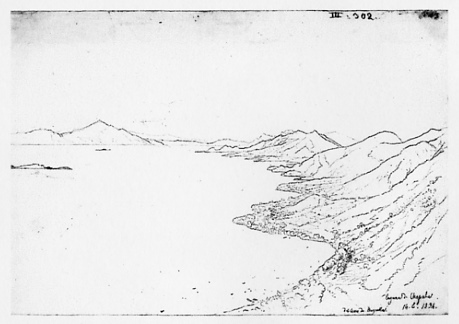 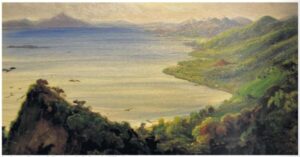 American artist and author Paul Alexander Bartlett (1909-1990) was a frequent traveler to Mexico who developed an obsession with Mexico’s ancient haciendas. Bartlett devoted years of his life to studying and documenting these haciendas (the mainstay of the colonial-era economy), gradually compiling an artistic record covering more than 350 of them throughout the country.

While it is not entirely clear precisely when Bartlett lived in the Chapala region, during his time there he painted and drew exquisite pen and ink drawings, such as this one of the Hacienda de Zapotitán, a short distance north of Jocotepec. Bartlett explored Mexico with his wife, poet and writer Elizabeth Bartlett (1911-1994). The couple first met in Guadalajara in 1941 and married two years later in Sayula. Their son Steven James Bartlett (born in Mexico City and now a widely published author in the fields of psychology and philosophy) subsequently accompanied them as they roamed all over Mexico looking for photogenic and noteworthy haciendas.

Steven Bartlett recalls that the family definitely lived for some months in the Chapala-Ajijic area in the early 1950s. He remembers that his father knew author Peter Lilley (who, with first one writing colleague and then another, used the pen-name of Dane Chandos to craft, among other works, Village in the Sun and House in the Sun, both set at Lake Chapala). The Bartlett family also revisited the Chapala area several times in the 1970s, during the time they were living in Comala, Colima. During these later trips, his father gave lectures about haciendas while his mother gave poetry readings.

Bartlett eventually compiled the beautifully-illustrated book The Haciendas of Mexico: An Artist’s Record, first published in 1990 and readily available now as a free Gutenburg pdf or Epub. The book has more than 100 photographs and illustrations made in the field from 1943 to 1985 and is an excellent starting point for anyone interested in the history, economics, art and architecture of Mexico’s colonial haciendas. For a brief review of this book, see The Haciendas of Mexico: An Artist’s Record on the Geo-Mexico website.

Bartlett’s hacienda art work has been displayed at the Los Angeles County Museum, the New York City Public Library, the University of Virginia, the University of Texas, the Instituto Mexicano-Norteamericano in Mexico City, and at the Bancroft Library, among other places.

Bartlett had dozens of short stories and poems published in magazines such as Southwest Review, Crosscurrents, Antenna, Etc, Greyledge Review, Prospice, and Queen’s Quarterly, and also wrote the short novel Adios, mi México (1983), and the novel When the Owl Cries (1960). Free online editions of several of his books are available via his author page on Project Gutenberg.