In terms of longevity, Charles Pollock’s artistic career eclipsed Jackson’s. Charles’ work has been significantly reevaluated in recent years, thanks in part to the determined efforts of his second wife Sylvia, and their daughter Francesca.

Charles spent a year in Ajijic on the shores of Lake Chapala in 1955-56, returning to the U.S. only weeks before Jackson was killed in a car accident at age 44. 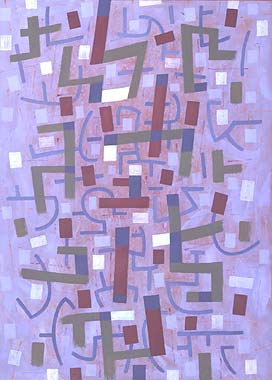 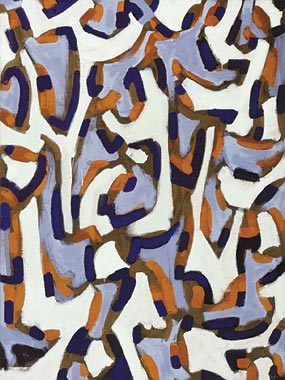 While in Ajijic, Charles produced numerous paintings and drawings, collectively known as the Chapala Series. The series was first exhibited more than fifty years later, in 2007, at the Jason McCoy Gallery in New York.

According to the exhibition blurb,

From 1955 to 1956, Charles Pollock, the older brother of Jackson, lived in Ajijic, a small village in Mexico. About ten years earlier he had abandoned his Social Realist style, inspired by his former teacher Thomas Hart Benton, searching for a new form of artistic expression. While teaching design, printmaking, calligraphy and typography at Michigan State University (1942-1967), he became increasingly focused on pure form and color relationships. It was in the quietude of Mexico’s Lake Chapala, when surrounded by ancient Mayan land, that he produced a body of work that would lay the groundwork for the art Pollock made from then on.”

“The Chapala series consists of thirty large drawings and fifteen paintings. All of these works are abstract and overtly inspired by calligraphy. They are immediately striking in their unique handling of light and form, which are employed to create distinct moods of atmospheric merit. In the paintings, both subtle color nuances and stark contrasts initiate a vibrancy that easily brings the Mexican mountain landscape to mind. Burnt sienna, earth brown, and translucent blues, for example, are fused into a harmonious mélange, while shapes reminiscent of simplified hieroglyphic fragments create a mysteriously codified language.”

While “ancient Mayan land” is something of a misnomer for the Chapala region of western Mexico, the peaceful surroundings of Lake Chapala certainly proved to be the ideal destination for Charles’ first, and artistically-fruitful, sabbatical year. In the words of art critic, Stephanie Buhmann,

… the Chapala works unmistakably reveal the true quality and caliber of Charles Pollock. They document a mature understanding of materials and visual vocabulary that in its consistency is as impressive as it is authentic. Charles Pollock succeeded in formulating a unique sensibility that at once can draw us in and remains inclusive no matter how abstract and mysterious its poetry.”

Born on Christmas Day in 1902 in Denver, Colorado, Charles Cecil Pollock was the eldest of five boys (Jackson was the youngest). The family moved frequently and Charles spent his early years in Colorado, Wyoming, Arizona and California.

At age 20, he moved to Los Angeles where he worked as a copyboy for The Los Angeles Times while attending classes at the Otis Art Institute. In California, he developed an interest in Mexican art, particularly in the murals of José Clemente Orozco and Diego Rivera. These, and other Mexican artists, would have a lasting impact on Pollock’s own art. 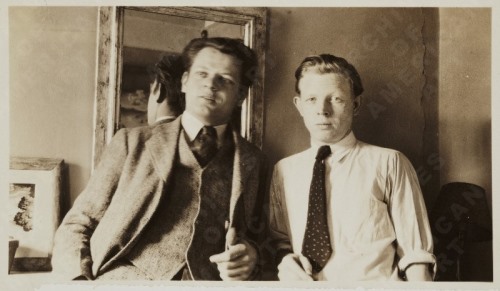 Pollock moved to New York in 1926 and studied at the Art Students’ League under Thomas Hart Benton, who became a life-long friend. In 1930, he helped persuade Jackson to move to New York and also study with Benton. In 1931, Charles married Elizabeth Feinberg (1902-1997); they had one daughter named Jeremy Capille.

In 1934, during the Great Depression, Charles and Jackson drive across the country to see what is happening for themselves:

Six weeks later, Charles and Jackson buy a Model T Ford for fifteen dollars and set out to visit their mother for the first time since their father’s death. (On returning to New York they would sell it for twice the cost.) Like so many other Americans they were taking to the road, not looking for work but to see how their fellow citizens were faring. Their elaborate itinerary, which took them through scenes of intense labor conflict such as Harlan County, Kentucky, and steel towns near Pittsburgh and Birmingham, indicates how politically engaged Charles had become. The ten letters he wrote to his first wife, Elizabeth, are really reports from the field to a keenly intelligent woman even more of an activist than he was. In the dry, hot landscape of Texas he is appalled by the grim condition of poverty-stricken blacks and Mexicans. “Even though this is beautiful country for these people [it] is indescribably barren and harsh.” (Source: All in the Family – Jackson Pollock)

In 1935, he moved to Washington DC to work with the Resettlement Administration and two years later he became a political cartoonist for the United Automobile Workers’ newspaper in Detroit, Michigan.

Between 1938 and 1942 Pollock was Supervisor of Mural Painting and Graphic Arts for the Federal Arts Project (WPA) in Michigan. After completing murals in the foyer of Fairchild Auditorium of Michigan State College (later Michigan State University) in 1942, the artist joined the faculty in the Art Department, where he taught design, printmaking, calligraphy and typography for over two decades. He created a department of fine printing, working with a Washington Hand Press, and was book designer to the Michigan State College Press from 1942 to 1959.

In 1945 he spent three months drawing and painting in the desert of Arizona. This experience marked a turning point in his career as he abandoned social realism and began experimenting with abstraction. To escape the artistic shadow of his younger brother, he exhibited work in 1952s in the Circle Gallery, Detroit, under the name Charles Pima.

Later in his academic career, Charles was an artist in residence at the University of Pennsylvania in 1965 and 1967, the recipient of a Guggenheim Grant in 1967-68 and a National Foundation of Arts Grant in 1967. 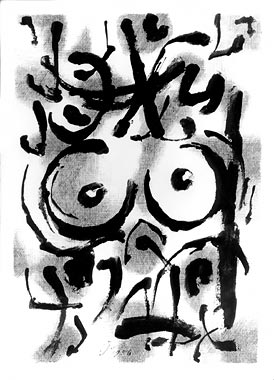 His visit to Ajijic was the first of two sabbatical years from his university positions; the other one was in Rome, 1962-63.

Charles married Sylvia Winter in 1957. Their daughter Francesca McCoy was born in Michigan ten years later. After Charles retired from teaching in 1967, the family lived in New York. In 1970 Sylvia was offered a job in Paris. The following year, the family moved to Europe, and never returned. Charles Pollock died in Paris on 8 May 1988.

In his latter years, while living in Paris, Charles Pollock had major shows in France, England and Belgium. His work is found in numerous collections, including those of the Whitney Museum of American Art and the National Gallery of Art.

Charles Pollock was a fine artist in his own right, but also deserves recognition for his considerable influence on the artistic career of his famous younger brother Jackson. Charles’ influence over Jackson is evident from the correspondence among family members that forms the subject matter of American Letters: 1927-1947: Jackson Pollock and Family (edited by Charles’ second wife Sylvia Winter Pollock). In his introduction to this volume, Michael Leja writes of Charles that,

His guidance helped Jackson early on, and the extent of his influence over his youngest brother is obvious from their exchange of letters in October 1929, the month of the stock-market crash. Charles told Jackson to forget the religion and theosophy he was learning from his high-school art teacher and accept the challenge of contributing to the progress of modern life and culture, He recommended looking up the art of Benton and the Mexican muralists in magazines such as The Arts and Creative Art and delving into psychology and sociology. Jackson took Charles’s advice very seriously: “I have read and re-read your letter with clearer understanding each time.” He “dropped religion for the present,” subscribed to the art magazines Charles mentioned, and fantasized about moving to Mexico City…”