Rose Georgina Kingsley (1845-1925) was the oldest child of the Rev. Charles Kingsley, the celebrated English clergyman and novelist, who contributed the prologue to her book South by west or winter in the Rocky Mountains and spring in Mexico.

Rose Kingsley had crossed the Atlantic to Colorado Springs in November 1871 to join her brother, Maurice, who was assistant treasurer of the company developing Colorado Springs. Even by 1872, there were less than 800 residents, so both Kingsleys were pioneer settlers.

The founder of Colorado Springs, General William Jackson Palmer, a railway entrepreneur, also owned a newspaper Out West which published several columns and sketches by Rose Kingsley. The Denver and Rio Grande train had been operating for only a week when Rose Kingsley boarded it en route to Colorado Springs. She quickly felt at home and rapidly made friends in the ever-changing community that she grew to love. She taught in the local school, begun by Palmer’s wife, Queen, for a short while, but did not enjoy the experience. Little did she realize at that time that she would, in 1884 – with the help of Dr. Joseph Wood, later Headmaster of Harrow – found The Kingsley School, in Leamington Spa, England. Rose Kingsley went on to write many more books, including A History of French Art, 1100-1899 (1899) and Roses and Rose Growing (1908).

When General Palmer decided in 1872 to examine possible routes for a railway linking Texas to Manzanillo, Rose Kingsley was invited to join his wife Queen and General William Rosencrans on the trip. The group landed in Manzanillo and then headed inland to Colima, Guadalajara, Guanajuato, Querétaro and Mexico City.

In chapter XVII of South by west or winter in the Rocky Mountains and spring in Mexico, Kingsley describes the route from Guadalajara past the northern shore of Lake Chapala on the way to Mexico City. Following a common convention of the time, she uses only initials to identify important people; several of the individuals referred to have been identified by historians. For instance, “Mrs. P.” is Mrs Queen Palmer, and Mr. C. is Mr. Duncan Cameron. Kingsley’s account of this route serves as an introduction to set the scene for so many other travelers, who would follow this exact same route from Guadalajara to Chapala in years to come. It is 1872…

“April 13.— Guadalajara to Ocotlan. At 6.15 A.M. we left hospitable Guadalajara, carrying away none but the pleasantest reminiscences of our stay of six days.

Pablo, a pleasant young fellow, who had been our cochero in Guadalajara, came with us as mozo, and was in a state of supreme delight at being armed with a Henry rifle and revolver. Mr. M. also came with us as far as La Barca.

The usual route from Guadalajara to the capital is by La Venta, Lagos, Leon, and Guanaguato; but for two reasons we chose the more southern route, past Lake Chapala and up the Rio Lerma. First, because the engineer’s party from the north (of whom we had heard nothing as yet, which made us very anxious) must pass along that route, and so be able to give a report on it. Secondly, because we were told the Chapala route was shorter and better, if there can be anything “better” in one Mexican road than another. Certainly, after the first few miles it was bad enough—rough and stony, and in the softer places there were clouds of dust.

At San Pedro [Tlaquepaque] we stopped and got three men as escort, and at 9.30 came to San Antonio, a hacienda where we changed mules, and had breakfast in a hut by the roadside. The women in the hut, which was only made of sticks and thatch, gave us eggs, frijoles, tortillas, and carne seca, in chilli colorado sauce, which for hotness almost beat the mole de guajalote at Atenquique. But besides these native viands we got capital chocolate, made from some cakes we had brought with us. So, on the whole, we fared well.

At 12.15 we came to the summit of a small pass (4850 feet), and there before us lay a splendid valley, rich with golden wheat-fields, with a fine river flowing through it on our left to the north-west; and we knew we had struck the great central valley of Mexico, commonly known as the Valley of the Lerma.

This valley is one of the richest portions of the Republic. Its length, between Guadalajara and Queretaro, is about 230 miles, and its greatest width (between Leon and the mountains of Michoacán), 60 miles. About one-tenth of the available land in it is under cultivation. Wheat, maize, and beans grow freely without irrigation, yielding good crops year after year without the slightest pains being taken to improve the soil. With irrigation and better farming two crops might be obtained; and when a market for the produce, and easy means of transportation are supplied, this tract will become one of the most important wheat-growing districts of the world. The amount of wheat which could be raised in this valley alone has been variously estimated from 500,000 to 1,000,000 tons yearly, equal to or surpassing the whole yearly yield of California.”

This is an extract from chapter 30 of “Lake Chapala Through the Ages: an anthology of travellers’ tales”, available as either as a regular print book or a Kindle e-book.

It is impossible to do justice in these few lines to the brilliance of Friedrich Heinrich Alexander von Humboldt, aptly described by Charles Darwin as “the greatest scientific traveler who ever lived”. He was born in Berlin, Prussia, in 1769 to a very well-connected family.

He studied political economy before turning to science at the University of Göttingen in 1789. One of his friends there, George Forster, had been scientific illustrator on Captain James Cook’s second voyage. This friendship undoubtedly reinforced Humboldt’s determination to undertake his own long distance travels. Humboldt systematically prepared himself for a life as a scientific explorer, first studying commerce and foreign languages at Hamburg, then geology and mining at Freiberg, followed by anatomy at Jena, as well as astronomy and the use of scientific instruments.

Humboldt spent five years in the New World, from 1799 to 1804. His visit to Mexico began in Acapulco on March 22, 1803, and lasted until he set sail from Veracruz for the United States on March 7, 1804. In the intervening months, Humboldt measured, recorded, observed and wrote about anything and everything, with remarkable industry and accuracy. He climbed mountains, burned his boots on active volcanoes, descended into mines, recorded geographical coordinates, and collected specimens and antiquities. He also drew a large number of maps, drawings and sketches. Humboldt’s Political essay on the kingdom of New Spain was the first systematic scientific description of the New World. It appeared in 1811, and marked the birth of modern geography in Mexico. His figures and ideas were used and quoted by writers for many many years.

On his return to Europe, he spent more than twenty years, mainly in Paris, writing and publishing his results. The crowning glory of Humboldt’s career was his five-volume Cosmos. Begun at age 76, it turned out to be a masterpiece, proposing conceptual generalizations, supported by the observations of the physical world he had made decades earlier.

Humboldt’s work was the foundation for the subsequent development of physical geography and meteorology. Developing the concept of isotherms allowed climatic comparisons to be made. He recognized that altitudinal differences in climate echoed latitudinal differences. His essay on the geography of plants related the distribution of plant forms to varying physical conditions. Finding that volcanoes fell naturally into linear groups, Humboldt argued that these presumably corresponded with vast subterranean fissures. In addition, he demonstrated the igneous origin of volcanic rocks for the first time.

Humboldt’s work awakened considerable European interest in the Americas and caused many later artists to travel to Mexico to draw and paint.

Humboldt died, at the age of 89, on May 6, 1859. His travels, experiments, and knowledge had transformed western science in the 19th century. Humanist, naturalist, botanist, geographer, geologist: Humboldt was all of these, and more.

A brief extract from Humboldt’s “Political Essay on the Kingdom of New Spain” is included in Tony Burton’s “Lake Chapala Through the Ages, an anthology of travellers’ tales” (Sombrero Books 2008).  This book has extracts from more than 50 original sources covering the period 1530-1910, together with short biographies of the writers, and an informative commentary setting the extracts in their historical context. 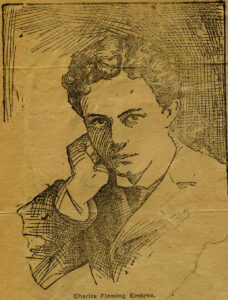