Frederick Starr (1858-1933), born in Auburn, New York, was a distinguished American anthropologist who visited Lake Chapala over the winter of 1895-1896.

Starr, whose primary scientific background was in geology, graduated from Lafayette College in 1882 and was appointed as a biology professor at Coe College.

A passionate anthropologist, with a particular enthusiasm for fieldwork, his research on several continents led to such diverse works as The Truth about the Congo (1907), In Indian Mexico, A narrative of Travel and Labor (1908) and Japanese proverbs and pictures (1910). 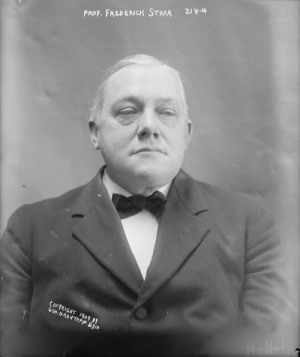 In Indian Mexico has extensive descriptions of Lake Pátzcuaro, Uruapan, Zamora and many smaller villages. A contemporary reviewer described this book as: “the work of a keen observer, whose description of the picturesque customs of the Mexican Indians has a deeper significance than a mere collection of interesting details. Combining the qualities of the trained ethnologist with a rare sense of the picturesque, he has given us an altogether admirable book.” American novelist Charles Embree (who wrote a novel set at Lake Chapala) wrote an appendix to In Indian Mexico.

Prior to In Indian Mexico, it had been assumed that traditional methods of making paper from tree bark were extinct in Mexico. Starr, however, discovered that the ancient craft was still practiced (as it is even today) in the Otomi village of San Pablito in the state of Hidalgo.

Prior to Starr’s three-month visit to Guadalajara and Lake Chapala over the winter of 1895-1896, he was quoted in The Salt Lake Herald as saying:

“I will first go to Guadalajara to study a submerged city in Lake Chapala, and “Mountain Idiots’ inhabiting the mountains nearby. This is a race of dwarfs which has been studied very little and my intention is to try to determine whether these people are racially small or have become so by disease. I will have the assistance of Archbishop Gillow, an authority on the dwarf races. In the interior of Guatemala the pigmies are said to live in caves and holes in the ground and speak languages not known to white men.”

This quote throws up various interesting sidebars. Rumors of a submerged city in Lake Chapala had been circulating for a while in the U.S., presumably mainly on the evidence of the large amount of pottery fragments recovered from the lake bed whenever the water level fell. Archbishop Gillow is a particularly interesting figure in Mexican history, whose story is told in chapter 22 of my Mexican Kaleidoscope: myths, mysteries and mystique. 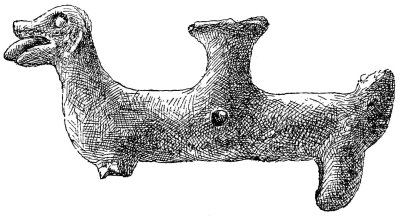 Following his short visit to Lake Chapala over the winter of 1895-1896. Starr’s research paper, The Little Pottery Objects of Lake Chapala, Mexico described (with illustrations by M. K. Seralian) ollitas and other pottery items found near Jocotepec at the western end of the lake. He collected and studied 261 individual specimens and considered several alternative possibilities before concluding that they are likely to be “offerings made
to the lake itself or some spirit resident there-in?”

Starr recognized that changes in lake level might be common and more than sufficient to explain why the pieces were now found at some distance from the current shoreline:

“So far as their presence in the lake is concerned it is possible that the lake’s level may have risen, covering an original place of deposit on the dry land. The spot is almost within sight of the active volcano of Colima, and changes of level, through volcanic or other igneous agency, in the waters of the lake are not improbable. The old schoolmaster at Chapala insists that the town of Chapala has long been slowly sinking, and that half of it has already been engulfed by the lake. He also claims that the god formerly worshipped at Chapala was a little god, a child god, and that the little vessels were offerings to him.”

In December 1895, mid-way through his visit, Starr attended a performance of the Pastores (Shepherds), a Passion Play in Chapala . Starr included a detailed description of this event in an article published the following year in The Journal of American Folklore. Starr considered it to be “probably entirely foreign”, compared to Tastoanes and Conquista festivities which combined Indian and imported elements. According to Starr:

“The play is fairly recent at Chapala. Only a few years ago a young fellow from the village saw it at some other town; he learned it by heart and trained his band of actors. This illustrates the way in which dramas travel – even in Mexico – from town to town.”

Fifty years later, another anthropologist, George Barker, was to witness (and later write about) another unique aspect of Chapala’s Christmas-time celebrations.

This profile is based on an extract from chapter 40 of my Lake Chapala Through the Ages: an anthology of travelers’ tales.