Howard Fryer’s memoir, El Nitty Gritty, published in 2010, is perhaps the most deliberately provocative account of life at Lake Chapala ever written. Who was Howard Fryer, and what did he write?

Who was Howard Fryer?

Born in Reading, UK, on 11 March 1941, Fryer was only a young child when he moved with his mother to Toronto in 1947. His mother and stepfather subsequently renovated the historic Aberfoyle Mill into a fine restaurant. Howard’s half brother, Peter Owens, was a hot air balloon pilot who held several ballooning world records.

Fryer trained as an industrial engineer, and worked for Continental Can Company, before starting his own company, Howard Fry and Associates, to invent and market products. The numerous patents registered to Fryer and his company include one for lightweight, washable, “inflatable, double-walled resilient sleeves for use in forming surgical casts,” and for a wearable “game playing apparatus.” 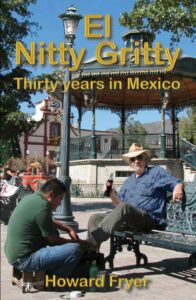 According to an article in El Ojo del Lago, Fryer was an amateur sculptor and held three solo exhibits of works in stone and steel in Toronto. (If anyone can supply further details of any of these exhibitions, please get in touch!)

Fryer first arrived in Mexico, driving a new Honda, in early 1977, and headed straight for Roca Azul, near Jocotepec, where his mother had retired and built a house a few years earlier.

Fryer fell in love with Mexico, and with a beautiful mexicana: Thelma Yolanda (Yoly) Esqueda Aguilar (1945-2007). When the couple married in Texas in September 1981, their witnesses were Jocotepec-based artists Georg and Phyllis Rauch.

Fryer and his wife joined with Morley Eager (of Posada Ajijic fame) to help run the La Quinta hotel in Jocotepec. When Eager decided to focus exclusively on Posada Ajijic, the Fryers took over managing La Quinta. Fryer then had a specialist pizza oven made in Guadalajara so that he could introduce pizzas to Jocotepec.

After five years, La Quinta closed its doors in December 1984, when the building’s owners were only prepared to renew the rental contract at a significantly higher rent. A few years later, the same owners first destroyed the architectural integrity of the historic building, and then demolished it. 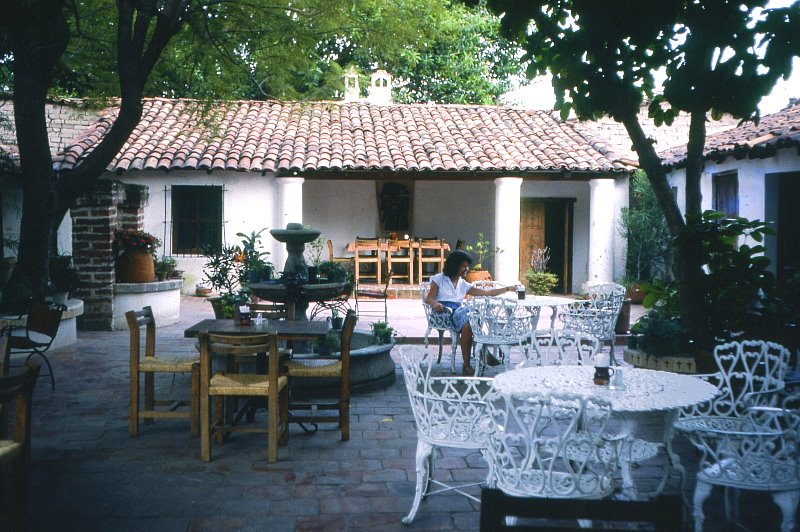 Shortly after leaving La Quinta, the Fryers opened “Los Naranjitos” restaurant at Calle Hidalgo #10 in Ajijic, where the main entrance door had previously served as a jail door in Jocotepec. The restaurant became deservedly popular, famed for the best pizzas in the region. Fryer’s third foray into restaurants was to run (briefly) the El Faro restaurant at the sports club subdivision in Roca Azul.

After leaving the restaurant business, Fryer was prompted by the then nascent raspberry-growing craze in Jocotepec to start a jam-making business using the fruit that was rejected for export. Fryer and his associates, with their four full-time staff, developed a range of gourmet products under the Jacaranda brand. Fryer became one of the first local businesses to be awarded a contract to supply a major international retailer that had just entered the Guadalajara market: Wal-Mart.

Howard and Yoly were generous givers to the local community in Jocotepec. Their most lasting contribution was to hold a Christmas lunch for the town’s old folks, a tradition which continues to this day. They prepared and served a full festive meal to 20 Jocotepec seniors the first year, 100 the following year, and 350 in year three.

What did Howard Fryer write?

El Nitty Gritty is a colorful collection of 66 short pieces—most of them anecdotal, some verging on the bizarre—written with affection and good humor.

Among Fryer’s many business cards was one for the (fictitious) “International Society of Freelance Journalists” which named him as a writer for National Geographic! This helped him gain access to some unlikely people and places.

Several characters who would otherwise be forgotten grace the pages of this book. They include Carla Manger, described by Fryer as a former ballet dancer, who had been “one of Hitler’s favorites and danced for him on numerous occasions,” and “Pipeline” Jimmy, an American who installed the water system in Yelapa and died of a heart attack while driving his Cadillac convertible past Piedra Barrenada. And then there is the tale of an honorary Canadian consul, who, when his wife was out of town, accompanied Fryer for a raucous evening with several young ladies at the infamous Kiko’s bar in San Juan Cosalá.

One particularly interesting story explains how the Reina Guadalupe, a faux-paddlesteamer large enough to ferry 350 people and 6 cars across the lake, ended up abandoned on Jocotepec beach. It was still there, rusting away, when I first visited in 1980.

In addition to several stories relating to La Quinta, Fryer includes some self-effacing stories about his numerous business ventures in Mexico, such as making jewelry, preserving insects in gold and silver, hoarding peso coins post-devaluation (hoping to make a fortune out of their metal value), and trading anything from which he thought he might turn a profit—from Mexican orchids, handicrafts and antiquities to Nayarit opals and Chiapas amber.

Howard Fryer, one of Lakeside’s more enterprising, talented and extraordinary characters, died in Penticton, BC, on 14 November 2013.

In July 1923, a few days before the British author D. H. Lawrence and his wife Frieda left Chapala, they arranged an extended four-day boat trip around the lake with friends including Idella Purnell and her father, Dr. George Purnell. 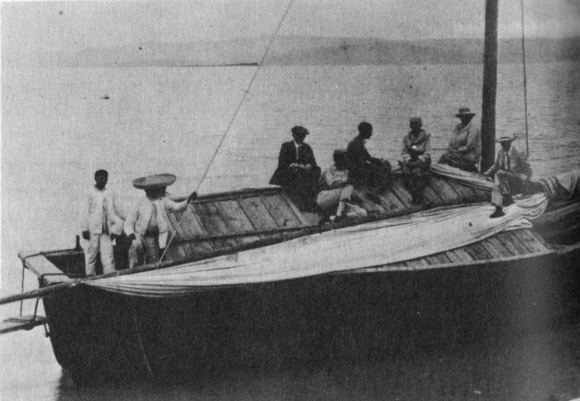 The group that assembled at the pier in Chapala to board the Esmeralda on 4 July 1923 comprised:

Idella Purnell later recalled how “we took off amid the applause of the population of Chapala, a large part of which was on the beach.” (quoted in Bynner, 169)

Unfortunately, the trip did not prove to be without its challenges. The boat ran into very bad  weather overnight, causing several of the group to suffer from motion sickness, before the Esmeralda finally limped to shore on the south side of the lake near Tuxcueca.

Bynner was particularly ill, so Idella accompanied him back to Chapala on the regular (and larger) lake steamer. While friends escorted Bynner to a hospital in Guadalajara, for an operation to resolve an infected fistula, Idella remained in Chapala to greet the remaining members of the party when they finally made it back to port a few days later, having spent a second night near Tizapan el Alto and a third night near La Palma. On 9 July, the Lawrences left Chapala for Guadalajara en route to the U.S.

The trip on the Esmeralda would not quickly be forgotten. In The Plumed Serpent, Lawrence not only describes how the boat was pitched about by storms on “the chalk-white lake” but also succinctly depicts the boat’s departure:

“Barelegged sailors began to pole the ship from the shore. They leaned heavily on the poles, and walked along the rims of the vessel. Slowly she began to move upon the waters, in the shallows. Slowly, she was leaving the shore, and the throng.

Two other sailors swiftly began to hoist the huge, square white sail. Quickly, yet heavily it rose in the air, and took the wind. It had the great sign of Quetzalcoatl, the circling blue snake and the blue eagle upon a yellow field, at the centre, like a great eye.”  – (The Plumed Serpent, chapter XVIII)

Bynner, in Journey with Genius, includes far too many details of his own malaise, but also quotes this passage from one of Idella Purnell’s later letters, recalling the morning after the storm:

“The next thing I knew my father was excitedly summoning us all to come and see a water snake. I couldn’t see why a water snake was of any interest, now why we had to be awakened so early to see one; there was only a faint gray light under our shelter. But obediently we all went on top of the hatch. The water snake was a waterspout, a black funnel reaching from the lake to the sky, or rather a chimney, with an elbow in it about half way up. The lake was now gray and angry, a thin rain spattered down, and it was cold. My seasickness was upon me again.” (quoted in Journey with Genius, 171)

Lawrence’s wife Frieda, in her memoirs, Not I, But the Wind…, had her own recollections of the trip

“We went into a huge old Noah’s Ark of a boat, called “Esmeralda”, on the Lake of Chapala, with two other friends and Spud. Three Mexicans looked after the boat. They had guitars and sang their melancholy or fierce songs at the end of the boat. In the evening we slowly drifted along the large lake, that was more like a white sea, and, one day, we had no more to eat. So we landed on the island of the scorpions, still crowned by a Mexican empty prison, and only fit for scorpions. There Lawrence bought a live goat, but when we had seen our Mexican boatmen practically tearing the poor beast to pieces, our appetites vanished and we did not want to eat any more.”  – (Not I, But the Wind…, 140-141)

The various minor discrepancies in the diverse accounts of this boat trip are easily forgivable, given the discomforts suffered during the expedition, and the relatively short time that the writers were in the area. For example, in her description, Frieda appears to overlook Bynner’ presence, and to conflate two separate islands, the Isla de Mexcala (Mezcala Island) and Isla de los Alacranes (Scorpion Island).

Author and poet Harold Witter Bynner (1881-1968), known as “Hal” to his friends, had a lengthy connection to Lake Chapala extending over more than forty years. He first visited the lake and the village in 1923, when he and then companion Willard Johnson were traveling with D.H. Lawrence and his wife.