The American poet Witter Bynner, who first visited Chapala in the company of D.H. Lawrence in 1923, purchased a house in the town in 1940. The original address of the house, close to the plaza on the main street down to the pier, was 411 Galeana, but the current name of the street is Francisco I. Madero.

Bynner’s home had previously belonged to the famed Mexican architect Luis Barragán (1902-1988). It had apparently belonged to the Barragán family since the end of the 19th century and had been transformed – by Luis Barragán himself, with the assistance of Juan Palomar y Arias – in 1931-32. (We will consider Barragán’s connections to Lake Chapala in a future post). 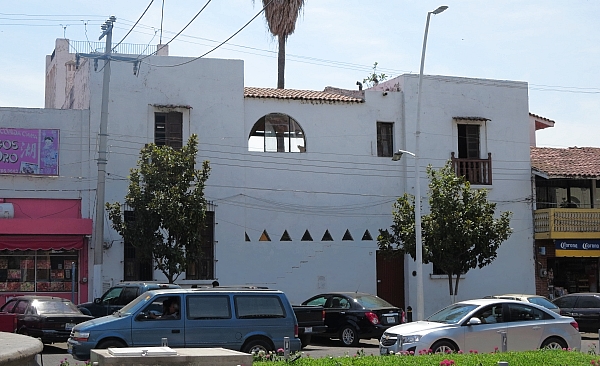 Bynner and his companion Robert “Bob” Hunt became regular visitors to Chapala for several decades. Their mutual friend, artist John Liggett Meigs, is quoted as saying that, “Bynner’s house was on the town’s plaza, a short distance from the lake. Hunt restored the home and, in 1943, added an extensive rooftop terrace, which had clear views of Lake Chapala and nearby mountains. It became Bynner and Hunt’s winter home.” (Mark S. Fuller, Never a Dull Moment: The Life of John Liggett Meigs, 2015). It is worth noting that, while the house was on the plaza when Bynner bought it, the center was remodeled (and the plaza moved) in the 1950s (see comment by Juan Palomar below) so that the house is now a short distance south of the plaza, though it is very close.

According to some sources, Bynner lent his home in Chapala to the then almost-unknown playwright Tennessee Williams in the summer of 1945. During his time at Lake Chapala, Williams wrote the first draft of A Street Car Named Desire.

At some point after Hunt’s death in 1964 and Bynner’s serious stroke in 1965, or upon Bynner’s death in 1968, the house in Chapala (and its contents) was purchased, jointly, by Meigs and another well-known artist Peter Hurd.

Meigs was particularly taken with the fact that the house had once belonged to Barragán, whose architectural work had been an inspiration for his own architectural designs. Mark Fuller writes that,

“the house had two floors, the rooftop terrace that Hunt had added, and a “tower” overlooking Lake Chapala. The other buildings on the block included a “wonderful cantina“, which became a supermarket; another two-story house next door, with a high wall between that house and Bynner’s courtyard; and a two-story hotel on the corner. However, after John [Meigs] and Hurd bought Bynner’s house, they discovered that the owners of the hotel had sold the airspace over the hotel, and, one time, when John arrived, he discovered a twenty foot by forty foot “Presidente Brandy” [sic] advertisement sign on top of the hotel, blocking his view of the lake. John said that that was when he and Hurd decided to sell the place. While he had use of it, though, he very much enjoyed it.”

In 1968, Hurd rented the house out to another artist Everett Gee Jackson. By a strange coincidence, Jackson had rented D.H. Lawrence‘s former residence in Chapala way back in 1923, immediately after the great English author left the town!

For a time, the Barragán-Bynner-Hurt/Meigs house was temporarily converted into warehouse space for a local supermarket, but is now once again a private residence.

5 Responses to “The Luis Barragan-Witter Bynner house in Chapala”