Among the many non-professional artists who found creativity while living in Ajijic, Raphael Greno deserves a special mention. Greno completed several striking woodcuts of subjects rarely depicted by other artists. How he acquired his skill is unclear but the end results are high quality and speak for themselves.

To date, four woodcuts by Greno have come to light, two on bluish paper and two on yellowish paper.

One on those on bluish paper is a portrait of American author Neill James who wrote Dust on My Heart and lived in Ajijic from the 1940s to her death there in 1994. Greno’s landscape-format woodcut shows James sitting in an equipal in front of her typewriter. The typewriter is on a rustic wooden table and James is cradling a pet parrot in her left hand. A second pet parrot is looking on from the tree branches that frame the central image. 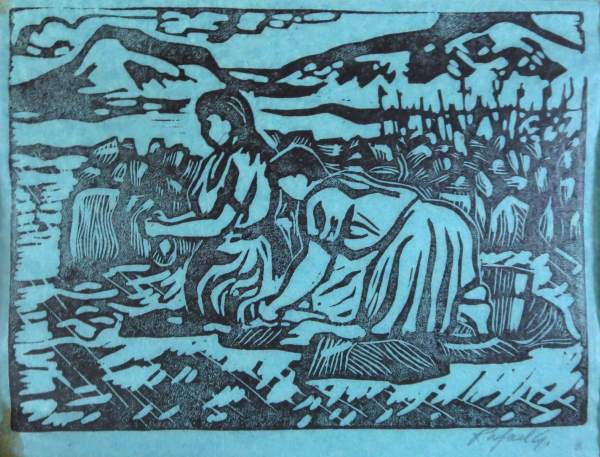 This second woodcut, of similar format, shows two women kneeling as they wash clothes on the shore of the lake. Distant mountains help frame the scene.

The two woodcuts on a yellowish paper show two distinct stages in the production of silk, an industry begun by Neill James in Ajijic in the 1950s. A landscape format woodcut, entitled “Deshilando los capullos”, depicts three women unraveling the silk from the cocoons. A portrait format woodcut, “Hilando con malacate,” shows an older woman using a spindle to spin the silk thread. 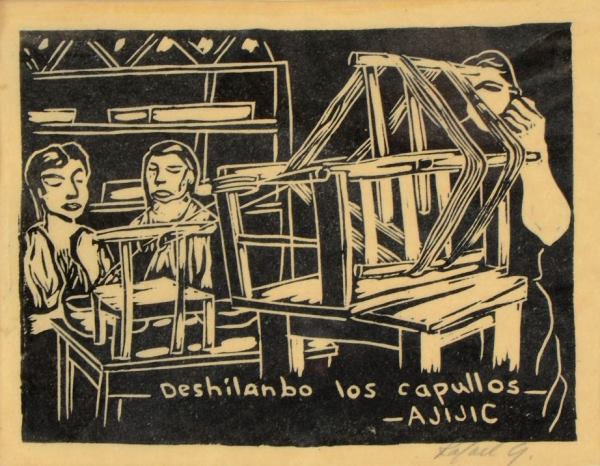 All the woodcuts are signed “Rafael G.”, the Spanish spelling adopted by Raphael while he and his wife were living in Mexico. Although none of the woodcuts are dated, the two silk-related works must predate 1960 since they are mentioned by Neill James in a letter dated 22 May 1960. Clearly, the Grenos had personal knowledge of Ajijic well before they moved there to live in the late 1960s.

Raphael Valentino Greno was born in Lisbon, Ohio, on 30 January 1909; his father was Italian, his mother American. He died in San Bernadino, California, on 31 December 1982. By 1920 his father was out of the picture and he (and possibly his mother) were living with an aunt in Arnold, Pennsylvania. The family later moved to Los Angeles where Raphael graduated from the Manual Arts High School in 1927. He then spent four years (1927-1931) at Oregon State College in Corvallis, Oregon. During his time there, he spent part of one year as one of several “cadets” on board the President Jefferson on a round-trip from San Francisco to Yokohama, Japan.

At college, Greno was as interested in writing as in art. In 1930, he had “What Price Cleanliness”, a short piece about the interior workings of a commercial laundry, published in the State College magazine. Greno was a member of the Pi Kappa Phi fraternity.

After college he returned to Los Angeles where he worked as a clerk. For the 1940 census, he gave his occupation as a writer of fiction, working from his home at 1547 N Sierra Bonita. Later that year he was working in advertising.

In 1941, he married Violet E. Evans, originally from Colorado and then resident in Hollywood, California. Violet, known as Vee in Ajijic, was born on 4 August 1917 in Joycoy, Colorado, and died 16 November 1990 in San Bernardino, California.

By 1944, the Grenos were living at 1404 N Gardner St and Greno was working as an “investigator.” Greno trained as a census crew leader for the 1950 U.S. census.

Fifteen years later, the family was living in Redlands at 525 Esther Way, where Violet (Vee) taught school. In the mid-1960s Vee taught art and crafts at Cope Junior High School in Redlands, California. She occasionally exhibited her own work, examples of which were included in two group shows at the Lyon Art Gallery in Redlands – one of works by teachers of art (March 1965) and another of flower-related art the following month. Greno also had a “modern oil” painting – “Mexican Market – accepted into the All-California Art Exhibit held in San Bernardino in March 1966.

While living in Ajijic in the mid-1970s, Vee gave regular Friday morning art classes for a couple of years at the Galería del Lago. Katie Goodridge Ingram, who was director of the Galería del Lago at the time, recalls that Vee Greno also made beautiful necklaces.

Raphael Greno also wrote several short plays for TLAC, including Cushions, presented at a Dinner Theater event at Posada Ajijic in October 1977 and Buttons, on the bill to be performed there the following August.

After living in Mexico in the 1970s, the Grenos moved back to the U.S., to Yucaipa, a short distance from San Bernardino, California.

Raphael and Vee Greno had two children: Anthony and Eugenia. Anthony Evans Greno (1943-2009) completed a degree in Latin American History at Berkeley and a Masters in Journalism at Columbia before becoming Mexico correspondent for several newspapers including the San Francisco Examiner and the Chicago Tribune. Tony Greno’s first wife, Lucretia Leduc Zenteno, was a Mexican society news reporter from the state of Tabasco working in Mexico City. Tony’s sister, Eugenia Vee Greno (1945-2008), lived the latter stages of her life in Honolulu, Hawaii.

Rafael’s lively woodcuts of Ajijic are just one of the Grenos’ many and varied contributions to the lively artistic scene in the village in the 1960s and 1970s.

My sincere thanks to Katie Goodridge Ingram and Dale Palfrey for sharing their memories and knowledge of the Grenos and to the Lake Chapala Society for allowing me access to its Neill James Archive. 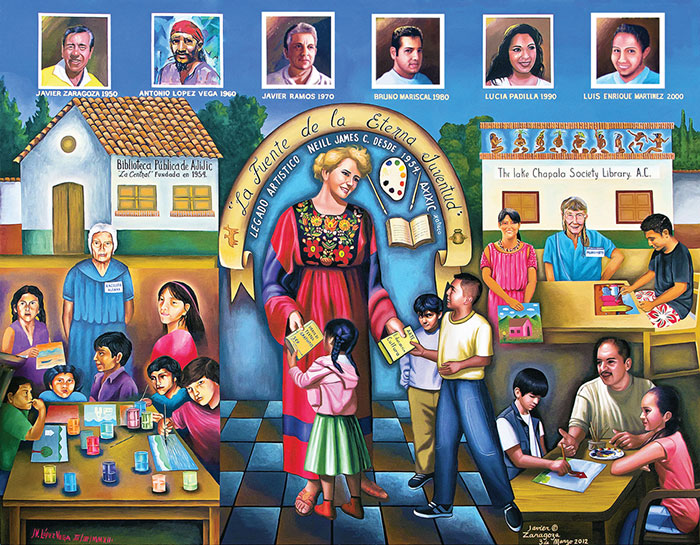 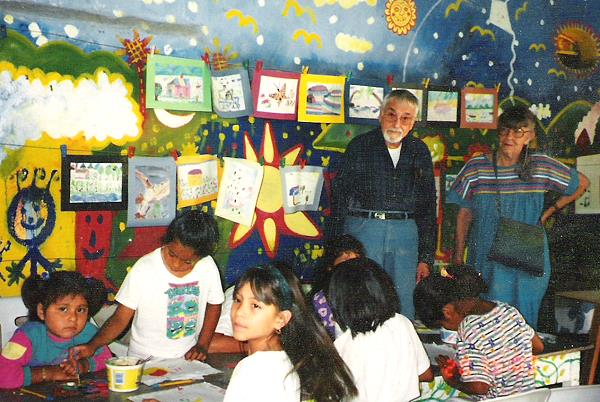