Artist Robert Bateman Neathery and his wife Ellie moved from California to Jocotepec in February 1965, and lived there the remainder of their lives. Bob Neathery continued to paint until about 1983 when his health began to deteriorate. He painted mainly genre scenes of Mexican village life, as well as portraits, and is especially remembered for his “voluptuous golden nudes” (see image), which often rely on a palette of brown-beige colors. 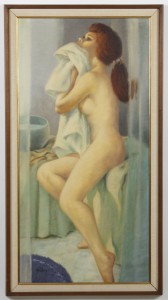 Bob’s early life was spent partly in El Paso, Texas, (where the family resided when he was 12 years of age in 1930), partly in Muskogee (where they were living in 1935) and by age 19, Bob was living in Denver, Colorado, where he attended art school at the University of Denver.

Bob supported his art by working at a series of jobs including telegraph operator for the Denver and Rio Grande Railway, a sign painter of giant ice cream cones, automobiles and ladies drinking milk, a technical illustrator for North American Aviation, a sculptor of lamps at Gumps in San Francisco, and as manager of a co-op art gallery in Redondo Beach.

Bob and Ellie married on 28 November 1939 in Denver, Colorado, but by 1946 had moved to San Diego in California.

In November of that year, an exhibit at La Jolla art center in San Diego featured two “arresting sculptures”, one the work of Bob Neathery and the other sculpted by his elder sister Paula Nethery Rohrer (aka Paula Neathery Hocks) . The pieces are mentioned in a review of the exhibition in the San Diego Union.

In November 1958, Neathery exhibited at the second Palos Verdes Outdoor Art Show, sponsored by the South Bay Community Art Association, and at a Book and Art Fair, sponsored by the Pacific Unitarian Church of Torrance. 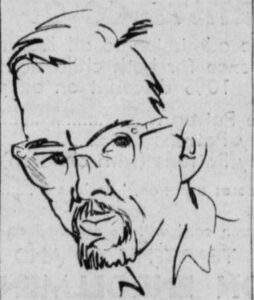 After retiring from North American Aviation Corp. in 1959, Neathery became a full-time artist. He was a founding member of the Artists Cooperative Gallery at 121 S. Pacific Ave., Redondo Beach, which opened in July 1959. Along with  Gladys Bruchez and Marco Antonio Gomez, Neathery participated in a three person show at the gallery in January 1960.

The following year, in May 1961, several members of the Artists Cooperative Gallery, including Neathery (who was by then the Gallery Manager), showed their works at the  the opening of the Peninsula Center in Palos Verdes. The Cooperative Gallery moved their gallery to the Peninsula Center later that year, to “the contemporary, handsome TKM building, designed by Carver L. Baker & Assoc., at 27715 Silver Spur Road, Rolling Hills Estates.” Interviewed by a local journalist at about that time, Neathery declared that, “In a time of tension and strife and hate, my belief must be in the good and beautiful. I paint and create beauty as an antidote for the bad forces at work in the world.”

Neathery held a two man exhibit, with Byron Rodarmel at the Artists’ Co-op Gallery in August 1962; later that month both men showed works in a group exhibit at the Western Bank office in Torrance.

In November 1963, Neathery held a solo show of his paintings at the Angus Paint store in the Peninsula Center. By then, Neathery was president of the South Bay Art association and was represented in Los Angeles by Village Galleries in the Crenshaw district, in Carmel by Zantman Galleries, and in Monterey by Hidden Village. He was continuing to give painting classes in oils and watercolors. The following month, Neathery exhibited in a group show, the Holiday Art Festival, held at a private home in Palos Verdes, an event held for 475 guests, and at which Donald Totten (another artist with a connection to Lake Chapala) was a fellow exhibitor.

Bob and Ellie Neathery continued to live in California (in Redondo Beach) until their decision to relocate to Jocotepec in about 1965.

Two years later, in 1967 a thief entered their lakeside home, while they were out, and stole one of Bob’s paintings: a 24 x 30″ oil painting, from the couple’s bedroom, of a mountain landscape with a woman washing in a stream; the thief ignored appliances, clothes and everything else.

Bob Neathery held a solo show of 31 drawings and paintings in Guadalajara, at La Galeria (Galeria 8 de Julio) in April 1968. Author and art critic Allyn Hunt‘s review of the show in the Guadalajara Reporter praised Neathery as, “a sensuously exploratory painter”, adding that, “When he’s good he’s immensely exciting”. Hunt felt that Neathery’s most successful works included “Blue Plant” and “Kaleidoscope”, “in which six nude figures seem to move languorously in front of and behind one another in a sensual haze of muted blues, yellows and oranges.” According to Hunt, Neathery “feels highly influenced by the country’s “pow” lighting, as he calls it, and by the different cultural aura he finds here.”

In August 1968, Neathery had his works on show at the Holiday Inn in Chula Vista, mid-way between Chapala and Ajijic.

Later that year, in November, “La Galería” in Guadalajara held another show of Neathery’s works, immediately before a showing in the same gallery of works by Neathery’s Jocotepec neighbor John Frost. Allyn Hunt is again on hand to review the latest works by an artist who “possesses an excellent drawing hand and an ingenious drafting eye”, and is “at his best when pushing these talents into new territory.” Among Hunt’s favorite works were “The Vault” and “Model Resting”. In The Vault, “we see segments of walls, stairs, vaults, dim forms that are organized in such ways as to be haunting without being menacing, shadowy without being darkly somber.”

In 1973, Neathery was appointed “gallery director” for the Galeria del Lago de Chapala, A.C., whose president was Arthur Ganung. In September of that year, Neathery exhibited “recent oils and watercolors” at El Tejaban (Zaragoza #1, Ajijic). That display comprised 32 works including nudes, landscapes, character studies and scenes from Mexican village life.

A group exhibit, the “Nude Show”, opened in February 1976 at the Galeria del Lago in Ajijic, which included a painting by Robert Neathery, as well as works by a long list of local and Guadalajara artists, among them Jonathan Aparicio, Arevalo, Dionicio, John Frost, Guillermo Guzmán, Gail Michel, John Peterson, Georg Rauch and Synnove Schaffer (Pettersen).

[Note: Bob Neathery’s elder sister Paula Neathery Hocks (1916-2003), a noted book artist, poet and photographer, visited him several times in Mexico, presumably staying in Jocotepec. As her obituary states, “Her artist books and photographs have been featured in shows internationally and are included in numerous collections such as the Tate Gallery and the Victoria & Albert Museum in London, U.K.; the Whitney Museum and the Museum of Modern Art in New York; contemporary book art collections at the Getty Museum in Santa Monica California, and the Ruth and Marvin Sackner Archive in Miami, Florida.; as well as special collections at the University of Iowa and the Bridwell Library at Southern Methodist University in Dallas.”]