Alice de Boton (1906-2010) started an art school in California, painted in Ajijic in the early 1970s, and continued to paint regularly until well after celebrating her 100th birthday.

Born in Jaffa, Palestine, on 25 December 1906, de Boton painted from childhood. After her family moved to France, she took painting classes in Paris and gained a law degree, as well as a certificate in chemistry.

In 1939 she married Jean Robert Bernard, a French biochemist. When the second world began, the couple fled Paris for the relative safety of southern France.

The disruptions of the second world war ended the family’s ambitions for a secure life in France. In the turmoil of the war, Alice, who spoke five languages-English, Spanish, French, Italian and Hebrew—also picked up a smattering of German. Very near the end of the war, she and her husband found themselves having to care for her young niece, Aline, whose father (Alice’s brother, Yves) had been captured and killed while participating in the French resistance. Alice and Robert later formally adopted Aline, and the blended family left Europe in 1947 for a new beginning in the U.S. 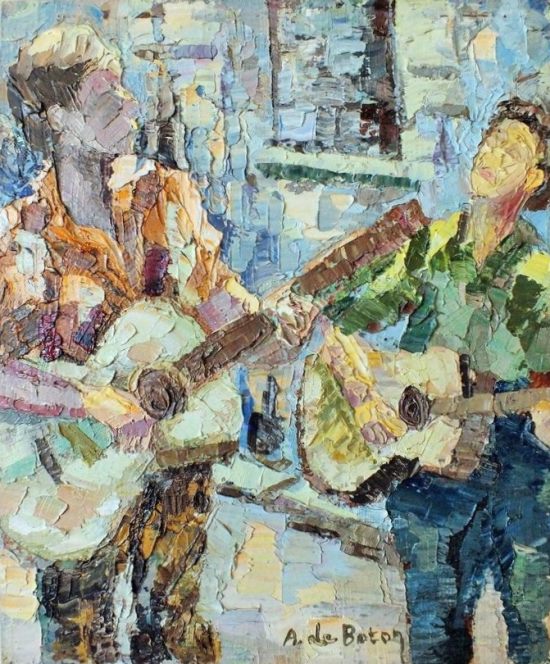 They boarded a liberty boat in Antwerp, Belgium, on 29 May 1947 and landed in Houston on 14 June. Mistakenly, the ship’s passenger manifest listed Aline, then 9 years old, as the “granddaughter” of Alice Bernard (chemist, aged 40) and Jean Robert Bernard (44-year-old biologist). They settled in San Francisco, where they had friends. Robert found employment as a biochemist and Alice pursued her interest in art, teaching and painting. In 1953, Alice began the Peninsula Arts and Crafts school in San Mateo, California, staffed by a number of noteworthy Bay Area artists. She sold the school four years later in order to move to Berkeley and open her own gallery.

After Robert retired in 1969, he and Alice lived for several years in Ajijic. Robert (1903-1993) took up carving and sculpture, a decision which had unusual consequences for Ajijic native Fernando García, who worked for him. After watching his employer at work, García expressed an interest in learning how to carve. He then worked by candlelight late into the night for several weeks to complete several “small primitives of extraordinary beauty and sensitivity.” When shown at the grand 1971 Fiesta de Arte, held at the home of art patrons Frances and Ned Windham, all of García’s sculptures sold within minutes. 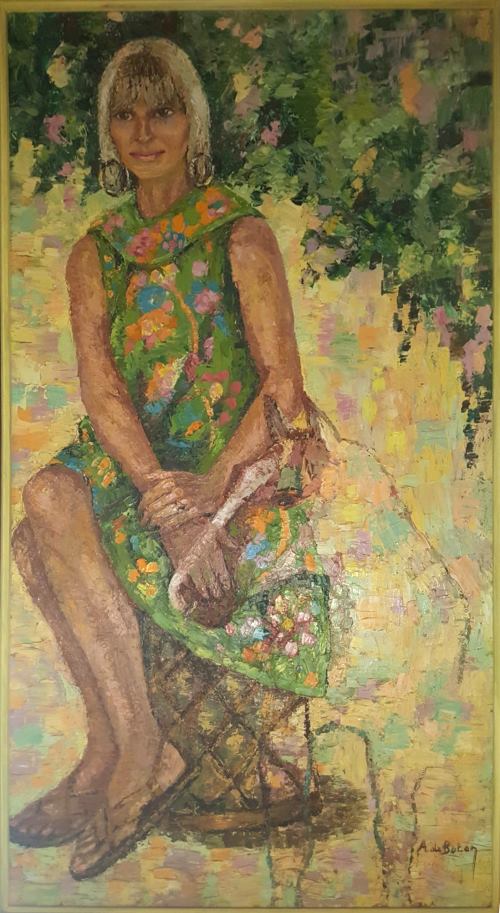 Within months of moving to Ajijic, Alice had three of her works—two oils and an acrylic—selected by a four-person jury for inclusion in the Semana Cultural Americana (American Artists’ Exhibit) at the Instituto Cultural Mexicano Norteamericano de Jalisco, A.C. in Guadalajara. The exhibit was comprised of more than 70 works in total by 42 US artists (working in Guadalajara, San Miguel de Allende and at Lake Chapala) and opened on 27 June 1969.

A list of Lake Chapala artists in 1971 gave Alice de Boton’s address as Aquiles Serdán #1, Ajijic. The following year, she held a solo show at the Museo de Historia (now the Centro Cultural Patio de Los Ángeles) at Cuitlauhuac 305 in Guadalajara. Her “social commentaries” and abstracts in oils, acrylics, collages and assemblages, were praised for their “imagination, originality and artistic skill.”

In February 1973, Alice held an exhibit of “recent paintings” and tapestries at the Hotel Camino Real (now Hotel Real de Chapala) in Ajijic. Allyn Hunt considered that the artists was “at her very best in this show when executing scenes with a pallet knife, casting a deep mosaic of blade strokes to form a face of a figure.”

Robert and Alice de Boton sold their Ajijic home in 1974, and were about to move to the state of Guanajuato, when they changed their minds and opted to rent a residence-with-studio in Ajijic. The de Botons did leave Ajijic permanently not long after that, to live first in the Yucca Valley in Southern California, and then in Israel. They returned to the US in 1989 to live in Columbia, Missouri, close to their adopted daughter, Aline.

De Boton continued to paint and exhibit, and held several solo shows in Columbia. Even moving to a retirement home did little to reduce her artistic creativity or productivity, and the home devoted one entire third-floor wall to her paintings.

During her long and prolific career, Alice solo shows in several countries. Working in a variety of media, she utilized her specialist knowledge of chemistry to develop innovative techniques in encaustics, where a heated mixture of pigment and molten beeswax is applied to a suitable surface, such as prepared wood.

Alice de Boton’s works have found their way into many private collections in Mexico, the U.S. and Israel. Among her many awards was a Degree of Honor awarded by the Society of Western Artists.

My thanks to Sunny Russell for permission to use the photograph of Alice de Boton’s portrait of Gloria Marthai.