Gail Michel, as she was then known, arrived in Ajijic in 1961. Her talents as a businesswoman and dress designer, enabled her to start a store, El Ángel, close to the Posada Ajijic, that became so successful it was featured in the pages of Harper’s Bazaar and Vogue Paris. Alongside her boutique, Gail continued to develop her own art and was a regular exhibitor in local group shows. Seventeen years and four children later, she moved back to the U.S.

Born Julia Gail Hayes on 3 March 1935 in the small South Dakota town of Wasta, her university education at Washington State University in Pullman, Washington, was interrupted by falling in love with a fellow student, Frank Clifford Michel, a psychology major. The young couple were married in Pullman on 12 December 1955 and had a son, David, but the relationship did not last. Gail, a competitive swimmer, gave swimming lessons to help finance university, completed her degree, obtained a divorce and, in 1961, after receiving a letter from a Colorado friend about the beauties of Ajijic, traveled to Mexico with David to start a new life. 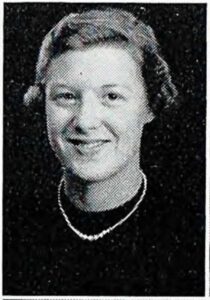 In Ajijic, she quickly found employment at Los Telares, Helen Kirtland’s handlooms business which had begun operations in the late 1940s. She also soon made many very good friends and decided to stay in the village, starting a serious, long-term relationship with a local contractor, Marcos Guzman, with whom she had four children.

During her time in Mexico, Gail was usually known as Gail Michel or Gail Michael (sometimes Michaels) before she opted for Gail Michel de Guzmán.

Gail credits Jane and Sherm Harris, the then managers of the Posada Ajijic, with persuading her to branch out on her own in 1964 and open a store selling her embroidered, hand-loomed dresses, original jewelry, paintings, and select Mexican handicrafts. The Harrises even provided the fashion boutique’s first venue: a room in the Posada. Its name, El Ángel, was in honor of her oldest daughter, Angelina. (The title of Al Young‘s 1975 novel Who is Angelina?, set partly in Ajijic, is apparently purely coincidental.)

Periodic fashion shows ensured that the El Ángel boutique quickly outgrew its temporary residence in the Posada. In April 1966, it moved a short distance away to the building (occupied later by La Flor de la Laguna) at the south-west corner of the Morelos/Independencia intersection. The boutique’s opening was attended by more than 250 people, an impressive turn-out given the size of Ajijic at that time. The store remained in that property for more than a decade before returning to its roots in the Posada Ajijic shortly before Gail returned north.

Veteran journalist Jack McDonald opened his informative and enthusiastic profile of Gail Michel in 1968 for the Guadalajara Reporter by describing her as “One of most creative, versatile gals in all Ajijic.”

And dresses. As an outlet for her creative energies, which include her own paintings on rice paper with ink, she employs a dozen seamstresses and a staff of wood and stone carvers who cut anything from small figurines to water fountains.”

The El Ángel boutique, described later by long-time Ajijic resident Kate Karns as “the most beautiful of Ajijic’s three shops” at the time, was featured in Vogue Paris and recommended in the August 1970 issue of Harper’s Bazaar.

By December 1969, Gail, now described as “a well known expert on Mexican arts and crafts” was also managing the gift shop at the Villa Montecarlo in Chapala.

In 1974, Gail was one of only four “members of the Ajijic business community” invited to participate in a program for Guadalajara TV Channel 6 to celebrate the first anniversary of the state’s “Conozco Jalisco” (“Know Jalisco”) campaign. (The other invitees were Jan and Manuel Ursúa of the Tejabán Restaurant and Boutique, and Antonio Cardenas, the owner of La Canoa boutique.)

Everyone I’ve interviewed who knew Gail Michel de Guzmán in Ajijic has expressed their fond memories of her. Many have also shared favorite anecdotes. Eunice Huf, for example, recalled Gail as a young blonde girl with freckles who designed both jewelry and dresses with simple, elegant, lines. She chuckled as she told me how Gail had once dressed her up in a crocheted top that was so sexy it made even their fellow artist Abby Rubenstein jealous!

The late Tom Faloon openly expressed his admiration for Gail’s art, and then laughed as he remembered how on one occasion Gail, on learning that Marcos had a new girlfriend, had once deliberately driven her car into the girlfriend’s vehicle. The next day, a contrite Gail went to the police station to admit her wrong-doing but found, to her pleasant surprise, that the police had no interest whatsoever in this or any other “crime of passion”!

As an artist, Gail participated in numerous shows during her time in Ajijic. One of the earliest was the Posada Ajijic’s Easter exhibit in April 1966. Other artists on that occasion included Jack Rutherford; Carl Kerr; Sid Adler; Allyn Hunt; Franz Duyz; Margarite Tibo; Elva Dodge (wife of author David Dodge); Mr and Mrs Moriaty and Marigold Wandell.

In January 1968 Gail’s paintings were shown in an exhibition at El Palomar in Tlaquepaque, alongside works by Hector Navarro, Gustavo Aranguren, Coffeen Suhl, John K. Peterson, Don Shaw, Peter Huf, Rodolfo Lozano and Eunice Hunt. The following month, a group of Ajijic artists (Gail Michel and the members of “Grupo 68” – John K. Peterson, Eunice Hunt, Peter Huf, and Don Shaw) were reported to be exhibiting weekly, every Friday, at El Palomar, and also most Sunday afternoons at the Camino Real hotel in Guadalajara. 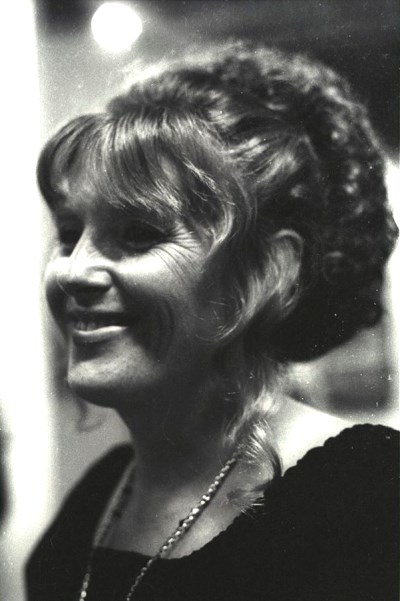 An appliqued wall-hanging by Gail was shown in a collective fine crafts show at Galeria Ajijic (Marcos Castellanos #15) in May 1968. Among the other artists at that show were Mary Rose, Hudson Rose, Peter Huf and Eunice Hunt (with their miniature toy-like landscapes complete with tiny figures and accompanying easels), Ben Crabbe, Joe Rowe, Beverly Hunt and Joe Vine.

These three artists joined with Tom Faloon,  Hubert Harmon, John K. Peterson, Adolfo Riestra, Sidney Schwartzman, to form a new group known as Clique Ajijic, a group of eight artists who formed a loosely-organized collective for three or four years in the mid-1970s. The group’s exhibitions included two in Ajijic – at the Galería del Lago (Colón #6, Ajijic) in August and at the Hotel Camino Real in September – as well as shows at Galeria OM in Guadalajara (October 1975); Club Santiago in Manzanillo (October 1975), the Akari Gallery in Cuernavaca (February 1976) and at the American Society of Jalisco in Guadalajara (also February 1976).

Imitation is the sincerest form of flattery, and copies of Gail Michel de Guzmán’s original dress designs can still be found in some Ajijic stores.

Sincere thanks to Gail Michel de Guzmán for her help compiling this profile of her time in Ajijic, and to Judy Eager, the late Tom Faloon, Katie Goodridge Ingram, Peter and Eunice Huf, and Enrique Velasquez for sharing with me their personal memories from that time.