Florentino Padilla, who lived from about 1943 to 2010, regularly featured in the pages of the Guadalajara Reporter in the mid-1960s because he was “largely responsible for the bright, charming paintings” that were being produced by youngsters in weekly art classes at the Lake Chapala Society’s “Biblioteca”. 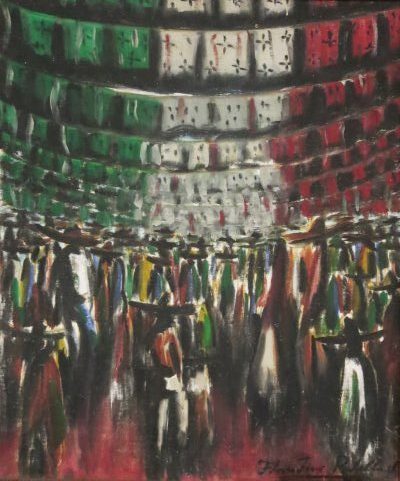 Padilla, described as a personable young man, was then in his early 20s and an accomplished painter in his own right. He had begun painting at the age of 15 and his talent had been recognized by Neill James, the American writer who had resided in Ajijic from the mid-1940s. James helped Padilla get a scholarship to study art in San Miguel de Allende.

James wrote to Stirling Dickinson (the Director of Instituto Allende in San Miguel) in December 1959 to ask him if his offer of a second scholarship was still open. (Javier Zaragoza was already studying at the Instituto). Since showing Dickinson examples of Florentino Padilla’ work, she had arranged for him to stay with artist Francisco García and his family in San Miguel. (The Francisco Garcías were friends of Ajijic resident Esther Merrill.)

In her letter to Dickinson, James explained that Padilla is “studious, eager to learn and gentlemanly. He has done some beautiful murals, 3 meters x 4 meters, mas o menos.” Unless she heard to the contrary, Padilla would be in San Miguel to start classes at the Instituto the first week in January. Padilla studied at the Instituto Allende from 1960 to 1962. According to a short piece in El Informador, in 1964, when Padilla arranged an exhibit of works by 16 young artists of Ajijic at the Instituto Cultural Mexicano Norteamericano de Jalisco in Guadalajara, Padilla’s teachers in San Miguel had included ‘Gambo’ and ‘Bowman.’

Ajijic resident Hector Hinojosa recalls that Padilla lived in Ajijic until the late 1970s, but then lived in California, where he painted a mural in San Francisco.

In 1965 two visitors from California (Tom and Barbara Lipman) saw Padilla’s paintings in Ajijic and bought three of them on the spot.

Padilla’s niece, Lucia Padilla Gutierrez, is also a gifted artist who benefited from art classes given at the Lake Chapala Society; her son is now following in her footsteps.

We would love to learn more about this artist’s life and work. If you can add to this all-too-brief biography, then please get in touch!