Major was born in Atlanta, Georgia, in 1936 and grew up in Chicago. In the early 1950s, Major studied drawing and painting under painter Gus Nall (1919–1995) and attended the Art Institute of Chicago, where his teachers included Addis Osborne (1914–2011). Coincidentally, the enigmatic African American artist Ernest Alexander, who lived for several years in Ajijic in the early 1950s, had also studied in Chicago and exhibited at the Art Institute of Chicago shortly before Major took classes there.

In 1968, Major left New York and visited Mexico for several months in the company of his then girlfriend Sheila Silverstone. During the trip, Major was revising his first novel, All Night Visitors, published in 1969. Major’s first collection of poems, Swallow the Lake, was published the following year and won a National Council on the Arts Award. 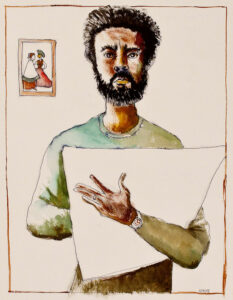 In Mexico, the couple spent some time in Puerto Vallarta but also visited Lake Chapala, which became the basis for at least two poems published in Symptoms & madness: poems (1971).

The first poem is entitled “IN CHAPALA, JAL” and describes them sitting, reading, in “a red mud / colored 30 pesos per day hotel room”.

The second poem, entitled “EIGHTEEN-DOLLAR TAXI TRIP TO TIZAPAN AND BACK TO CHAPALA” was later included in the collection Configurations: New & Selected Poems, 1958-1998, published in 1999 and a finalist for a 1999 National Book Award. This poem tells how their taxi driver (“with a good life / who has four children, / a pregnant wife, / and who lives in Guadalajara”) drives them, “radio going / cha-cha-cha” through a storm around the south side of the lake.

Major’s poetry and short stories have been published in dozens of literary magazines and anthologies. Major has won dozens of major awards and served as a judge for many important literary contests including the the PEN/Faulkner Award (1997-1998), the National Endowment for the Arts Awards (1987) and the National Book Awards (1991). Major helped edit several literary periodicals, including Caw! and The Journal of Black Poetry. He was a regular columnist for American Poetry Review and the first editor of American Book Review.

In 2015, Major was awarded the “Lifetime Achievement Award in the Fine Arts,” by The Congressional Black Caucus Foundation.

The covers of several of Major’s books, including Myself Painting, Waiting for Sweet Betty, and Down and Up feature his own paintings.