Leonet (“Leo”) Matiz Espinoza was a Colombian photographer and caricaturist who lived and worked in Mexico in the 1940s. In 2011, eight gelatin silver prints in a series called “Fishing on Lake Chapala” came up at auction with an estimate of 8000 Euros; one of these eight images appears below.

Matiz was born on 1 April 1917 in Aracataca, Colombia, coincidentally the birthplace of novelist Gabriel García Marquez. He left his native Colombia for Mexico City in 1939, hoping that his artistic talents would enable him to find success there. He traveled overland from Panama via Costa Rica, Nicaragua, El Salvador and Guatemala.

It was in Central America that Matiz met and immediately proposed to Celia Nichols, the daughter of a British diplomat; he was 23, she was 40. They were only able to marry after Matiz had seen off a rival in a dawn shooting duel. According to La metáfora del ojo, Matiz claims he responded to Celia’s concern about the age difference by pointing out that, “I don’t see your age. I’m as interested in you, as you are in me.”

Matiz, whose long black hair, and gangster-like mustache complemented his mischievous sense of humor and absurdly colored jackets, would eventually have seven marriages in all.

Leo and Celia arrived in Mexico in 1941 as newly-weds and Leo quickly established himself as a caricaturist and photographer, claiming to have chosen the latter more for its economic rewards than because it was his first love as an artist. 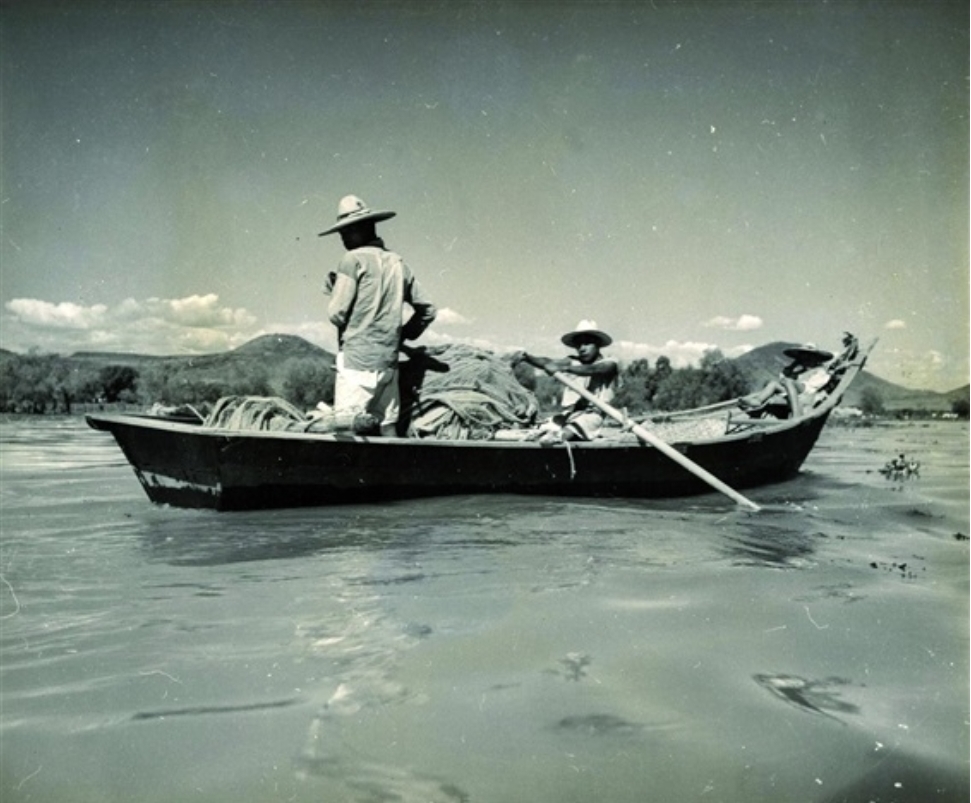 Matiz held several exhibitions of his work in Mexico City in the early 1940s. The first, entitled “Fotos y Dibujos” (“Photographs and drawings”), opened at the Museo de Bellas Artes (Opera House Museum) in Mexico City in 1941 with a speech by the Chilean poet-diplomat Pablo Neruda. 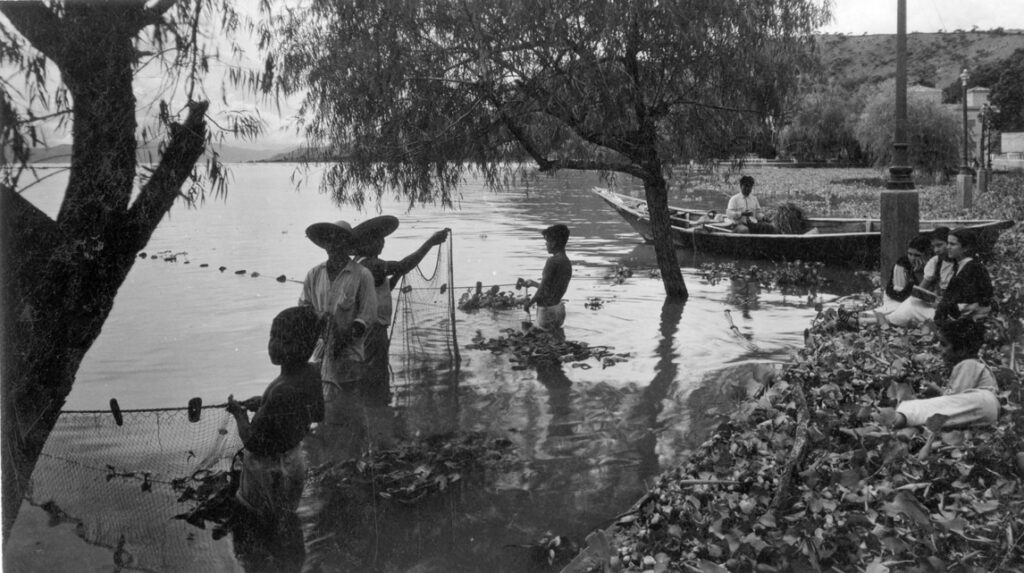 While the precise dates of his visit, or visits, to Lake Chapala are unknown, Matiz sent a special photo-report on the lake to the magazine Así. The report, entitled “Chapala, mar jaliciense” (“Chapala, Jalisco’s Sea), was based on several outstanding examples of Matiz’s photos, and was published in Así on Valentine’s Day in 1942 (Así # 66, 14 February 1942: 31-35). One photo in that article shows the main church and beach in Chapala as viewed from the lake, but most depict fishermen going about their work. Several views of fishermen tending their nets are taken close to the lake shore and show masses of lirio (water hyacinth), though this is not commented on in the accompanying text which focuses, instead, on the superior eating quality of the lake’s fish, especially the highly prized whitefish.

Matiz was not only a photographer. In Mexico, he also honed his skills as a caricaturist, influenced by the work of Guadalupe Posada and others, transferring these same skills of keen observation and astute choice of angles to his photography. As a result, his work regularly featured in the pages of magazines such as Así, Life, Reader’s Digest, Harpers Magazine, Look and Norte. He was also active in the world of cinematography.

As Matiz’s fame grew, so did the invitations and commission he received. In 1944, he held a solo show of “Watercolors and Paintings” at the Advertising Club of New York in New York City, and, in 1947, his work was included in a group show at the Museum of Modern Art (MoMA) in New York. Solo shows of his work have since been held in numerous countries, from Switzerland, France, Italy, and Austria to Colombia, Venezuela, Bolivia and Australia.

Leo Matiz was completely enamored with the extraordinary diversity of Mexican geography:

“The magazine Así launched me as a graphic reporter in Mexico. I began to look for themes and discovered the old and deep Mexico, eternal and fleeting. There before my eyes was the baroque architecture, the paintings, the murals, the Maria islands and the poignant histories of its presidents, the starving coyotes in the desert, the day of the dead, the sacred temples and the purity of Yucatan, the red ants in the desert, the women of Pancho Villa, the dead trees, the divas in the movies, the cemeteries, the colour of the folk crafts, the peasants and the remote hope of their redemption.” [quoted in Leo Matiz: The Eyes of Time]

The indefatigable Matiz traveled widely across the country. In the mid-1940s he accompanied Gerardo Murillo (Dr. Atl) to watch the birth of Paricutín, the volcano that erupted in a farmer’s field in Michoacán. On another occasion, he visited the infamous Islas Maria penitentiary, off the coast of Nayarit, documenting the lives of its prisoners.

Throughout the 1940s, Matiz was in great demand in Mexico City. He  considered José Clemente Orozco to be his mentor and father figure. At one time or another, all the major celebrities of the day, from stars of stage and screen such as Mario Moreno (“Cantinflas”), Dolores del Río, Agustin Lara and María Félix (with whom he had an amorous relationship) to artists such as Orozco, Diego Rivera, Frida Kahlo and David Alfaro Siqueiros, looked into the lens of Matiz’s Rolleiflex. Matiz also photographed Janice Logan, Luis Buñuel, Marc Chagall, Louis Armstrong, Álvaro Mutis, Pablo Neruda and Walt Disney. His portraits show sensitivity, intimacy, the product of what one admirer called a “profound psychological penetration”.

He collaborated with Siqueiros to document his murals, though the two men later had a very public disagreement. When Siqueiros mounted an exhibition of paintings derived from his photographs in 1947, Matiz claimed some of the works were plagiarized. Siqueiros retaliated by calling Matiz an enemy of muralism and a North American imperialist. Things really escalated out of control when Siqueiros arranged for Matiz’s studio to be set on fire, forcing the photographer, concerned for his safety, to flee with his family to Venezuela. It would be almost fifty years before he returned to Mexico.

Matiz lived the remainder of his life in various countries, dividing most of his time between Colombia and Venezuela. Besides his art, he also started newspapers and opened art galleries. In 1951, a gallery he owned in Bogota staged the first exhibition of the Colombian painter Fernando Botero.

Matiz regularly claimed to miss Mexico, but did not return there until 1995, and was then profoundly shocked when he learned that the building that had housed his studio had been totally destroyed in the 1985 Mexico City earthquake. He remained active, despite failing eyesight, traveling through Mexico in 1997 taking pictures of rural workers for “Los hijos del campo”, the last book he illustrated.

Matiz’s photographic work is considered to be some of the finest of the twentieth century, demonstrating remarkable versatility, composition and technical ability. In 1948, he was named one of the world’s 10 best photographers. Examples of his work can be found in many major museums, including the Museum Of Modern Art (MoMA) in New York and the Tate Gallery in London, U.K.

Leo Matiz died in Bogota, Colombia, on 24 October 1998. His images and artistic legacy are conserved and promoted by the Leo Matiz Foundation.