Alfredo Santos spent some time painting, and dealing in art, in Ajijic (and elsewhere in Mexico) in the early 1960s. However, before we look at that period of his life in more detail, it is worth considering his extraordinary backstory.

Alfredo Santos was born in San Diego in 1927, the third of five children. He spent his early childhood in Tijuana, where his father was a union activist. The family moved back to the U.S. when Santos was 8. His early education came to an abrupt halt when he was expelled from high school for hitting a school official.

An infection that left him with fragile bones prevented him from enlisting in the U.S. military. Santos then had a series of scrapes with the law, including a prison term for helping smuggle illegal immigrants from Mexico cross the border. (Santos later said, “To me, I didn’t see anything immoral. I was sort of a Robin Hood, I thought.”)

He turned from people-smuggling to drug dealing, but was arrested again, and, in 1951, at age 24, began a four-year stint in San Quentin prison in California that would transform his life. Santos acknowledges that “San Quentin is where I became an artist.” (see this link)

His bone infection meant that he spent his entire time in prison in the hospital cells, where he read voraciously and even had his own small art studio. He drew caricatures of his fellow inmates in exchange for cigarettes.

Santos’ “Big Break” came when the prison doctor encouraged him in 1953 to enter a contest to paint some murals on the dining room walls. His quickly-sketched proposal (for a single wall), showing the transformation of California between the 1850s and the start of the second world war, was a clear winner, and he was given all three double-sided walls to work with. Because the dining room was in constant use during the day, painting was done almost entirely at night. The six murals – each about 12 feet high and 95 feet long – took two years to complete, with Santos absolutely determined to finish them before his parole date.

The murals, done in browns and blacks, show a kaleidoscope of Californian history, ranging from a cable car (that follows viewers across the room) to a wartime airplane and whimsical images of a sombrero-clad immigrant crossing the border and a soldier looking through a telescope at a woman undressing in a high-rise window further along the wall. The 1906 San Francisco earthquake is depicted, as is the golden age of Hollywood.

When he left San Quentin in 1955 Santos took with him some 50 paintings completed during his incarceration. He worked as a caricaturist at Disneyland for two years, saving enough money to return to San Diego in 1957 and open his own art studio and gallery. By 1960 the gallery “had become a mainstay of that city’s nascent arts scene.” (Russell) However, in 1961 the law caught up with him once again. He was arrested, and admitted to, one count of marijuana possession (a felony at the time). The night before he was due to appear in court for sentencing, Santos decided to go on the run. He married his 19-year-old girlfriend and they eloped to Mexico.

They appear to have first lived in Guadalajara, where a press release for the opening of his gallery in the city in 1961 proclaimed that the artist had come to Mexico to “have more freedom to express himself artistically.” At least one newspaper article includes a photo of him in his Guadalajara studio in 1961. In 1962, an exhibition of paintings by Tink Strother and other artists was held at the Alfredo Santos gallery in Guadalajara.

The marriage did not last long. His homesick bride returned to California after eight months, where the marriage was annulled. Santos, though, remained in Mexico and his art flourished.

Among those highly impressed by Santos’ wood sculpting and abstract paintings was Joan Woodbury, an ex-actress turned Palm Springs art critic. In one of her regular newspaper columns, she described Santos as “one of Mexico’s foremost impressionists”. She helped arrange a month-long showing of his work at a Palm Springs gallery. 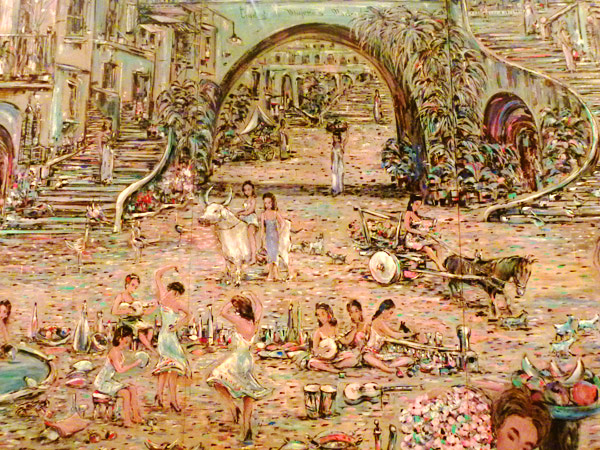 During his time in Guadalajara, Santos, who liked to listen to jazz as he painted, became friends with the owner of the Café Madrid, a downtown restaurant on Av. Juárez that became, and remains, a Guadalajara institution, much loved by the literary and artistic crowd. At the owner’s insistence, one night Santos painted a picturesque mural, known as “Ciudad de mujeres” (“City of women”) in the restaurant. It depicts imagined daily life in the Spanish capital Madrid, full of beautiful women. Santos is said to have completed this mural in a single, liquor-fueled, fun-filled night. According to one version, the women in the mural were originally portrayed in the nude, but the wife of the café’s owner wife insisted that clothes be added. The mural is still there, and both restaurant and mural are well worth visiting.

After Guadalajara, it seems that Santos moved to Ajijic, though the precise circumstances and timing remain unclear. By 1963/64, Santos, accompanied by a young lady, had taken up residence in Ajijic’s Hotel Anita, then the social center of the village. Katharine Couto, whose parents owned the hotel from 1963/64, recalls that, “He was always quite charming and nice, but I was only 13 years old. Now I read he was “on the lam” which would explain why he and his beautiful girlfriend always stayed secluded in their suite.” She also recalls that Santos paid her parents, in part, with two paintings, one of which she later donated to the Latino Center in Omaha, Nebraska.

Another Ajijic resident of the time, Randi Atchison, recalls how, in the early 1960s, their family “spent time at his gallery in Guadalajara, watched him paint and enjoyed his colorful character.” Atchison has several paintings by Santos, on one of which “Alfredo wrote a personal note to my mother on the back… in her lipstick, that remains legible 44 years later.” Atchison notes that, “Alfredo also came to our house in Ajijic one day and painted a large Mariachi band mural on the living room wall.” it is unclear if this mural still exists.

In 1964, Santos decided to try his luck in Mexico City. He opened a studio-gallery on Calle Niza, in the city’s trendy Zona Rosa district. The following year, he married Mary Ann Summers; the couple (who divorced in 1977) had two sons, the elder of whom (Chris Santos) is now a professional artist in New York. Summers has described Santos’ studio-gallery at this time: “Alfredo had this fantastic gallery above a Chinese restaurant with four huge rooms downstairs and a big sunny studio loft above it… Between the two levels, sort of hidden away, was his bedroom, the walls of which were completely covered with photographs and paintings of nudes.”

This 5-minute Youtube video, Broken Mold: the Life and Art of Alfredo Santos, shows him at work:

In 1966, Santos moved his gallery to Acapulco for a year, before deciding to return to the U.S. In 1967, Santos settled into a rented apartment in New York, with his wife and infant son. He undertook commissions for various New York clients who had discovered his work in Mexico. One of them convinced Santos to relocate to the village of Fleischmanns, in the Catskills and close to Woodstock. Santos’ studio-gallery in Fleischmanns became “a magnet for every hip person for miles around,” according to one of his longtime friends and patrons.

In the 1980s, following his divorce from Summers and a heart attack, Santos moved back to San Diego. In 2011, the Zoom Gallery in Fleischmanns, held a retrospective of the works of Alfredo Santos, “The People’s Artist”.

In 2003, arrangements were finally made for Alfredo Santos to revisit San Quentin, this time as a distinguished guest rather than as an inmate, and see his murals again for the first time in almost fifty years. Only then, did the full extraordinary story of these amazing prison murals make the mainstream press.

6 Responses to “Inside job: Alfredo Santos, muralist and painter”