Artist John Maybra Kilpatrick, who painted a WPA mural in Chicago in 1947, retired to Ajijic with his wife Lucy in 1964 and resided there until his death on 27 August 1972.

John Maybra Kilpatrick was born in Illinois (in either Vandalia Fayette County or Centralia Marione County) on 2 October 1902. He apparently studied at the School of the Chicago Art Institute under portraitist Hubert Ropp, the school’s then dean. Ropp is recorded as visiting friends and former students – the Kilpatricks and Al and Janet Zimmerman – in Ajijic in 1971.

John Maybra Kilpatrick became engaged to be married with Lucy Margaret Legge in December 1926. The couple had two children, a daughter born in 1931 and a son born two years later.

In 1947, Kilpatrick took part in the WPA murals project. Together with Hungarian artist Miklos Gaspar, Kilpatrick painted a mural entitled “The Children’s Hour” in Oak Terrace School, 240 Prairie Avenue, Highwood, Chicago. The mural is listed as still extant in 2001 when Mary Lackritz Gray’s book A Guide to Chicago’s Murals was published. 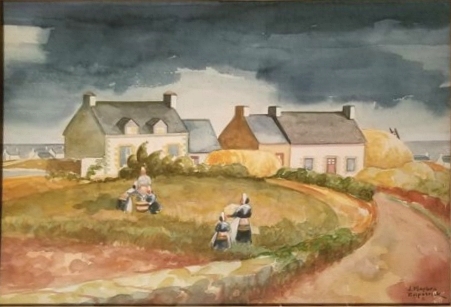 Kilpatrick worked as a commercial artist for the H. D. Catty Corporation of Huntly, Illinois. In 1952, the corporation applied for copyright for colored Christmas wrapping paper designed by Kilpatrick, entitled “Merry Christmas (Snow scene with 3 figures in front of houses)”.

After Kilpatrick’s passing in Ajijic in 1972, Lucy Kilpatrick is regularly mentioned in local newspapers as helping with ceramics classes in the village.

My thanks to Holly Johnson for sharing an image of Kilpatrick’s painting “The Gleaners.”