We know disappointingly little about the life and work of artist Emanuel(e) Mario Aluta. Aluta moved to Ajijic with his second wife Daphne Greer Aluta (born 1919) in the late 1960s. It is unclear whether or not Mario remained in Ajijic after 1974 when Daphne married Colin MacDougall in a small ceremony at the home of Sherm and Adele Harris, the then managers of the Posada Ajijic. 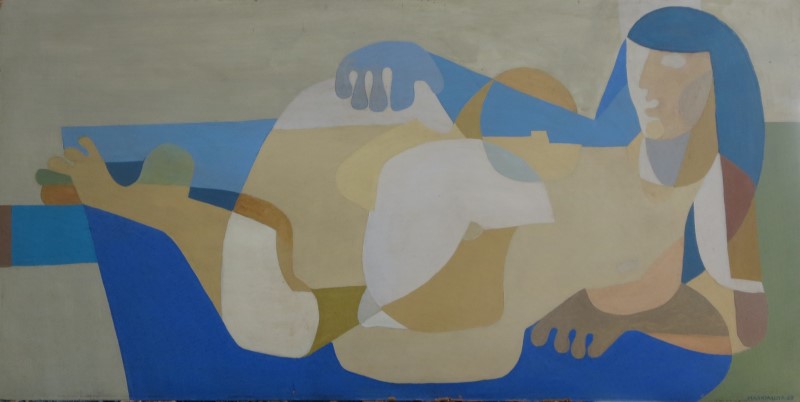 Mario Aluta’s artwork, described in a review by Hannah Tompkins as a “series of male figures … vigorously painted with strong emphasis on planal design”, was included in a 1970 exhibition at the Casa de la Cultura Jalisciense in Guadalajara. The show opened on 6 June 1970 and featured a long list of Lakeside and Guadalajara artists. Among the other Lakeside artists in the show were Daphne Aluta, Peter Huf and his wife Eunice Hunt, John Frost, Bruce Sherratt and Lesley Jervis Maddock (aka Lesley Sherratt).

Emanuel(e) Mario Aluta was born in Constantinople, Turkey, on 3 January 1904, but (also?) had Italian citizenship. He died in California on 22 September 1985.

I know nothing about Aluta’s early life, education or art training, but believe his first wife was Charlotte Maria Richter, who was born in Vienna, Austria, in about 1911. The couple seem to have first entered the U.S. in about 1936. In November 1937, they are recorded as crossing the border from Mexico back into the U.S.. The following year (1938) they applied to become naturalized U.S. citizens. Their application was finally approved in August 1943.

At the time of the 1940 U.S. Census, the couple was living in Los Angeles. According to the census entry, they had been living in Nice, France, five years earlier in 1935.