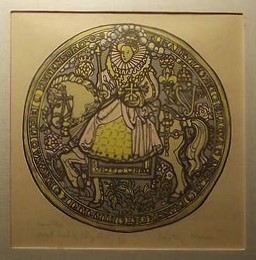 Dorothy Goldner. From the Great Seal of Elizabeth.

Dorothy (“Dot”) Thompson Goldner was born in Seattle, Washington, on 10 March 1906. After graduating from Modesto Senior High School in California, she studied at the California College of Arts and Crafts in Berkeley (now California College of the Arts) where she met fellow artist Orville Goldner. The couple married in October 1925 and moved to Hollywood shortly afterwards. In the late-1920s, they were members of a traveling Shakespeare Theater Group and a peripatetic marionette show, before Orville became actively involved in the film industry in the 1930s. (We will profile Orville’s artistic career in a later post). 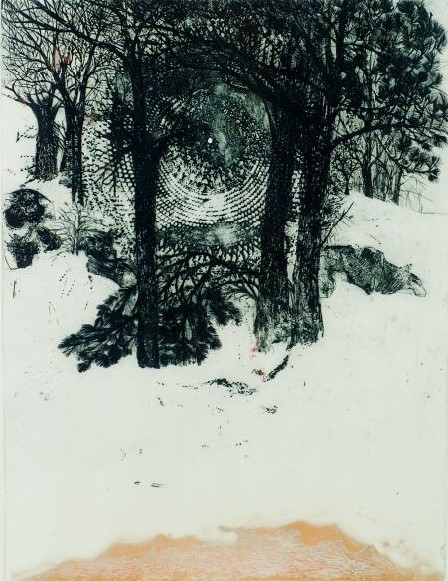 After the second world war, the Goldners went to Europe. The family lived in France for several years before returning to San Francisco. They moved to Chico in 1966 when Orville was appointed as director of Audiovisual Education and Mass Communications at Chico State College.

Dorothy Goldner partnered her husband to form the film production company Visual Americana (1968 to 1971) which made various documentary film strips as well as the award-winning ethnographic film Three Stone Blades, about the Inupiat (Eskimo) people of Point Hope, Alaska, the farthest northwest village in North America, and an area now abandoned because of flooding by melting ice.

While the details of the Goldners’ time in Ajijic are unclear, Dorothy was clearly an accomplished artist. She was a member of the National Organization of Women Artists and had held solo shows at the Berkeley League of Fine Arts (1927), the San Francisco Art Association (1938), the Springville Museum in Utah (1974) and Chico State University (1982). She also illustrated Ripples along Chico Creek, an account of early Chico published in 1992 by the Butte County Branch of the National League of American Pen Women.