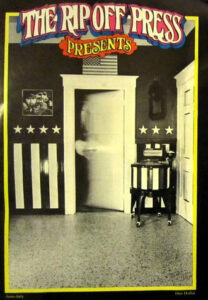 Cover of The Rip Off Review of Western Culture, Vol 1 #1 (June/July 1972). Photo by Michael Heinichen

Heinichen lived in Mexico for some time – certainly more than he originally intended. His link to Ajijic is via Beverly Johnson who was already living there. In 1969, Johnson returned to California to renew her tourist papers, and met and fell in love with Heinichen. Early in 1970, they returned to Ajijic where Heinichen taught Johnson photography and darkroom techniques.

By summer 1972, Heinichen had amassed a significant body of work from his travels around Mexico and had also separated from Johnson and moved to Jocotepec to live with his new girlfriend, Laura Katzman.

In September 1972, Allyn Hunt, writing in the Guadalajara Reporter, reviewed a month-long, two-man show at El Tejabán in Ajijic of work by Heinichen and young Mexican artist Adolfo Riestra. Hunt clearly liked the “sharp, many-toned photographs of Michael Heinichen featuring Mexican beach- and mountain-scapes.” Heinichen had taken his camera all over Mexico, “seizing those images one always hopes for but seldom gets…. The delicate range of greys in these pictures is proof of Heinichen’s discerning eye and technical nimbleness.” (Guadalajara Reporter, 23 September 1972)

The following year, it seems that Heinichen and Katzman visited Columbia. On their return to Mexico City, they were arrested at Mexico City international airport and charged with possession of a kilo of cocaine between them. They were each sentenced to seven and a half years in jail.

Heinichen was one of 68 American and 7 Canadian prisoners at the American wing of Lecumberri men’s prison who held a 13-day hunger strike in 1974, which drew press attention. Described at the time as aged 30 and “a photographer from Kingsville, Texas”, Heinichen argued in the press that the couple had been coerced into making statements and had not been allowed to contact the U.S. embassy. He said that the couple were planning to get married, but that judicial authorities kept stalling the process. [The Dispatch, Lexington, N.C. – Aug 7, 1974]