Photographer and illustrator Haig Witwer Shekerjian was born 3 November 1922 in Chicago, Illinois, and finally laid his camera to rest at the age of 79 on 21 August 2002 in Schenectady, New York. He and his wife, Regina, were regular visitors to Ajijic from 1950 on, and spent several months each year in the village during the 1970s and 1980s. 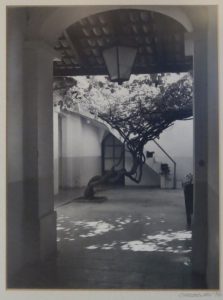 Haig attended Oak Park and River Forest Township High School in Oak Park, Illinois. His interest in photography started at an early age and, as a teenager, he was an avid member of the school’s Camera Club. After high school, he studied at the Eastman School of Photography in Rochester, New York, and at the University of New Mexico in Albuquerque. A 1943 yearbook entry shows that he was not only handsome, but also an accomplished actor, and member of the University Dramatic Club.

On leaving university, Haig joined the U.S. Navy in November 1943. In early 1944, before leaving to serve for the remainder of the second world war in the Pacific, Haig married Regina deCormier, his lifelong love.

Working as a Navy photographer, Haig Shekerjian was in the first landing party at the Battle of Iwo Jima (1945), saw action elsewhere, and photographed the Japanese surrender. He was the recipient of several military decorations. Haig’s return to the U.S. was noted in a poignant local newspaper entry in December 1945 which stated that Haig, “was one of 11,382 High Point Navy veterans returning from Guam on the U.S.S. Cowpens.”

Regina DeCormier Shekerjian (1923-2000) was a well-known author, translator and illustrator of children’s books. The couple, and their two sons (Tor and Jean-René), lived for many years in New Paltz, New York, where Haig was Art Director of the Media Services Center at the State University College for over 30 years, until the age of 75.

Taking a sabbatical break over the winter of 1950-51, Haig and Regina spent several months living in Ajijic. (Regina later published an article about why Ajijic was an excellent choice for anyone seeking an inexpensive art-related summer). They returned many times in the late 1970s, 1980s and early 1990s, often staying a few months. 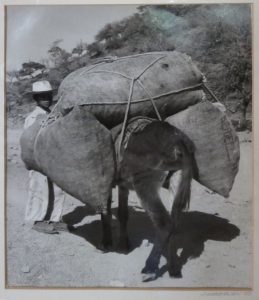 Haig was apparently never very interested in the commercial aspects of photography, though his work appeared in many books, publications and literacy works, and his work was rarely exhibited or sold, though he gave away a few photographs as treasured gifts. His peers recognized the quality of his photographs and in 1977, one of his photos was included in the inaugural exhibition of the Catskill Center for Photography in Woodstock, New York.

Together with Regina, Haig Shekerjian illustrated several books, most of them written by Nancy Willard and aimed at young readers. They included The Adventures of Tom Thumb (1950); Life in the Middle Ages (1966); The boy, the rat, and the butterfly (1971); King Midas and the Golden Touch (1973); Play it in Spanish : Spanish games and folk songs for children (1973); The merry history of a Christmas pie : with a delicious description of a Christmas soup (1974); All on a May morning (1975); How Many Donkeys? A Turkish Folk Tale (1971); and The well-mannered balloon (1976).

Michael Eager, owner of La Nueva Posada hotel in Ajijic, remembers the couple well: “Haig had short gray hair with a goatee and was rarely without his Greek sailor’s cap. Both he and Regina dressed casually, Haig with jeans, checkered shirt, and somewhat “beatnik” looking. He was never without his camera.” Both Haig and Regina loved the local people, music and traditions.

The dining room of La Nueva Posada in Ajijic has a permanent exhibition of Haig’s evocative photographs of what the Lake Chapala area was like years ago—clear evidence, if any were needed, of the couple’s immense enthusiasm for the area and its people.