Eunice Eileen (Hunt) Huf, born 27 February 1933 in Alberta, Canada, can trace her family’s roots back to Switzerland and Germany. Her mother migrated to Canada from Bessarabia in Eastern Europe. Her father was born in Alberta.

Eunice studied painting for two years in Edmonton, specializing in portraiture. She married young and worked for a couple of years before continuing her art studies at the Vancouver Art School (now the Emily Carr University of Art and Design) where she also honed her skills in photography. She then worked as a freelance artist in Canada and Arizona before deciding to visit Mexico to regroup following the break-down of her first marriage which ended in divorce. 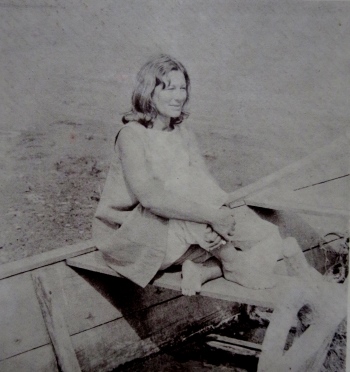 Her visit to Mexico was life-changing. After relaxing and painting for a few weeks in the small tropical town of San Blas on the Pacific Coast, Eunice went to a Sunday night Lion’s Club dance where she met a tall, handsome, German artist, Peter Paul Huf. It was January 1965 and the start of a life-long romance. Forty years later, the Huf’s elder son, Paul “Pablo” Huf, retold the story of this romance in an enthralling art display in Mexico City.

After meeting at the dance, Eunice and Peter spent the next six months together, first in San Blas and then in Oaxaca and Zihuatanejo (Guerrero). It was in San Blas where they first met Jack Rutherford and his family with their vintage school bus, the start of a long friendship. Rutherford had dug the sand away from the walls of an abandoned building in order to display and sell his paintings. In February 1965, Eunice and Peter Huf exhibited together in a group art show on the walls of the then-ruined, roofless, customs house (partially restored since as a cultural center).

After visiting Zihuatanejo, Eunice returned to Vancouver in June 1965, while Peter returned to Europe. They eventually reunited in Amsterdam later that year and traveled to Spain and Morocco from where Eunice continued on to South Africa for a short visit.

By January 1967 they were back together (this time for good!) and aboard a ship bound for Mexico. After landing in Veracruz, they returned first to San Blas (where they displayed paintings in an Easter exhibition in the former customs house) and then to Ajijic, which the Rutherfords had suggested was a good place to live, paint and sell year-round. 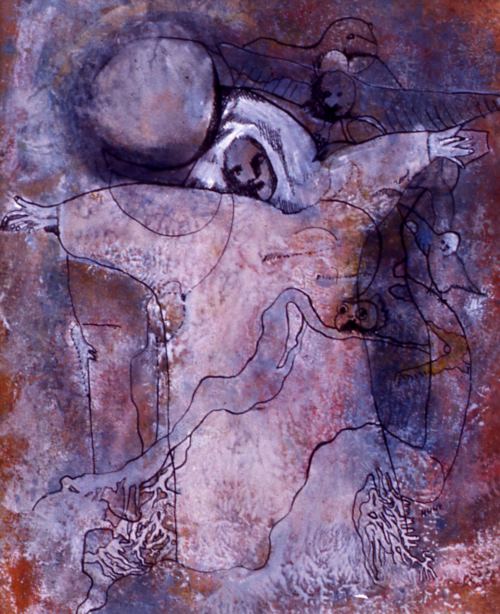 For almost all her time in Mexico (even after her marriage to Paul Huf), Eunice exhibited as Eunice Hunt, only changing her artistic name to Eunice Huf at about the time the couple left Mexico in 1972 to move first to Andalucia, Spain (1972-1974) and then to Bavaria, Germany.

Both Peter and Eunice Huf regularly exhibited their work in Guadalajara, Tlaquepaque and Ajijic. They also sold artworks from their own studios in Ajijic, located first in a building on Calle Galeana and then at their home on Calle Constitución #30 near the Posada Ajijic hotel. (This building, incidentally, was later occupied by artists Adolfo Riestra and Alan Bowers).

Eunice Huf supplemented the family income by giving private art classes to many people, including former Hollywood producer Sherman Harris, the then manager of the Posada Ajijic. Eunice kept an iguana, that she had borrowed to paint, under her bed, and had a little iguana, too.

Peter and Eunice were founder members of a small collective of artists, known as Grupo 68, that exhibited regularly at the Camino Real hotel in Guadalajara and elsewhere from 1967 to 1971. Grupo 68 initially had 5 members: Peter Huf, Eunice Huf, Jack Rutherford, John K. Peterson and (Don) Shaw (who was known only by his surname). Tom Brudenell was also listed as part of the group for some shows. Jack Rutherford dropped out of the group after a few months, but the remaining four stayed together until 1971.

The exhibitions at the Camino Real hotel began at the invitation of Ray Alvorado, a singer who was the public relations manager of the hotel. Members of Grupo 68 began to exhibit regularly, every Sunday afternoon, in the hotel grounds. Later, they also exhibited inside the hotel at its Thursday evening fiesta.

The Hufs’ first joint show in Ajijic was at Laura Bateman’s gallery, Rincón del Arte, which opened on 15 December 1967, when their firstborn son was barely two months old.

1968 was an especially busy year for the Hufs. They were involved in numerous exhibitions, beginning with one at El Palomar in Tlaquepaque which opened on 20 January. Other artists at this show included Hector Navarro, Gustavo Aranguren, Coffeen Suhl, John Peterson, Shaw, Rodolfo Lozano, and Gail Michael. The Ajijic artists in this group, together with Gail Michael, Jules and Abby Rubenstein, and Jack and Doris Rutherford, began to exhibit at El Palomar every Friday. 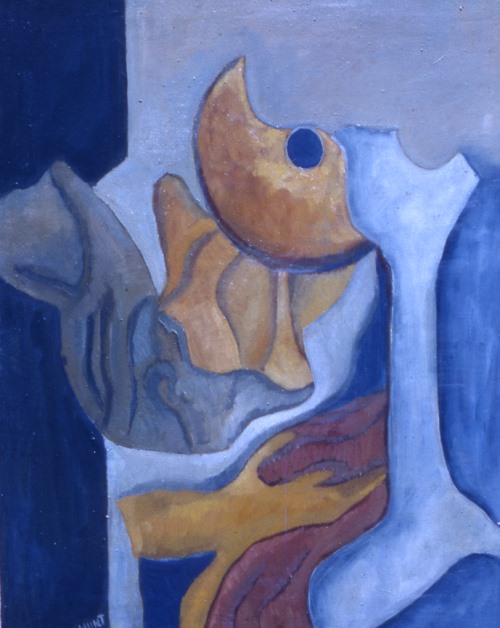 At the end of October Eunice Huf held her first solo show in Mexico, showing 40 paintings at the Galeria 8 de Julio in Guadalajara (located at * de Julio #878). The show was one of the numerous art exhibitions in the city comprising the Cultural Program of the International Arts Festival for the XIX Mexico City Olympics. (Her show preceded a solo show of works by Georg Rauch also under the patronage of Señora Holt and the Olympics.)

Somehow, in this crowded year, the Hufs also managed to fit in an exhibition at Redwood City Gallery in California.

In February 1969, Eunice and Peter Huf joined with (Don) Shaw to exhibit at the 10th floor penthouse Tekare Restaurant at Calle 16 de Sept. #157, in Guadalajara. This location has fame as the first place where jazz was played in Guadalajara. Later that year, Eunice Huf had a showing at the co-operative La Galería in Ajijic.

“Grupo 68” (Eunice and Peter Huf, Don Shaw and John K Peterson) held a showing of works at The Instituto Aragon (Hidalgo #1302) in Guadalajara in June 1969. 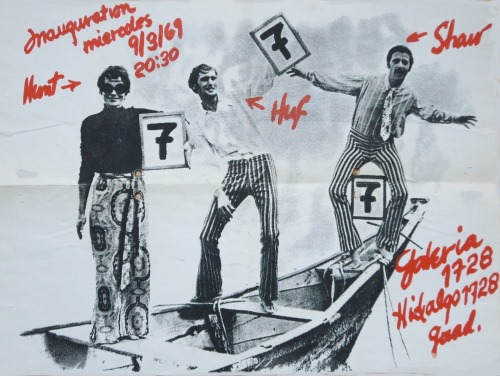 Three of these artists (the Hufs and Shaw) held another show shortly afterwards in Guadalajara at Galeria 1728 (Hidalgo #1728). That gallery was owned by Jose Maria de Servin and the show was entitled 7-7-7. It featured seven works by each artist with the promotional material featuring a pose by the three artists emulating the Olympic scoring system.

A review of the Hufs’ “Farewell Show” at El Tejaban restaurant in Ajijic in May 1972 congratulated them on their contribution to the local art scene, saying that their “steady flow of exceptional paintings has been a bright force in the art community of Jalisco for the past six years.” 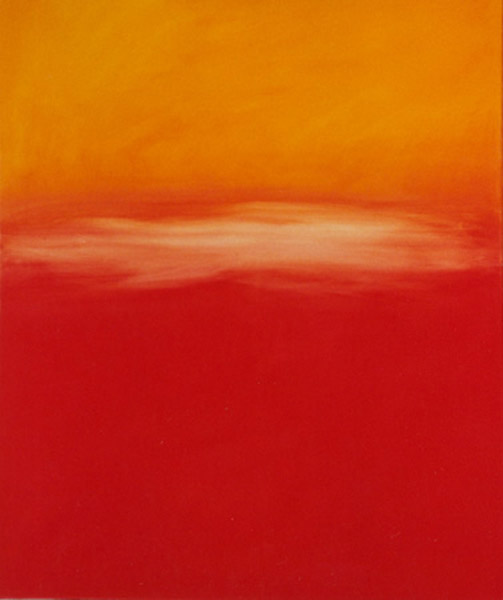 Eunice Huf. Red with clouds. 1994. Reproduced by kind permission of the artist.

Shortly before leaving Mexico, the Hufs illustrated a short 32-page booklet entitled Mexico My Home. Primitive Art and Modern Poetry With 50 easy to learn Spanish words and phrases. For all children from 8 to 80, published in Guadalajara by Boutique d’Artes Graficas in 1972. The poems in the booklet were written by Ira N. Nottonson, who was also living in Ajijic at the time. The illustrations in the book are Mexican naif in style, whereas their own art tended to be far more abstract or surrealist.

Eunice and Peter Huf left Mexico in the summer of 1972 with every intention of returning, but never did, despite making plans in early 1976 for shipping their recent works from Germany to Ajijic for a show at Jan Dunlap’s Wes Penn Gallery. According to organizers, the artists wanted to return to Ajijic permanently. It appears that this show never actually took place, owing to complications of logistics and customs regulations.

On moving to Europe, the Hufs lived near Nerja, in Andalucia, southern Spain, for a time, before settling in 1974 near Peter’s hometown of Kaufbeuren in the Allgäu region of southern Germany. The couple now have studios in the house where he was born in Kaufbeuren. Their work, known for the use of bright colors, has appeared regularly in exhibitions over the years, with both artists winning many awards along the way.

Both Eunice and Peter Huf were regulars until 2013 at Munich’s Schwabing Christmas Market, held annually since 1975.

Unlike her husband’s works which are usually painted in acrylics, Eunice Huf prefers oils and line drawings. She has produced several somewhat whimsical, exquisite, little books featuring her deceptively simple line drawings, but also does larger works, including paintings described by one reviewer as shaped by the open expanses of her native Canadian prairies.

I am very grateful to Eunice and Peter Huf for their warm hospitality during a visit to their home and studio in October 2014 which has led to a lasting friendship. Their archive of photos and press clippings from their time in Mexico proved invaluable, as did their encouragement and their memories of people and events of the time.