Peter Huf was born 2 May 1940 in Kaufbeuren in southern Germany. A self-taught artist, he began to paint in 1960, while living in Paris. He lived in Paris from 1958 to 1963, and also spent time in Malaga (Spain), Copenhagen (Denmark) and Stockholm (Sweden) before crossing the Atlantic in 1964 to live in New York.

Huf then traveled to San Blas on Mexico’s west coast, where he first met his future wife, the Canadian artist Eunice Hunt. The couple met at a Lions Club dance on a Sunday evening in January 1965, and spent the next six months together in San Blas, Oaxaca and Zihuatanejo (Guerrero). 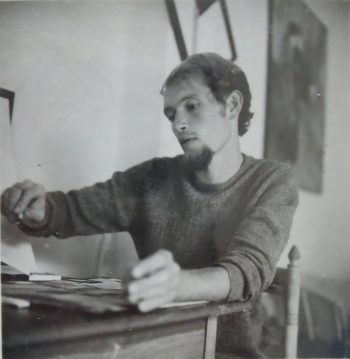 It was in San Blas where they first met Jack Rutherford and his family with their vintage school bus, the start of a long friendship. Rutherford had dug the sand away from the walls of an abandoned building in order to display and sell his paintings. In February 1965, Eunice and Peter Huf exhibited together in a group art show on the walls of the then-ruined, roofless, customs house (partially restored since as a cultural center).

After Zihuatanejo, the couple separated for several months but eventually reunited in Amsterdam later that year and visited Spain and Morocco. By January 1967 they were aboard a ship bound for Mexico. After landing in Veracruz, they returned first to San Blas (where they displayed paintings in an Easter exhibition in the former customs house) and then to Ajijic, which the Rutherfords had suggested was a good place to live, paint and sell year-round. 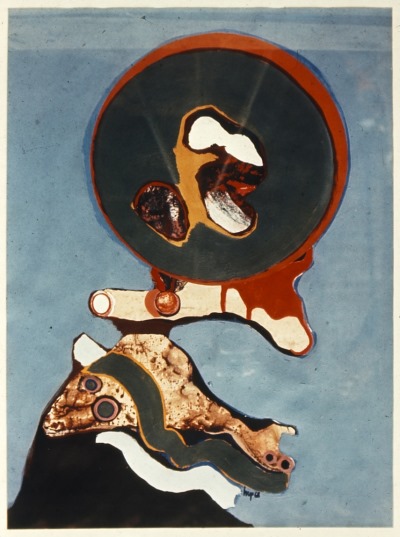 Peter Huf. From the “Mundo mono” series. 1968. Reproduced by kind permission of the artist

Both Peter and Eunice Huf regularly exhibited their work in Guadalajara, Tlaquepaque and Ajijic. They also sold artworks from their own studios in Ajijic, located first in a building on Calle Galeana and then at their home on Calle Constitución #30 near the Posada Ajijic hotel. (This building, incidentally, was later occupied by artists Adolfo Riestra and Alan Bowers).

Peter and Eunice founded a small collective of artists, known as Grupo 68, that exhibited regularly at the Camino Real hotel in Guadalajara and elsewhere from 1967 to 1971. Grupo 68 initially had 5 members: Peter Huf, Eunice Huf, Jack Rutherford, John K. Peterson and (Don) Shaw (who was known only by his surname). Tom Brudenell was also listed as part of the group for some shows. Jack Rutherford dropped out of the group after a few months, but the remaining four stayed together until 1971.

The exhibitions at the Camino Real hotel began at the invitation of Ray Alvorado, a singer who was the public relations manager of the hotel. The members of Grupo 68 began to exhibit regularly, every Sunday afternoon, in the hotel grounds. Later, they also exhibited inside the hotel at its Thursday evening fiesta. 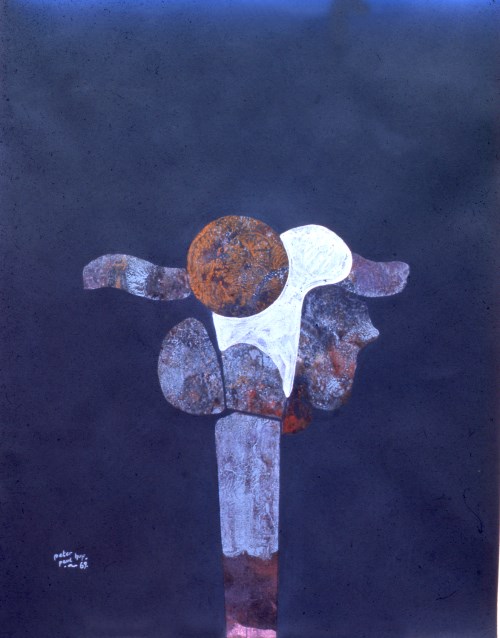 Peter Huf: Totem. 1969. Reproduced by kind permission of the artist

The Hufs’ first joint show in Ajijic was at Laura Bateman’s gallery, Rincón del Arte, which opened on 15 December 1967, when their firstborn son was barely two months old.

1968 was an especially busy year for the Hufs. They were involved in numerous exhibitions, beginning with one at El Palomar in Tlaquepaque which opened on 20 January. Other artists at this show included Hector Navarro, Gustavo Aranguren, Coffeen Suhl, John Peterson, Shaw, Rodolfo Lozano, and Gail Michael. The Ajijic artists in this group, together with Gail Michael, Jules and Abby Rubenstein, and Jack and Doris Rutherford, began to exhibit at El Palomar every Friday. 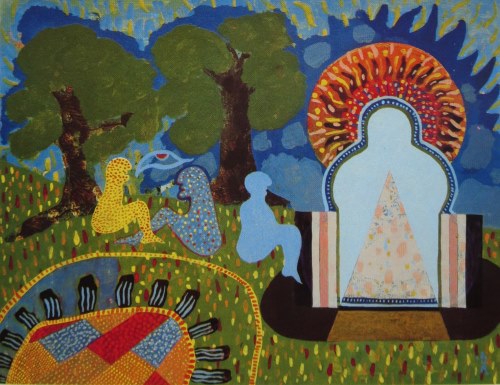 A few months before his passing last year, sculptor Don Shaw, who lived in Jocotepec for many years and was a close friend of the Hufs, shared with me the story of how he had helped ensure that Peter Huf would never try to return to Ajijic in the dark after a night’s drinking or partying in Jocotepec. Shaw had made an arrangement with the local police that if they ever found Peter Huf drunk on the street, they would lock him up, no questions asked, overnight and contact Shaw the following morning to bail him out. At US$20 a time, this might not have been the cheapest hotel in town but at least it put a safe roof over his friend’s head. Shaw’s story reminded me that Huf himself had told me about how he had once been a film extra in the making of The Great Escape, filmed near Munich, playing one of a group of prison guards who were becoming drunk. The director agreed that some genuine drinks would make their behavior more lifelike but hadn’t counted on the number of re-takes then required to get his footage. After all their hard work, the extras were disappointed to discover that this scene never survived the final cut.

In October 1968, Grupo 68 (listed as Peter Paul Huf, Eunice Hunt, John K. Peterson and Shaw) shared the Galería del Bosque (Calle de la Noche #2677) in Guadalajara with José María de Servín. This event was one of the numerous art exhibitions in the city comprising the Cultural Program of the International Arts Festival for the XIX Mexico City Olympics. 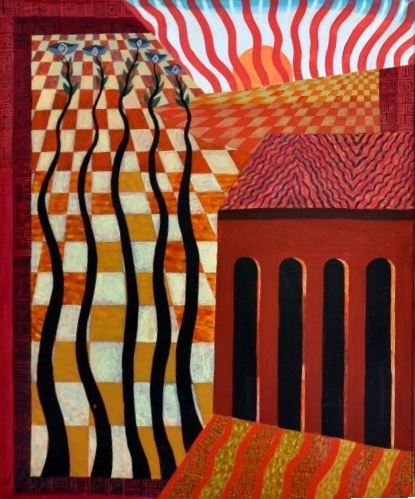 The following month, Peter Huf was helping plan a prospective show at Rincón del Arte intended to showcase work “purchased from Ajijic artists over the past 20 years”. It is unclear whether or not this show ever actually took place.

Somehow, in this crowded year, the Hufs also managed to fit in an exhibition at Redwood City Gallery in California.

In February 1969, Eunice and Peter Huf joined with (Don) Shaw to exhibit at the 10th floor penthouse Tekare Restaurant at Calle 16 de Sept. #157, in Guadalajara. This location has fame as the first place where jazz was played in Guadalajara.

At the end of the month, Peter Huf had a solo show entitled “El Mundo Mono” (Monkey World) at La Galeria in Ajijic.

“Grupo 68” (Eunice and Peter Huf, Don Shaw and John K Peterson) held a showing of works at The Instituto Aragon (Hidalgo #1302) in Guadalajara in June 1969. Three of these artists (the Hufs and Shaw) held another show shortly afterwards in Guadalajara at Galeria 1728 (Hidalgo #1728). That gallery was owned by Jose Maria de Servin and the show was entitled 7-7-7. It featured seven works by each artist with the promotional material featuring a pose by the three artists emulating the Olympic scoring system.

In May 1970, Peter Huf was afforded the honor of a one-person show, Pinturas de la Mente, at the Instituto Aleman (Goethe Institut) in Guadalajara.

The following month, both Peter and Eunice Huf were included in a group showing at the Casa de la Cultura Jalisciense in Guadalajara. Other Lakeside artists with works in this show included Daphne Aluta, Mario Aluta, John Frost, Lesley Maddox and Bruce Sherratt.

A review of the Hufs’ “Farewell Show” at El Tejaban restaurant in Ajijic in May 1972 congratulated them for their contribution to the local art scene, saying that their “steady flow of exceptional paintings has been a bright force in the art community of Jalisco for the past six years.”

Shortly before leaving Mexico, the Hufs illustrated a short 32-page booklet entitled Mexico My Home. Primitive Art and Modern Poetry With 50 easy to learn Spanish words and phrases. For all children from 8 to 80, published in Guadalajara by Boutique d’Artes Graficas in 1972. The poems in the booklet were written by Ira N. Nottonson, who was also living in Ajijic at the time. The illustrations in the book are Mexican naif in style, whereas their own art tended to be far more abstract or surrealist. 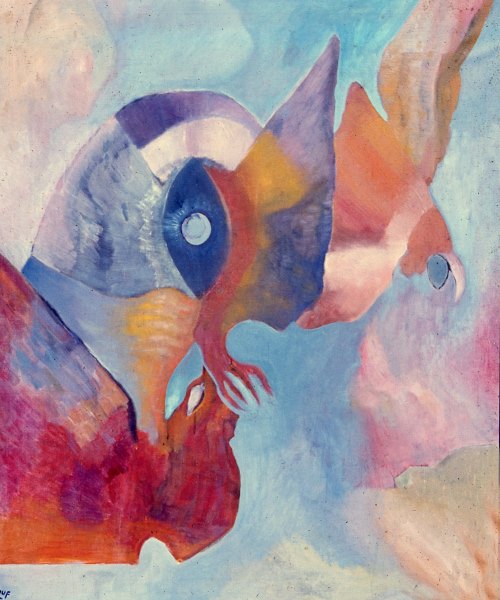 Peter Huf: Birds. 1967. Reproduced by kind permission of the artist

Eunice and Peter Huf left Mexico in the summer of 1972 with every intention of returning, but never did, despite making plans in early 1976 for shipping their recent works from Germany to Ajijic for a show at Jan Dunlap’s Wes Penn Gallery. According to organizers, the artists wanted to return to Ajijic permanently. It appears that this show never actually took place, owing to complications of logistics and customs regulations.

On moving to Europe, the Hufs lived near Nerja, in Andalucia, southern Spain, from 1972 to 1974, where they renewed their friendship with Jack Rutherford. While in Spain, Peter contracted typhoid (from a visit to Morocco) and was rushed from their isolated residence in the hills to the hospital in Torremolinos by former Ajijic resident Geoffrey Goodridge (the flamenco guitarist “Azul”) and his Dutch wife in their VW minivan.

In 1974, they returned to Peter’s hometown of Kaufbeuren in the Allgäu region of southern Germany and now have joint studios in the house where he was born. Their work, known for the use of bright colors, has appeared regularly in exhibitions over the years. Peter Huf’s art has won many awards along the way, including the colleagues’ prize of the Professional Association of Visual Artists (Berufsverband Bildender Kunstler).

Both Peter and Eunice Huf were regulars at Munich’s Schwabing Christmas Market, held annually since 1975. In 1994, Peter Huf founded The Art Tent at this market. The Art Tent, which Huf oversaw until 2014, gives some twenty artists – “painters, sculptors, object artists, and conceptual artists” an “opportunity to escape from the tightness of their booth and to display bigger works”, and has become a big attraction.

Mexican influences are still very apparent in Peter Huf’s work, even today. His paintings often incorporate geometric patterns and are mainly done using acrylics. To quote the artist, “My concept is my life and surrealism is part of it.”

I am very grateful to Eunice and Peter Huf for their warm hospitality during a visit to their home and studio in October 2014 which has led to a lasting friendship. Their archive of photos and press clippings from their time in Mexico proved invaluable, as did their encouragement and their memories of people and events of the time.

3 Responses to “German artist Peter Huf found love, family and inspiration in Ajijic in the 1960s”