Artist and international art educator Bruce Robert Sherratt and his first wife, Lesley Jervis, a British sculptor, lived in Jocotepec at the western end of Lake Chapala, from 1968 to 1970. Prior to their arrival in Mexico, they had lived and traveled for some time in the USA.

Bruce Robert Sherratt was born in Biddulph, Derbyshire on 31 May 1944. Both Sherratt and his wife studied at the Newcastle School of Art in Newcastle on Tyne, Staffordshire, before moving to London where they married in 1963, and where Sherratt gained his degree in drawing and painting from the Camberwell College of Arts. Many years later, as a mature student, he also completed a degree in Art Education from the University of Wales in Cardiff, U.K.

Sherratt has written of fulfilling a youthful ambition by traveling (with his wife) to Mexico, where he gradually established his own identity as a surrealist painter, “hypnotized by the Aztec, Mayan and Toltec mythology” and “drawn to the giants of Mexican revolutionary muralism such as Orozco, Rivera, Tamayo and Siquieros.”

After reaching Jocotepec, the young couple rented a huge house called “El Kiosko”, “with spectacular views of the entire lake”, set up their studio, and got to work. Sherratt describes them as “hermits”, obsessed by their work: “We were very serious, determined to develop our work and we were very ambitious.” They had relatively little connection to the Lakeside art scene of the time, though they did frequent Ramón’s bar on the plaza and got to know Jocotepec artists (Don) Shaw and John Frost.

During his time in Mexico, Sherratt held several exhibitions of his work , including a solo show at the Galería Municipal in Guadalajara in 1969. 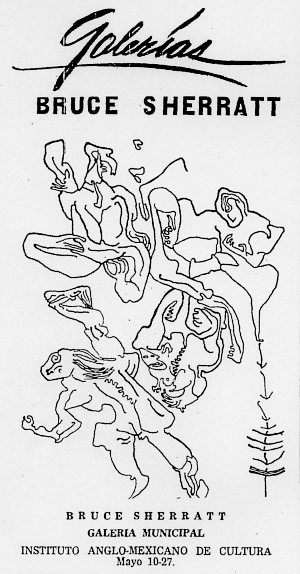 The following month (July 1970) the Anglo Mexican Institute in Mexico City held a joint show of Sherratt’s paintings and sculptures by ‘Madock’ (the art name used by Lesley, his wife). This show in Mexico City was apparently at the encouragement of the surrealist painter Leonora Carrington.

After his time in Jocotepec, Sherratt traveled to California, where he painted for a year in San Francisco. His work was exhibited in a group show at the San Francisco Museum of Modern Art (1970) and in an exhibit entitled “Surrealist Painters in San Francisco”, in the Vorpal Gallery, San Francisco (also 1970).

The following year, he had another exhibit of oils and drawings in Guadalajara, in the Galeria Municipal. In his review for El Informador, John Frost called it “a passionate description of a trip to another world”, writing that Sherratt, “guides us through regions that could alarm and depress us if it was not for his vision and artistic discipline”. El Informador‘s regular art columnist, J. Luis Meza Ina, however, viewed the show as the work of a painter, not an artist.

At the end of 1971, Sherratt’s work was included in the San Francisco Vorpal Gallery Christmas Show, alongside works by Robert Clutton (who had also lived for several years at Lake Chapala), John Denning, Muldoon Elder, Roy Glover, Stephen Haines Hall, and Gary Smith.

After his time in San Francisco, Sherratt decided to travel the world and spent several years meandering through Latin America. He became sufficiently interested in the ideas of Rudolf Steiner, and color theory, to return to the UK to take a degree in Art Education, before becoming a respected international art educator, whose teaching career has taken him to international schools in Germany, Tanzania, Sri Lanka, the Philippines, Malaysia and Indonesia.

Sherratt’s studio is currently in Ubud on the island of Bali in Indonesia, where he is the founder and CEO of the Bali Center for Artistic Creativity (BCAC). The powerful and colorful images on his website show there are few limits to his imagination and artistic abilities. In the past twenty years or so, he has exhibited in numerous countries, including several shows in Jakarta, Indonesia: a retrospective at the Duta Fine Arts Foundation (1998), a show entitled “Synthesis and Abstraction” at the British Council (2001) and an exhibition at the ExpatriArt Gallery (2005).

Sincere thanks to Bruce Sherratt for sharing, via email, some of his memories from his time in Mexico. To see more of his work, please visit his website.

This is a revised version of a profile first published 25 June 2015.