Robert Clutton (1932-2016) lived in Ajijic from about 1959 to 1961. His time in Mexico introduced him to the pantheon of ancient Aztec and Maya gods which so strongly influenced much of his later art. He revisited Ajijic several times after this initial extended stay in the village.

He left Wales in 1949 to cross the Atlantic on the Mauretania. (Until late in life he much preferred ocean liners to aircraft.) He settled in Baltimore where he became the Art Director for Black & Decker. In October 1955, he was one of numerous artists exhibiting in the The Artists’ Union of Baltimore annual show.

By 1959 Clutton was living and working in Ajijic on Lake Chapala. Several of his paintings from this time can be seen on this Facebook page of the San Francisco Senior Center. This painting of the Posada Ajijic in 1959 (below) is a fine example of Clutton’s style during his first months at Lake Chapala. 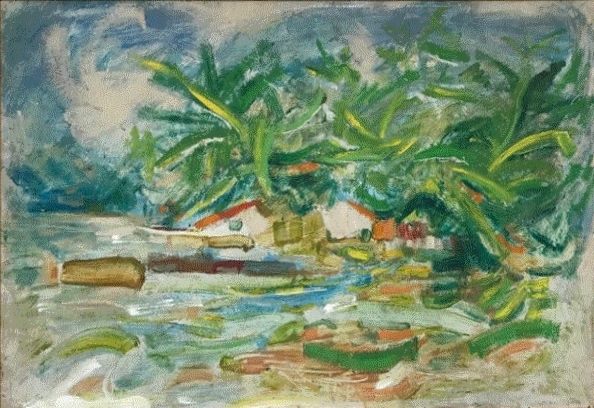 Former Ajijic gallery owner Katherine Goodridge Ingram remembers Bob Clutton as a lovely man, who was well-liked by everyone in the community. During his time in Mexico, Clutton became increasingly fascinated by the “gods of ancient Mexico” and images of these gods became a frequent theme in his later paintings.

When he decided to leave Ajijic in 1961, he chose to move to San Francisco because that was where “all the interesting people he met in Mexico” were from. He continued to make his living as a professional artist in that city for more than fifty years. He retained some close ties to Mexican friends in Ajijic, and revisited the village several times. 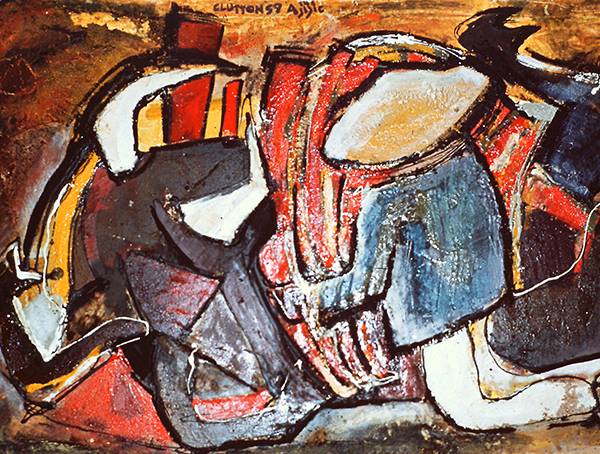 A newspaper feature in 1968, entitled “Art by the Foot” described how Clutton, “a bronzed, bearded, no-nonsense British artist” was making “made-to-measure bas-reliefs” in his Divisadero Street studio. The bas-reliefs, “designed to be decorative indoors and architectural assets outdoors”, used Aztec symbols and colors, and relied on the interplay of sun and shade to emphasize the materials, relief and texture.

Clutton was still producing “formal paintings” which also showed the influence of Mexico, and was represented by the Vorpal Gallery in San Francisco. A solo show of his oils and acrylics at that gallery in 1969 brought a wider audience for his work. Shortly after Clutton petitioned for US citizenship in 1971, the Vorpal Gallery also included examples of his work in its 1971 Christmas Show, which also featured paintings by John Denning, Muldoon Elder, Roy Glover, Stephen Haines Hall, Bruce Sherratt (who had previously lived for several years at Lake Chapala) and Gary Smith. 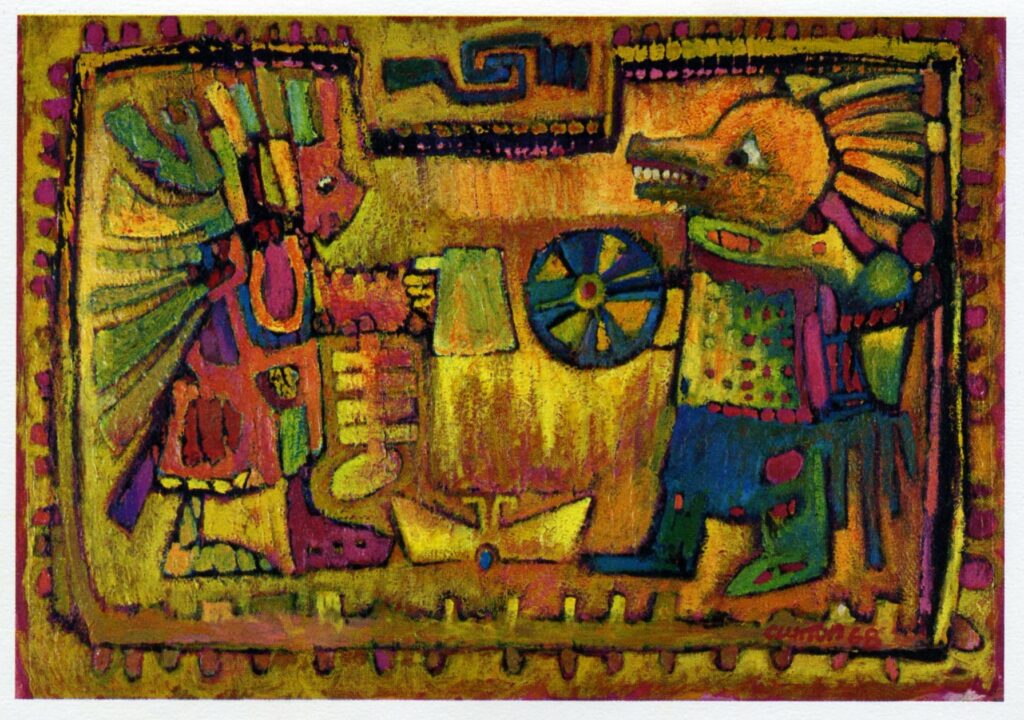 Robert Clutton. ca 1969. Tezcatlipoca in front of his smoking mirror seeing himself as Huitzilapochtli. (Vorpal Gallery)

In 1988, Clutton designed the poster for the 1988 Haight Ashbury Street Fair. He enjoyed social events, garden parties and dinners and surrounded himself with creative people, making for lively and entertaining discussions. In his final years, Clutton was active as an artist at the San Francisco Senior Center.

This is an updated version of a profile first published 1 December 2016.