Among the chance events back in the 1980s that stimulated my curiosity about the history of Chapala was finding a book titled Chapala in a used bookstore in Ajijic. While the bookstore lasted only a few months, Chapala has been in a pride of place on my book shelves ever since. 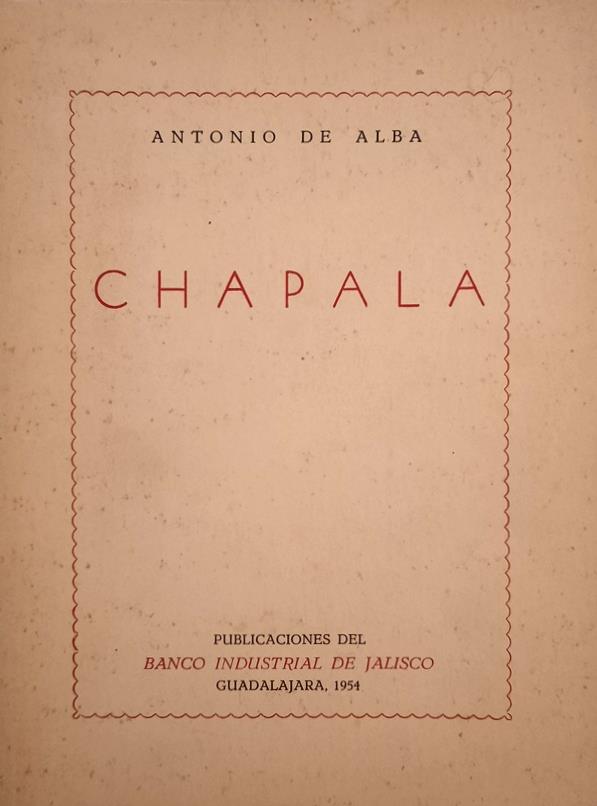 Written by Antonio de Alba, Chapala was published by the Banco Industrial de Jalisco in 1954 in an edition of 2000 copies. The 177-page book was published as de Alba was nearing the end of more than two decades of service as parish priest of Chapala.

Chapala is an impressive achievement for its time, and the earliest book to be devoted to a single town or village at Lake Chapala. The first book-length histories of other settlements—including Ocotlán, Jocotepec, Ajijic, Tizapán el Alto and La Palma—all came many years later.

Antonio Guadalupe de Alba was born on 12 December (Day of the Virgin of Guadalupe) 1900 in San Juan de los Lagos. Antonio was several months shy of his third birthday when he lost his father, Jesús Alba Alba (1856-1903), and was raised by his mother, Lucía Rodríguez Murguía de Alba (born in 1859), who died in Chapala in 1946.

Antonio de Alba served as parish priest in Chapala from 1937 to 1954. His initial appointment was not without its critics; a group of parishioners wrote to the Archbishop supporting an alternative candidate. De Alba quickly demonstrated his ability to unite the faithful and gain their respect. Shortly after arriving in Chapala (from Cocula), he helped lead the effort to build a chapel to Our Lady of Lourdes (Nuestra Señora de Lourdes) on the hillside above the Villa Montecarlo. The first stone of this chapel was laid on 18 March 1940 and the dedication service was held on 14 August 1941.

Throughout his time in Chapala, de Alba was held in high regard by his parishioners. In April 1954, de Alba was appointed Canon of the Collegiate Church of San Juan de los Lagos. He died in León, Guanajuato, on 25 December 1958.

De Alba explains in the preface to Chapala that his own interest in the town’s history had been prompted by meeting José Ramírez Flores, the author of an article titled “Chapala y su curato hasta el Siglo XVIII” in the first issue of Estudios Históricos (a Guadalajara-based magazine). In response to some queries from Ramírez, de Alba began to explore the parish archive for answers:

I discovered treasures of true greatness, hidden under the dust of the years and the carelessness of our Mexican character (which does not know how to judge the greatness of our heroes, and is not accustomed to recounting their feats).”

De Alba then devoted a lot of his time to finding and collating historical material. Though he openly acknowledges in his book that he was not a historian and did not write like a historian, he explains that he felt compelled to share “what I had discovered, which is unknown to most people.”

He singled out the need to preserve the memory of clerics, such as Friar Miguel de Bolonia who lived his final years in Chapala, and of the “heroism of our aboriginal Indians, as well as the fine nobility of almost all the Spaniards who conquered these lands and stayed here”, as well as of the “many beautiful and very honorable events in our history, such as the great actions of our local insurgents and the defense of the Island of Mezcala.”

The early chapters of Chapala are based on excerpts from, and summaries of, the early accounts of the region written by Franciscan chroniclers such as friars Antonio Tello, Antonio de Ciudad Real and others, combined with the more formal syntheses written by historians of Jalisco.

De Alba acknowledges that the second part of the book, which focuses on the twentieth century history of the town, is “taken from tradition or personal knowledge.” Some of “the interesting and instructive news related to our town” that de Alba includes is based on the recollections of some older members of his parish. These recollections, which pertain to memories from half a century earlier, are neither comprehensive in coverage nor, with the benefit of hindsight, entirely accurate.

I am quite certain, after reading and rereading de Alba, that he never intended Chapala to be the final word on the town’s history. He acknowledged its limitations but wanted to share the findings of his research, not compile a formal, comprehensive, historical account.

It is unfortunate, therefore, that so many later writers have relied almost exclusively on de Alba’s writing. Tracing the origins of what I’ve come to call the “modern myths” of Chapala’s history—such as President Díaz spending Holy Week there every year from 1904 to 1909—has led me time and time again back to Chapala. The claim about President Díaz, for example, stems from a single sentence (page 117) which we now know is not supported by contemporary documents.

In a separate post, I will clarify and correct statements made on one particular page of Chapala, in the hope that this will offer some small but significant steps towards a revised history of the town.

For its time, Antonio de Alba’s book is a true tour-de-force, and an invaluable source and inspiration for later authors, including myself. I have the highest esteem for both Antonio de Alba and Chapala. However, this does not mean that everything he wrote should be accepted uncritically and without comment or, where possible, correction. And I am hopeful that this is precisely what future authors and researchers will do in relation to my own work.

Chapala has never been reprinted, and copies are difficult to find. Fortunately for readers, Javier Raygoza Munguía, the publisher of the weekly PÁGINA Que sí se lee! has uploaded the entire text as a series of digital files (access via link).