Born in 1943, her birth name is Cynthia Siddons Jones (“Siddons” is in memory of her maternal grandfather, artist Harry Siddons Mowbray). Her family gave her the nickname “Casey” when she was two.

Casey Luria attended Colorado Women’s College in Denver, and graduated in the class of 1963. 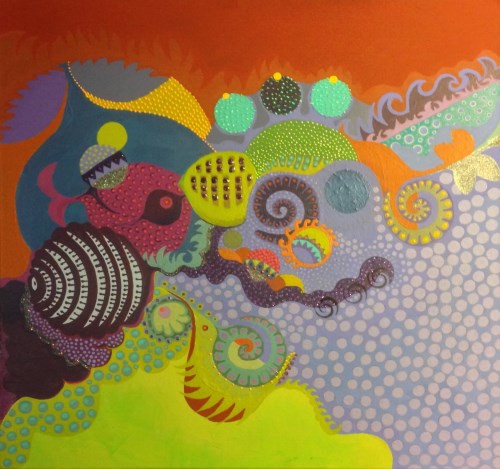 Over the years, on account of three marriages, Luria has used various different names for her art, including Cynthia Siddons, Cynthia Jones Hachten, Cynthia Jones Benjamin and, since 2001, Cynthia Jones Luria and Casey Luria.

On Valentine’s Day 1968, she married fellow artist Paul Charles Hachten in Mendocino, California. Immediately after their marriage, the young couple moved to Mexico, where they lived in Ajijic from 1968 to 1969. Peter Huf, who with his wife, Eunice (Hunt) Huf, was active in the Ajijic art community at that time, remembers Casey as “a very fine artist with a great sense for irony”. Casey became good friends with another artist who had links to Ajijic for more than forty years: Henry Edwards and his wife, Corinne. 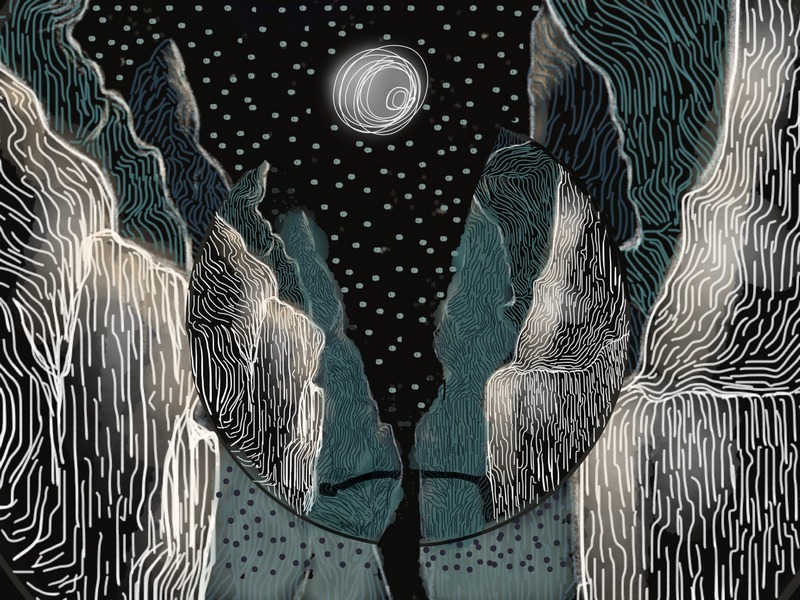 Cynthia Siddons (as she then signed her artwork) is listed among the artists exhibiting in the December 1968 to January 1969 show for the “re-opening” of La Galeria in Ajijic. The show, which opened on Friday 13 December 1968 was entitled “Art is Life; Life is Art” and also included works by Tom Brudenell, Alejandro Colunga, John Frost, Paul Hachten, Peter Huf, Eunice Hunt, John Kenneth Peterson, Jack Rutherford, José Ma. de Servin, Shaw, and Joe Wedgwood.

In April 1969, Cynthia Siddons’ work was included in another show at La Galería in Ajijic, of “El Grupo”, together with works by John Kenneth Peterson and “guest artist” Charles Henry Blodgett. The members of El Grupo at the time, according to the Guadalajara daily Informador (20 April) were John Brandi, Tom Brudenell, Peter Paul Huf, Eunice Hunt, Jack Rutherford, Shaw, Cynthia Siddons and Robert Snodgrass.

Cynthia Luria. Sundown. 2015 Reproduced by kind permission of the artist.

Cynthia Siddons held a solo showing of her paintings at La Galeria (Zaragoza 1, Ajijic) which opened on Friday 4 July 1969. (She has also held one other gallery showing in Mexico since that time, under the name Casey Luria.)

Following the end of that relationship, in 2001 she married Robert (“Bob”) Alan Luria, also an artist, in Tucson, Arizona, a marriage that lasted until 2011. The couple were living in Ajijic at the time of their marriage and remained there for about three years in total. While living in Ajijic, and in association with Mexican folk art expert Marianne Carlson, they opened an art gallery on 16 de Septiembre, across the street from the Lake Chapala Society.

Luria says that, “It was our trips together around the country [to purchase artwork] that convinced Marianne that she had to do something to help save the crafts Mexico, knowing that it would cease to exist if the artists never made any money from their craft. She doesn’t do anything small, we discovered. Maestros del Arte is amazing. I hope it continues on for a very long time.” Luria is describing the origins and success of the annual Maestros del Arte art and handicrafts fair held at the lake. Luria is pictured, along with Carlson and Teresa Kendrick in a photo to commemorate the first Maestros del Arte show (in 2005 at the Hotel Italo in Ajijic) in the December 2005 issue of El Ojo del Lago. The event has become one of Mexico’s most important exhibitions of folk art, bringing in artisans and their work from all over the country to showcase and sell their creative output. Luria attended the show regularly until recently. 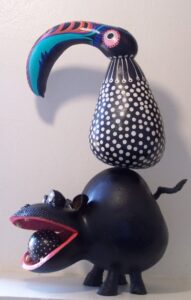 Casey and Bob Luria left Ajijic after Bob had two serious health scares. They settled in Silver City, New Mexico, where Casey ran a gallery called Bloomin Gourdworks, making whimsical gourd sculptures and totems to complement her jewelry designs. Her jewelry was shown at the Yellow Gallery in Silver City, and the gourd sculptures were displayed at Details, Art and Design in Tucson, Arizona. She also donated pieces for benefit auctions for the cancer society, the Tucson museum of art, and the city’s Symphony Orchestra.

In 2008, Cynthia (Casey) Luria joined with two fellow artists -Randi Olson and Connie Powers – to open a store called the “Silver City Bag Ladies” in Silver City, where they sold unique handcrafted bags. (Desert Exposure, October 2008). Luria is quoted as saying at the time that “We are experimenting with all sorts of materials, in all sorts of sizes and shapes. I guess you’d say, ‘Whatever’s your bag!'”

Luria currently resides in the Tucson area of Arizona where she is turning her attention to mastering papier-mâché sculpting. Though Luria’s first love was painting, and she continues to draw and paint, she has increasingly become devoted to sculpture. Her creations are often quirky, designed to amuse.

As an artist, Luria says that she paints primarily for fun and draws inspiration from Dr Seuss, as well as from Mexican and Aboriginal art. The link – https://paper.fiftythree.com/4237897 – had some interesting and colorful examples of her iPad artwork, which she describes as “zen tangles and doodles” and “stream of consciousness painting”.

Sincere thanks to Casey Luria for graciously sharing memories and information related to her career and time in Mexico. (This is an updated version of a post first published 16 June 2016.)