Gerald van de Wiele was 19 years old when he visited Ajijic briefly with his good friend and fellow artist George “Jorge” Fick in 1951. Sixty-six years later, and despite never having returned to the area, van de Wiele completed an abstract painting entitled “Chapala.”

What were the circumstances of van de Wiele’s original visit, and why was it so long before he painted “Chapala”?

Born in Detroit in 1932, van de Wiele and Fick (1932-2004) visited Mexico more or less on a whim. After studying for a few months at the Art institute of Chicago on a national scholarship, van de Wiele had applied to Black Mountain College. The same day he received his acceptance letter, he also received his draft notice. 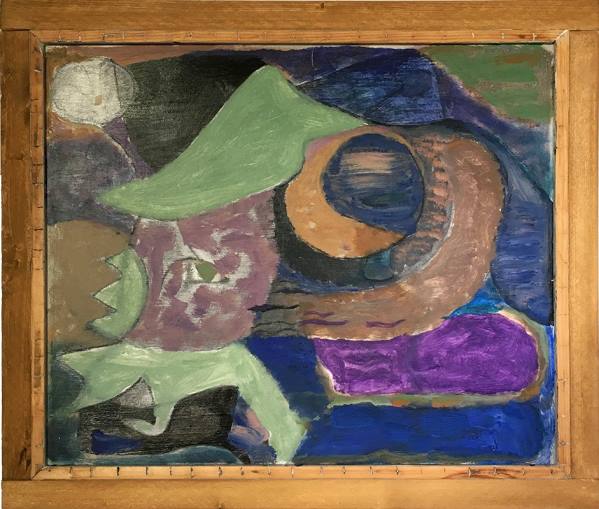 Before turning up for training, van de Wiele and his good friend Fick took a road trip out to California, where they spotted Lake Chapala while looking at a map of Mexico, and decided to catch the train to Guadalajara to see the lake for themselves.

It was November 1951. During the day or two they spent in Guadalajara, before catching the bus to Chapala, the two young men explored the city on foot. Beautiful classical piano music coming from a house they passed led them to knock on the door to thank the occupant. They were invited inside and introduced to a female pianist who was—said their host—“one of Mexico’s most famous pianists.” To this day, van de Wiele has no idea who the pianist was, but the young men were amazed by the hospitality and enthralled by the music. The magic of Mexico had struck again.

When Fick and van de Wiele got off the bus in Chapala they entered a hotel (possibly the Hotel Nido) where they met an American journalist who invited them to stay at his chalet overlooking the lake.

Even though van de Wiele stayed only two weeks at Lake Chapala, the visit was memorable and remained “every vivid” in his mind. (Fick stayed on in Chapala for a few months.)

On van de Wiele’s return to the US, he did his basic military training in San Diego. By lucky coincidence, he was then posted to join the 2nd Marine Division in Camp Lejeune, North Carolina, from where he was able to use a couple of weekend passes for quick visits to Fick who was now studying at Black Mountain College. Having been forced to postpone his own studies, Van de Wiele, with funding from the G.I. Bill, attended the college from 1954 to 1956.

The year after leaving Black Mountain College, van de Wiele, now married, joined with several friends to open Wells Street Gallery in Chicago. This gallery was partly financed by Stanley Sourelis (1925-2006), who later lived and painted in Ajijic for many years.

Van de Wiele held his first solo show at the Wells Street Gallery in October 1957. Two years later, van de Wiele moved to the much larger and more competitive art scene in New York City, which has been his home ever since.

Van de Wiele has exhibited regularly in New York, and his works can be found in numerous major private and institutional collections.

And van de Wiele’s painting, “Chapala”? Well, it turns out—the artist told me— that it has absolutely nothing to do with Chapala apart from the title! After completing the painting in 2017, van de Wiele was pondering the best title and “Chapala” popped into his head at just the right moment. “Chapala” was first exhibited in 2018 at a major retrospective of van de Wiele’s work, covering seven decades of painting and sculpture, at the Black Mountain College Museum + Arts Center in Asheville, North Carolina.

For more about Gerald van de Wiele and his amazing art, please visit his website.

[Note: Fick’s biography, as submitted to art websites by his widow, Judy Perlman, shows Fick as attending a “Mexican Art school Ajijic, Guadalajara” in 1951. However, van de Wiele has confirmed to me that Fick had not been in Ajijic previously, that they arrived in late November or early December 1951, and that their trip did not involve any formal art classes. There are no records of any winter art classes in Ajijic at that time.]