Muzenic graduated from the University of Kansas at the age of 19 before studying on a scholarship at the Art Center School of Los Angeles. After serving in the US Navy for a year, from 22 June 1944 to 23 May 1945, he continued his art education at Black Mountain College.

Black Mountain College was a liberal arts college in North Carolina; its faculty members at one time or another included such luminaries as Josef Albers and Anni Albers, John Cage, Merce Cunningham, Buckminster Fuller and Aaron Siskind. 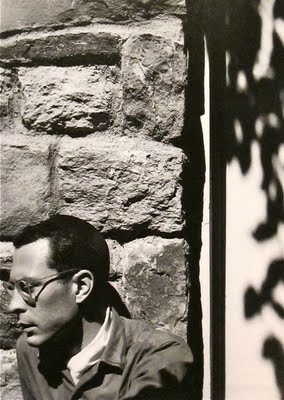 This portrait of him, in his time at Black Mountain College, was taken by Hazel Larsen Archer, a fellow student.

In November 1946, one of Muzenic’s paintings, “Introspection”, was included in an exhibit for a Children’s Fair at New York’s Museum of Modern Art (MOMA).

After college, Muzenic’s first solo exhibition was at the American British Art Center in New York. This show, which opened on 6 January 1948, featured at least 24 works; the introduction to the catalog was written by Anni Albers. Later that year, the same collection was hung in Chicago. According to The New Yorker, this was “A first one-man show of abstractions that indicate a perceptive sense of color and pattern.”

We know more about Muzenic’s next few years, when he moved to Mexico and lived in Ajijic for at several years from about 1948 to about 1953. During that time, he was employed – along with Tobias Schneebaum and Ernesto Butterlin – by Irma Jonas to teach students attending her summer painting schools in Ajijic.

According to Schneebaum, an ill-fated love triangle developed between the three artists at this time, complicated by the arrival of “haughty and radiantly beautiful” Zoe, the “fourth member of our group”, who had previously been living with Henry Miller in Big Sur. 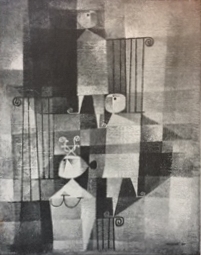 Schneebaum, who shared a house with Muzenic for part of his time in Ajijic, described Muzenic as tall, “cold, haughty and grand.” As for his paintings, “Nicolas’s paintings were as tight, involuted and hard-edged as his body, and were somber with browns and dirtied yellows, unlike the clarity, brilliance and simplicity of his teacher.” (Schneebaum, Wild Man 13).

The teacher Schneebaum is referring to is Josef Albers. In his Secret Places, Schneebaum recalls that Muzenic “had been a student of Josef Albers at Black Mountain College. Albers himself arrived one afternoon, accompanied by his wife, Anni. They spent a couple of nights in Ajijic.” (Secret Places, 7) 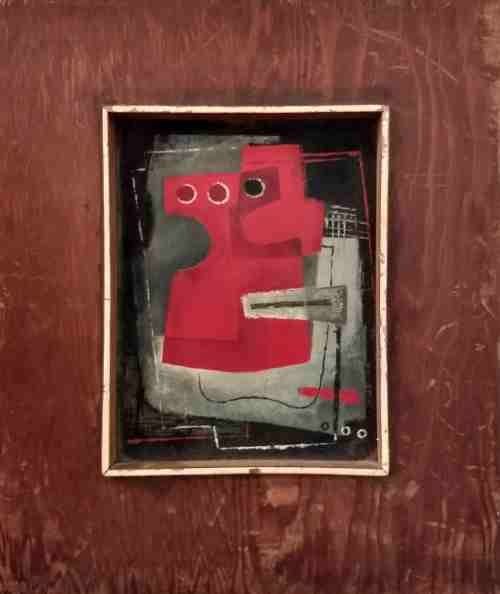 Muzenic’s work was included in two group shows in 1949. The first, in March at the State Museum in Guadalajara featured works by the four artists of “the Ajijic group (Muzenic, Louise Gauthiers, Ernesto Linares and Tobias Schneebaum), along with works by Guadalajara-based abstract-surrealist artist, Alfredo Navarro España. The second exhibit – at the Villa Montecarlo in August 1949, and billed as the “4th Annual Painting Exhibition” – showcased works by Muzenic, Tobias Schneebaum, Alfredo Navarro España, Shirley Wurtzel, Ann Woolfolk and Mel Schuler.

Muzenic held a solo exhibition, which opened on 23 September and closed on 15 October 1953, in Mexico City at the Galería San Ángel (Dr. Gálvez 25), in the southern part of the city. The program of that exhibit included an introduction by Anni Albers praising his use of form, color and composition.

He was scheduled to have his fourth solo show at the Santa Barbara Museum in November 1953. By this time examples of his paintings were already in various prestigious private collections, including those of Fred Olsen, Henry P. McIlhenny, Joseph Pulitzer Jr., and Mrs Huttleston Rogers.

While in Ajijic, Muzenic became a close friend of Eileen and Bob Bassing. After the Bassings returned to California and one of Eileen’s novels was turned into a screenplay, they used the resulting windfall to commission Muzenic to design them a home on  Carbon Beach, Malibu, a home later featured on the cover of Time magazine.

By that time Muzenic had left Ajijic and was living in California, where he worked mainly as an interior designer, employed for many years by the Welton-Beckett architectural firm in Los Angeles. Schneebaum says that Muzenic “lived alone in Los Angeles, rich, isolated, and introspective.” (Wild Man, 18). A few days after losing his job, he was found dead in his own home.