The talented and versatile artist Alfredo Navarro España was a photographer and painter who first exhibited in Chapala in 1948 and was most active during the 1950s. One of his photographs of fishing nets at Lake Chapala was published by Arizona Highways in 1950, along with several of his drawings and paintings related to Mexican places and themes. 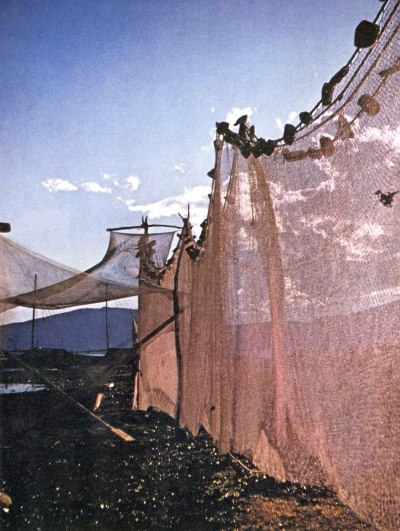 Guillermo Alfredo Navarro España was born on 27 June 1921 into a socially-prominent family in Guadalajara. His mother was Sara España Araujo. His father, Alfredo Navarro Branca, was a well-known architect who, among other things, designed and built the family home at Vallarta 1581, as well as the El Banco Industrial building, La Casa del Estudiante, and several schools in Guadalajara.

It is unclear how Alfredo acquired his artistic education but he became proficient in several media. Relatively little is known about his life beyond the details of some of the group exhibitions that featured his work.

Alfredo was also part of the “Fourth Annual Painting Exhibition” at the Villa Montecarlo in August 1949. Other exhibitors on that occasion included Nicolás Muzenic, Tobias Schneebaum, Shirley Wurtzel, Ann Woolfolk and Mel Schuler.

The November 1950 issue of Arizona Highways included various of his photos and paintings of Mexico. Perhaps in celebration, Alfredo took a flight from Guadalajara to Manzanillo that month in the company of Dorothea Wharton, Ernesto Butterlin, Nicolás Muzenic and John Garrell. The following images are a sample of those published by Arizona Highways. 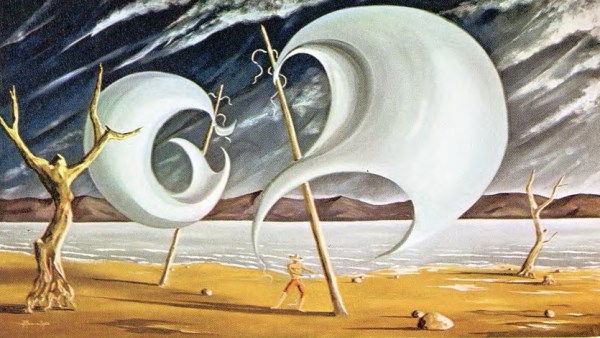 Also included in the Arizona Highways magazine are several much simpler, but equally striking, paintings showing typical Mexican scenes (which may or may not be directly related to Jalisco or Lake Chapala). 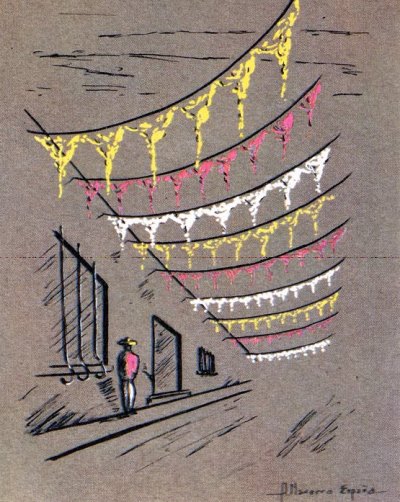 The strong, geometric, composition of these works is very effective in conveying the essence of these festive occasions. 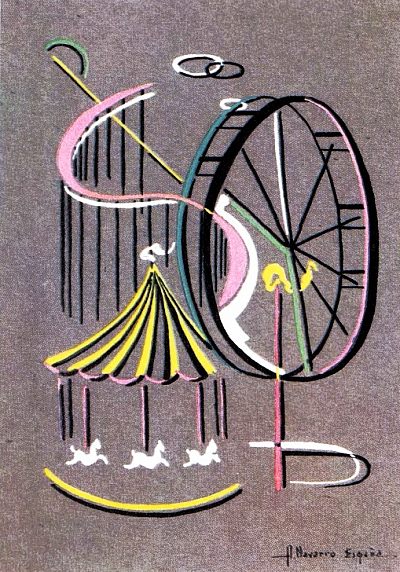 In December 1950, Alfredo was accorded the honor of a solo show at the Galeria de Arte Moderno in Mexico City. On display were 23 paintings, several of them on loan from the private collections of Sigi Weissenberg (a famous Bulgarian pianist), Daniel K. Davis and Ernesto Javelly. The paintings included one entitled “Chapala,” as well as others that may be related to the lake, such as “La pesca.”

Alfredo was sufficiently close to the painters teaching at the Ajijic Art Workshop that he is mentioned in Zoe Kernick‘s 1951 article about Ajijic, as one of the options for those looking for a lively social scene: – “Or one goes into Guadalajara for a party at the gay penthouse studio of surrealist painter, Alfredo Navarro.”

A critique of his work by Alfredo Leal appeared that year in Ariel, a literary broadsheet published in Guadalajara by Emmanuel Carballo, alongside monochrome reproductions of two of his paintings: “La Pesca” and “La Catedral Sumergida.”

Alfredo Navarro held a second one-man show in Mexico City in July 1957, at the Galeria Proteo in the Zona Rosa.

Almost exactly a decade later, at least two of his abstract works were included in a group show of contemporary Jaliscan artists at the Phoenix Art Museum in Arizona, alongside paintings by Xavier Guerrero, J. Jesus Serna, Gabriel Flores and Guillermo Chavez Vega.