John Upton, the translator of poets such as Pablo Neruda and Miguel de Unamuno, and of several seminal works of Spanish literature, lived (off and on) in Ajijic from 1949 to the early 1990s.

In the early 1950s, Upton submitted several colorful pieces about Ajijic and Mexico for the San Francisco Chronicle, including one about the seasonal summer influx of art students:

I had the good fortune to spend an afternoon with Upton at his home in Ajijic in 1990. He was a most gracious host and very supportive of my efforts to document the life of “Zara”— “La Rusa”—the famous ballerina, a longtime resident of Ajijic, who had died in the village a few months earlier.

A couple of years ago, after I’d written a profile of Upton for this blog, I was visiting with journalist and good friend Dale Hoyt Palfrey. I don’t recall how the topic of Upton came up. But she suddenly broke off the conversation and left the room for a few minutes. She returned clutching a small blue notebook which she handed to me. To my surprise it was one of Upton’s notebooks, written and illustrated in his own hand. She insisted on me taking the notebook (I consider myself its custodian rather than its owner) so that I could see what gems it contained.

The pages offer a sneak peek into Upton’s many interests. Scattered notes suggest that it accompanied him on a trip to Mexico City and the Maya region of the Yucatán Peninsula and Guatemala. Page after page contains notes—usually illustrated with informal sketches—regarding the reading of Maya glyphs and numbers. 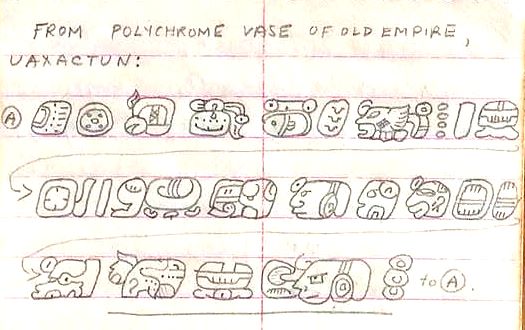 Extract from p 23 of John Upton’s notebook; all rights reserved.

Other pages of the notebook record vocabulary that Upton, for one reason or another, found interesting. Upton, a highly skilled translator, was considered an expert in the idiomatic and colloquial usage and translation of Spanish, with all its regional differences. These pages shed some insight into how Upton acquired his extraordinary linguistic proficiency. 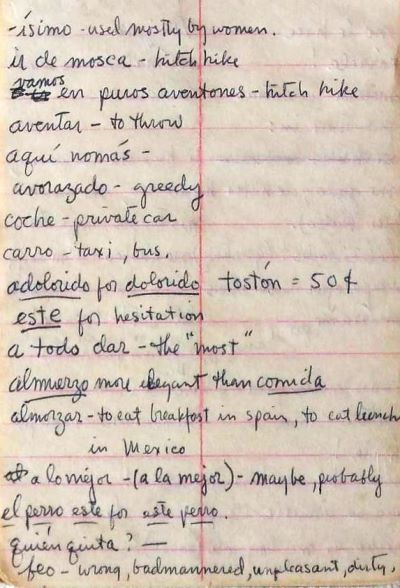 Extract from p 37 of John Upton’s notebook; all rights reserved.

Upton was a keen observer as he traveled. The notebook includes this short piece of prose, headed “Extraneous page,” apparently written to share later with a writing colleague:

Could you make a story of this scene in Mexico City?

Couple at the next table: woman of about 45, too much make up, clothes too loud, obviously a whore, sitting with a very shy young man. He is wolfing food as fast as she can order it (she eats nothing – just sits and watches him eat) and as fast as the waitress can bring it: soup, sandwich, order of enchiladas, milk, coffee, large piece of cake – all these are on the table and she orders something else when it occurs to her. She smokes a cigarette and never takes her eyes from his face. (On second look, there are TWO glasses of milk.)

“But, chico! Why didn’t you tell me? Sure you needed a woman, but you can’t spend your last twenty pesos that way. You have to eat, niño!”

He looks up at her from his soup and smiles, shyly; whereupon her battered face lights up and she seems quite pretty.     — [pages 71-72 of notebook]

I would love to know whether this scene was ever incorporated into a short story or book.

Even at the best of times, traveling is sometimes stressful. One evening in San Miguel de Allende, Upton used his notebook (pages 81-82) to vent his frustration at events earlier that day.

Mexicans at their most maddening:

Upon getting off the train at San Miguel A., we were met by two porters who latched on to the suitcases. The women wanted to buy return tickets before leaving the station, as it is some distance from town.

—“Where is the ticket office?”

—“This way.” Men pick up suitcases and we follow them for 300 yards to the far end of the station building. We reach the door and he puts down the bags. “Only it isn’t open right now.”

This information didn’t satisfy me. I walked around the grounds until I found a man who looked knowing. —“When does the ticket office open, please?”

—“The ticket agent just left a couple of minutes ago. It’s closed now.”

—“It’s closed for the rest of the day. The man just left. He went to Celaya.”

—“Well, what about tomorrow? When will he be here?”

—“He won’t open tomorrow, because it is Sunday. Not until Monday.”

—“And when will he open Monday?”

Upton’s deep love of Mexico—enhanced by his study of its people, language and cultures—led to an understanding of the country, and an appreciation for its history and achievements, that is surely a model for all of us.

2 Responses to “John Upton: a sneak peek into a translator’s notebook”