John Elbert Upton was born on 10 September 1917 and died aged 88, in Monterey, California, on 9 October 2005. He was a multi-talented individual who earned his living as a translator and teacher. Upton lived in Ajijic for over a decade, from 1949 to 1959, and then returned to live in the village several times (for varying lengths of time) from the 1960s through to the early 1990s.

Upton’s circle of friends in the Lake Chapala area included fellow translator Lysander Kemp, who lived in Jocotepec, and poet and literary figure Witter Bynner, who had a home in Chapala.

Upton majored in music and Spanish at college, becoming an extremely proficient classical guitarist. In 1966, he gained a Masters in Spanish Language and Literature from the University of Madrid in Spain. 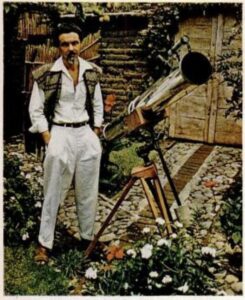 During his early days living in Ajijic, in the 1950s, Upton wrote several colorful pieces about the area for the San Francisco Chronicle, but made his living not by writing but as a teacher to the children of expatriate families. These students included a young Katharine Goodridge Ingram, who went on to run a very successful art gallery in the village. She has particularly fond memories of Upton: “He was my tutor when I was a young girl. Truly a Renaissance man: played guitar, bass fiddle, brought solar-heated water to his Ajijic house, accompanied his wife as she sang hot old cabaret oldies, built a telescope, etc.”

This photo by Leonard McCombe shows a youthful and sartorially-elegant John Upton setting up a telescope he had built in his garden in Ajijic. It appeared in the 23 December 1957 Life Magazine article, “Yanks Who Don’t Go Home. Expatriates Settle Down to Live and Loaf in Mexico.”

Upton wrote a short piece, “Maya Today” (a linguistic study of the Mayan language Yucateco in Yucatán), published in the December 1962 issue of The Modern Language Journal, but was far better known as a Spanish-English translator. Upton’s fine translations introduced generations of English-speaking readers to the extraordinary diversity and creativity of Spanish-language literature.

Besides translations of poems by the likes of Pablo Neruda and Miguel de Unamuno, his published translations include:

John Upton was one of the many extraordinarily gifted individuals who have shaped the long artistic and literary history of Lake Chapala. He will long be remembered for the supreme quality of his translations, whether of poems, literature or non-fiction.