Sadly, so far, we have learned nothing more about his time in Chapala. 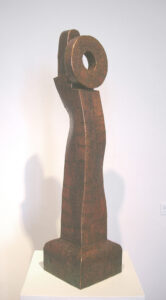 Schuler was born in San Francisco in 1924 and died at his long-time home in Arcata, Humboldt County, California on 20 May 2012.

The Humboldt State University website describes how, “While working as an art professor at Humboldt State University he developed a form of sculpture characterized by tall, irregular, solemnly monumental columns in elegantly carved and finished black walnut; they were sometimes clustered and partly enclosed in “racks,” and suggested archaic runes and totems. In the 1970s he turned to carving rhythmically organic columns in redwood, which were then covered with overlapping plates of copper that formed scaly, armor-like carapaces, and given a rich green patina that suggested great antiquity.”

In 2013, a permanent gallery for his works was opened in Eureka, California. The Melvin Schuler Court Gallery, created by Dan and Jayne Ollivier, opened on the second floor in the Gross building, at corner of 5th and F streets.  Ollivier has been quoted as saying, “Mel’s sculpture has enormous presence. Mel would say to me, ‘If it sings to you, it is a great work of art.”

Schuler continued to paint, as well as sculpt, throughout his life; the walls of his Arcata home were adorned by his own paintings, displayed alongside art collected from his travels in Africa and India.