Catalan artist and writer Avel-lí Artís-Gener, who often signed his art simply “Tisner”, left Spain for exile in Mexico following the Spanish Civil War (1936-1939). He lived in Mexico for 25 years, and visited and painted Lake Chapala in the early 1940s. 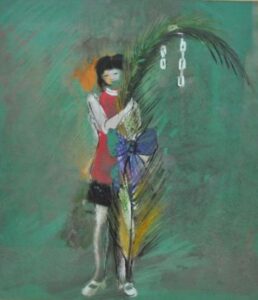 Artís-Gener exhibited numerous times in Mexico City. His work was included in a group show for the 4th National Floriculture Exhibition in May 1945, and a painting entitled “Chapala” featured in his third solo exhibit in Mexico City in the first half of September 1946, in the vestibule of the Cine Mageriti.

Artís-Gener has another interesting link to Chapala. One of his students for watercolor classes was Conrado Contreras, who has since produced, among other works of art, numerous fine watercolors of the Lake Chapala area. Contreras and his wife (poet, writer and educator Zaida Cristina Reynoso) moved to Chapala with their two young children in 1975, and have lived here ever since.

As a young man in Spain, Tisner had articles and cartoons published in a variety of media, including El Be Negre, Mercantil, l’Opinió, La Rambla, Esport i ciutadania and La Publicitat.

At the start of the Spanish Civil War, Tisner received death threats and fled to Paris. Soon after, he joined the Republican Army and returned to fight. During the war, Tisner edited Meridià, Amic and Vèncer, magazines written for the combatants.

During his time in Mexico (from 1940), Tisner worked as a journalist, cartoonist and scenery designer for Mexico City’s Channel 4, as well as working in publicity and as an editor. He retained close links with other exiles from the Catalan community. His cartoons appeared in Full Català, Quaderns de l’Exili, Revista de Refugiats d’Amèrica, Lletres, Pont Blau, Tele-revista, La Nostra Revista (founded by his father), and its successor La Nova Revista, founded by the artist himself. 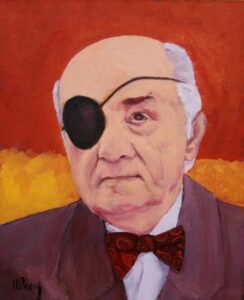 In 1965, Tisner returned to Catalonia, where he worked initially as a journalist for the daily El Correo Catalán, and later became deputy director of the Catalan weekly Tele/Estel. In 1970 he translated Gabriel García Márquez’s Cien años de soledad into Catalan. During his later years, he worked for a large number of different newspapers and magazines, including Avui, El Periódico, Catalunya Informació, L’Avenç, Serra d’Or, Canigó, Cultura, El Triangle, El Món, Presència, and Espais mediterranis.

Tisner was politically active in the 1980s, and in 1988 received the Creu de Sant Jordi, one of the highest civil distinctions awarded in Catalonia. He also won a City of Barcelona prize for Catalan prose. He was a founding member of the Association of Catalan Language Writers, and the group’s president from 1990 to 1994.