When I first wrote about Salomón Zepeda several years ago, I confessed that my research had failed to unearth anything of substance about him, despite the fact that he published a Spanish-language novel set at Lake Chapala in 1951.

Salomón Zepeda was the author of La Ondina de Chapala (“The Water Nymph of Chapala”), a 149-page Spanish-language novel published by Imprenta Ruíz in Mexico City. The cover art appears to be by “Magallón.”

Several subsequent attempts to find out more about the author met with equally dispiriting results. Knowing nothing beyond the cover of the novel, I had always assumed, based on the cover art, that it was almost certainly a pocket romance of relatively limited artistic merit. 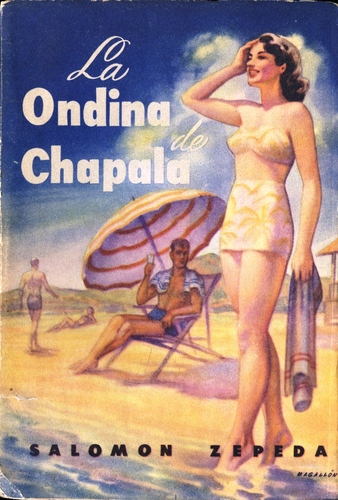 However, I was forced to revise my opinion after my able and indefatigable research assistant in Mexico, Sra. Maricruz Ibarra, managed to acquire scans of the entire book. Realizing that the novel was not simply a throw-away romance prompted me to try once again to seek more details of its elusive author.

I can finally offer a few tantalizing clues about the author’s life and work. Salomón Zepeda was born in Tala, Jalisco, on 5 May 1917. His parents were Juan Zepeda Lara (then aged 32) and Gregoria Mariscal (29). He apparently had at least two brothers: Feliciano and Jorge. A close reading of his novel strongly suggests that he had a privileged upbringing. He was certainly familiar with European literature, art and history.

Zepeda appears to have lived most of his life in Mexico City, where he died on 26 May 1985. His death certificate lists him as “single” and gives his occupation as “writer.” His home was at Privada Avena 7, Granjas Esmeralda, Tlalpan.

If you are interested in reading La Ondina de Chapala, you may be able to borrow, via inter-library loan, one of the copies held in a number of academic libraries in the U.S. These libraries include the “Southern Regional Library Facility” of the University of California Los Angeles.

While I have yet to find any evidence that he published a second book, the back page of La Ondina de Chapala refers to two works in progress: a collection of stories entitled Los Rostros Alucinados (“The Hallucinating Faces”) and a novel titled La Ciudad Doliente (“The Suffering City”). If you know anything about either of these works, please get in touch!

I take a closer look at La Ondina de Chapala in a separate post.

Note: This is an updated version of a post first published 12 December 2016.