Stanley George Sourelis, who was born in Chicago on 26 June 1925 and died in Dallas on 27 December 2006, was a chemical engineer and versatile artist who lived his final years in Ajijic. He was constantly experimenting. In his early artistic career he painted portraits, abstract oils and produced hundreds of charcoal drawings. During his time at Lake Chapala he used his scientific skills to become an expert practitioner of encaustic art.

Curiously, Sourelis’s artistic claim-to-fame as a co-founder of the landmark Wells Street Gallery in Chicago in the late 1950s has been almost forgotten. The Wells Street Gallery was THE avant-garde gallery in Chicago during its short spell in that city (from 1957 to 1959) before it relocated to New York, the then-hub of the U.S. modern art movement. Sourelis was far more than simply a financial backer of the gallery, as rather disparagingly described in most accounts; he also had a major artistic contribution to the gallery’s success.

Sourelis, the son of Greek immigrants, grew up in Chicago; he learned English only after starting kindergarten. His first name, originally Stelios, was changed to Stanley purely for convenience, as was quite common at the time. 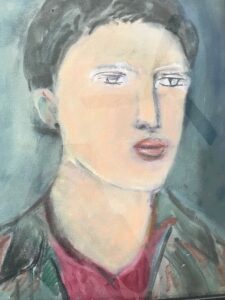 Sourelis was unemployed prior to serving in the U.S. military from 17 April 1944 to 7 May 1946. After the war, he studied chemical engineering in his native city at the Illinois Institute of Technology. He was awarded his bachelor’s degree by that institution in June 1948.

As a chemical engineer, he helped install factories producing chemicals and foodstuffs for a variety of corporations, including Unilever, Cargill and Aarhus, a career that took him to several U.S. cities, Toronto in Canada, and to Guatemala and Mexico. 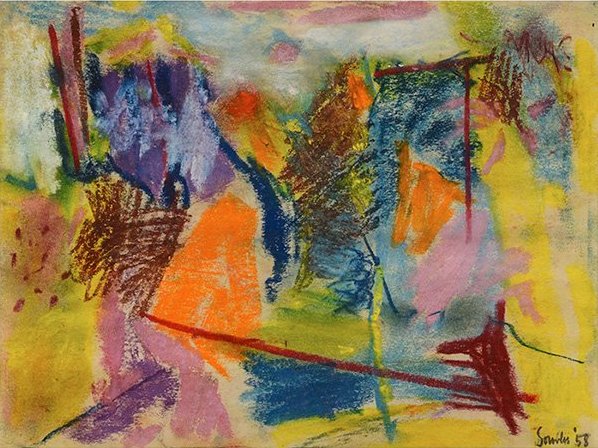 According to an article published when the vanguard Wells Street Gallery opened in 1957, Sourelis’ interest in painting began in the 1950s and what had “begun as a diversion” had become “a burning enthusiasm”. Several of his abstract paintings were in the group show that marked the gallery’s opening, along with works by 15 other painters. Examples of Sourelis’ paintings were also included in a group show at the gallery the following year, shortly before it celebrated its first anniversary with an exhibition of works, loaned from private collections in Chicago, of abstract expressionist art by such greats as Franz Kline, David Smith, Jackson Pollock, Ashile Gorky, Mark Rothko and Willem de Kooning. In November 1958, the two co-founders of the gallery – Sourelis and Robert Natkin – held a joint show at the gallery. 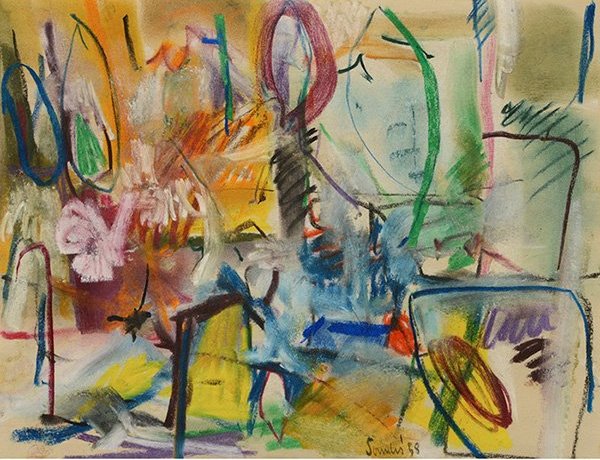 In 1963, Sourelis had the distinction of having one of his works selected for inclusion in the 66th Annual Exhibition by Artists of Chicago and Vicinity. It is unclear if his oil painting – “Changing Joy Nab”, priced in the catalog at $900 – actually sold or not. By coincidence, Harry Mintz, another artist with close connections to the Lake Chapala area, also had a work in that show.

During his time in Ajijic, Sourelis used his advanced knowledge of chemical processes to explore the possibilities offered by encaustic art. Sourelis himself explained in a short article how:

“Encaustic painting, also known as hot wax painting, involves using heated beeswax to which resins and colored pigments are added. This results in a paste-like medium which is applied to a surface such as prepared wood or canvas….

Electric hot plates, irons, heat lamps and even flame torches are used to fuse the encaustic mixture to the canvas and to allow the surface to be manipulated….

Encaustic is a demanding organic medium which engages the artist in a process of controlled accidents with unpredictable results that can be selectively enhanced. It is a medium that provides a seductive skin that is unusually malleable and changeable.
It can evoke sensations and emotions of transformation, religious ritual, history and the passage of time in the hands of an accomplished artist.” 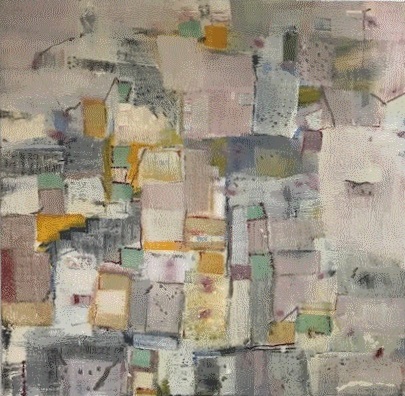 While the precise years he spent in Ajijic are unclear, Stanley Sourelis was still exhibiting there the year he died. His work was included in a group show in Ajijic in 2006, held in the offices of Actinver (then A. W. Lloyd). The artists in this show also included Antonio Cárdenas, Efrén González, Gerry Krause, Julie Mignard, Daniel Noll, Diane Pearl, Cynthia Roberts and Ana Tolere.

Sourelis married five times. His third wife was noted painter and sculptor Barbara Chavous (1936-2008). The couple met in New York and married in the 1960s. Prior to the marriage (her second), Barbara had been teaching in the New York City Public School System. The newly-weds left the Big Apple to establish their home in her native city – Columbus, Ohio – where Barbara mentored artists, served as artist-in-residence at several colleges and universities and became recognized as “Columbus’ artistic mother.”

Best known for her Jazz Totems (tall layered-wood pieces often using found objects), her work has won numerous awards and can be seen at several locations in Columbus including Bicentennial Park, Kwanzaa Playground and Main Library. She attributed the sense of color that characterizes her work to the influence of Stanley Sourelis. The artistic couple were mentors to numerous Columbus artists – Queen Brooks, Terry Logan, Pheoris West, Candy Watkins, Stephen Canneto, Walt Neal and Sandy Aska, among others.

Stanley Sourelis’s fifth wife was Sheryl Ann Stokes Sourelis (1944-2001). Born in Carlsbad, New Mexico and raised in southern California, Sheryl had moved to Guadalajara in her teens to live with her father and stepmother. After finishing her education in Guadalajara she studied art in Europe, including classes at the Sorbonne. Examples of her paintings were included in a 1974 group show in La Galeria del Lago in Ajijic, alongside works by the multi-talented artist and guitarist Gustavo Sendis and his mother, Alicia Sendis. That show opened in March 1974.

Sheryl Sourelis was a talented impressionist artist; cards featuring her lively Mexican village scenes and landscapes, marketed in Ajijic and Puerto Vallarta, sold well. Sheryl also worked in real estate and at one time had a bakery in Puerto Vallarta. She lived year-round in Ajijic from about 1996 until her death in 2001. She was a great supporter of local charities and had major parts in two Lakeside Little Theatre productions: “The Little Foxes” (October 1999) and “Shadowbox” (October 2001).

Stanley Sourelis’ daughter, Dian Sourelis, based in Chicago, has also become an exceptionally accomplished artist and has inherited her father’s passion for encaustic art.

My thanks to Lorraine Farrow, owner of the delightful Galeria Sol Mexicano in Ajijic, for first bringing to my attention Stanley Sourelis’ long-time connection with Ajijic, and to Dian Sourelis for kindly sharing memories of her father’s life and photos of his work with me.