German painter Paul “Pablo” Fischer lived in Mexico for many years and painted at least two watercolors of Lake Chapala. Fischer (1864-1932) was born in Stuttgart, Germany, and earned a medical degree at the University of Munich in 1884.

He traveled to Mexico in about 1890 to administer an inheritance in the northern Mexico state of Durango. From 1890 to 1895, Fischer worked was the resident doctor in the Mina del Promontorio mine in that state.

During those years he became known as Pablo Fischer. He went into private practice in the City of Durango in 1895, the same year he married a local Mexican girl, Gertrudis; they had a son and two daughters.

The family later moved to Lerdo and still later to Torreón (Coahuila) where Paul Fischer died in 1932.

Fischer painted watercolors for pleasure and was completely self-taught. Painting was clearly his passion, He made preliminary sketches for his paintings during the family’s vacation trips to various parts of Mexico. Fischer rarely dated his paintings, but is known to have painted scenes in numerous states, including Durango, Mexico City, Cuernavaca, Cuautla (dated 1897), Puebla, Oaxaca, and Chapala. 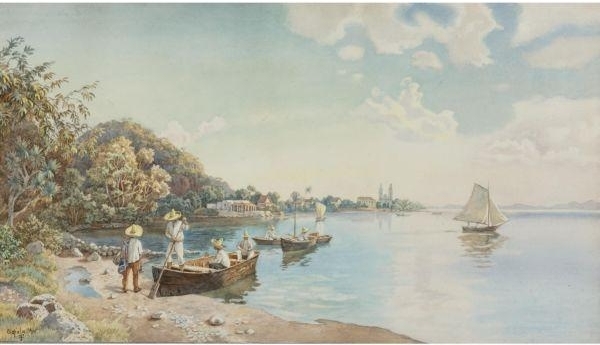 It is not known for sure when Fischer painted his small watercolors of Chapala, though they were probably all painted at roughly the same time. The first is a view of the lakeshore and fishing boats, as seen from west of Chapala, looking back towards the main church.  [Note: This painting is incorrectly attributed on several art websites–presumably because of the coincidence of name–to Danish painter Paul Gustave Fischer (1860-1934), though there is zero evidence that the Danish Paul Fischer ever visited Mexico.]

Pablo Fischer’s second view is from a boat on the lake, looking back towards the town of Chapala, the church, and the Hotel Arzapalo. Since the Hotel Arzapalo is shown as complete (with its second story), we know that this painting was completed after 1898, the year when the hotel opened. 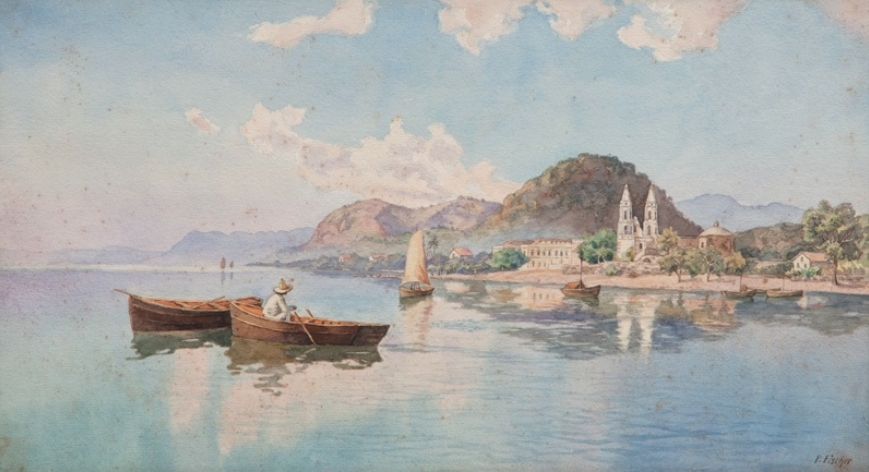 Art researcher Juan Manuel Campo has informed me that a third painting of Chapala by Fischer is also known. Painted from a very similar position to the image above, apparently from several years later, it shows the typical sail canoes (canoas de vela) used to transport passengers and cargo from one lakeside village to the next. The whereabouts of this painting is currently unknown.

I was mistaken to claim (in an earlier version of this post) that Fischer never held an exhibition of his works in Mexico. It is now known that he definitely held an exhibit of watercolor paintings at the retail store of the Sonora News Company (Gante #4, Mexico City) in December 1914. (Mexican Herald) The fact that the store received “a new collection of Paul Fischer water colors of Mexican scenes” in March 1915 suggests that Fischer maintained an ever-changing selection of his paintings for sale at the store, one of the main locations where tourists could purchase artwork and souvenirs while visiting Mexico.

It is quite likely that Fischer would have known fellow artist August Lohr (1842-1920), who was also living in Mexico City at that time.

Fischer had close links to El Paso, Texas. In June 1906 he declared he was carrying $1000 with him—a considerable sum of money for the time—when he entered the US via El Paso. Fischer held more than one showing of his works in El Paso.

A Fischer painting in the SURA (formerly ING) collection in Mexico was included in a touring exhibition entitled “Horizontes. Pasión por el paisaje,” which showed in Guadalajara and several other cities, from 2005 to 2010. The biography of Fischer attached to the SURA collection in Mexico says that he held his first exhibition in El Paso in 1910. The precise location is unclear. In April 1926 an exhibition of his work was held in the Woman’s Club of El Paso.

The El Paso Museum of Art, El Paso, Texas, has amassed a significant collection of his works, and hosted a showing, with catalog, in September-October 1963, entitled: An Exhibition of Watercolors by Pablo Fischer, 1864-1932. Several members of the artist’s family attended the opening reception. Prior to the exhibition, the museum asked local residents for the loan of any Pablo Fischer paintings in their possession, since “The painter was very popular in this area about 50 years ago.” It is believed that some of his paintings were brought to the El Paso area by his son.

Note – This is an updated version of a post first published 15 January 2015.

I am very grateful for the help offered by art researcher Juan Manuel Campo in improving this post.