August Lohr was an Austrian landscape artist, born in 1842 in Hallein, near Salzburg. Lohr lived and worked in Europe, the U.S. and Mexico. After studying at the Royal Academy of Fine Arts in Munich, Germany, Lohr initially specialized in painting Alpine scenery. He and his Austrian wife, Franziska Geuhs, had three daughters, Rosina, Elise and Elsa, all born in Munich. From 1879 to 1881 Lohr worked with the Munich art professor Ludwig Braun to paint a panoramic view of the Battle of Sedan. The two men also worked on panoramic scenes of the battles of Weissenburg and St. Privat.

By 1884, Lohr had traveled to New Orleans to supervise the installation of the panoramic painting The Battle of Sedan, displayed for the World’s Industrial and Cotton Centennial Exposition in New Orleans (1884-1885). Later in 1884, Lohr joined William Wehner in establishing the American Panorama Company in Milwaukee, where they commissioned approximately twenty German artists to paint monumental “cycloramas” depicting the Storming of Missionary Ridge, the Battle of Chattanooga and the Battle of Atlanta.

Although his name was still listed in the 1890 Milwaukee city directory, he left Milwaukee for Mexico in December 1890. 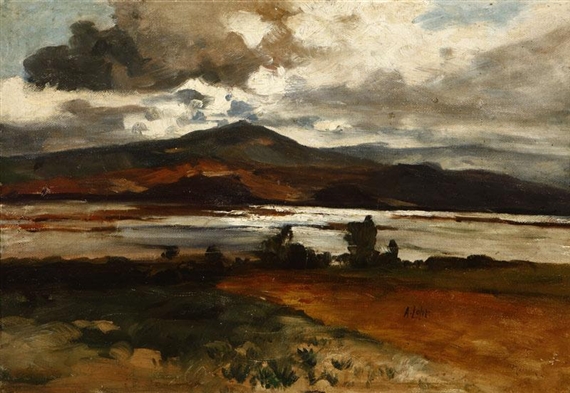 Lohr established himself in Mexico City and began to take on commissions including interior decorations and murals.

In September 1898, when it was reported that “Mr August Lohr, the well known landscape painter,” had just left the city for California to paint “a grand panorama representing the battle of Manila for an American syndicate,” Lohr had only just “completed painting the interior decorations of a restaurant” with his daughter, Elsa. While Lohr was in California, Elsa was busy painting decorations for the Requiem mass about to be held “in the Profesa church in memory of the Empress Elizabeth of Austria.” That church is in downtown Mexico City. (Mexican Herald)

“The Battle of Manila Bay” was painted in 1898, after the end of the Spanish American War (1895-1898), by Lohr and several other panorama artists in San Francisco. The following year, the San Francisco Sentinel reported that he was the manager of a company that was planning to exhibit panoramas in Mexico.

The Lohr home in Mexico City was in the Santa María suburb.

Only a few months before Lohr embarked on a trip to Europe in 1909, he had designed the decorations for the Aztec parlor at the then recently opened Hotel Geneve on Calle Londres. According to a contemporary news report, the Hotel had “four public parlors, each with different decorations.” The Aztec parlor was intended to showcase “an invaluable collection of genuine Aztec relics” which “should prove of immense interest to the tourists…”

Lohr continued to reside in Mexico with his family until his death in 1920. Mexico paintings by Lohr are known with dates ranging from 1899 to 1915.

In 1891, Lohr’s painting of Chapultepec Castle was exhibited at the San Carlos Academy in Mexico City. In 1899, Lohr exhibited two landscape paintings (of Mt. Tamaulipas and the Santa Cruz Mountains in California) in San Francisco at the Mechanics Institute Fair.