“A Gringo”—an English-speaking traveler about whom very little is known—arrived in Mexico in 1883. He was an observant and enthusiastic visitor. In the preface to his book Through The Land of the Aztecs or Life and Travel in Mexico (published in 1892), “A Gringo” states that his objective “is simply to give a plain account of several years experience in the country, to show its recent progress and to enable the reader to judge the future,” based on “prolonged periods of travel over the greater part of its territory, by rail, stagecoach and steamer, on horseback and in canoes [which] have afforded me exceptional facilities for studying the country and all classes of the people.” Contemporary adverts for the book claimed it was based on “seven years’ life and travel in Mexico.” 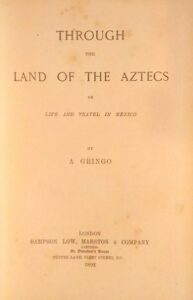 In a previous version of this post “A Gringo” was identified as Arthur St. Hill. This identification echoed my introductory comments to a short extract of his work published in Lake Chapala Through the Ages: an anthology of travellers’ tales (2008).

The attribution of the pen name “A Gringo” to Arthur St. Hill was based on the bibliographic details given for Through The Land of the Aztecs in the catalogue of the Bodleian Library of the University of Oxford (and subsequently used by several booksellers offering secondhand copies of the book).

I am now certain that this attribution is incorrect. Digging into genealogical databases reveals only two individuals named “Arthur St. Hill” living at about the right time. One was born in Barbados in the West Indies, and the other in the UK.

The Barbados-born Arthur St. Hill (Arthur Bertram St Hill) lived from 1872 to 1911. He was a cricketer and the author of a report on the Barbados health system published in 1896; he has no obvious connection to Mexico.

As an adult, the other Arthur St. Hill (1878-1969) lived in Bristol, UK, and worked as a structural engineer specializing in the use of steel. In any event, given that Through The Land of the Aztecs is a book based on several years of residence in Mexico in the 1880s, when Arthur was only a child, he clearly could not have been its author.

However, his father—Charles Manwell St Hill, born in Trinidad in 1849—does have provable connections to Mexico. At the time of the 1881 UK census, Charles, then aged 32, lived in London and worked as a commercial clerk. He had married Louisa Le Maitre de Rabodanges in March 1871 and the couple had five children. Their eldest child, Mabel, was born in Sevilla, Spain. Her siblings were Eva, born in Calais, France; Hilda and Arthur, both born in Mortlake, Surrey; and Houghton Oliver, born in Middlesex.

The 1891 UK census lists Louisa St. Hill as head of the household; she is living in Bristol with her five children and her mother. This census describes Luisa as “married” and does not mention Charles, who was presumably living in Mexico at the time. The next census, a decade later, lists Louisa as “widowed,” so Charles must have died between 1891 and 1901. The notice of Arthur’s marriage in 1911 lists his father as “the late Charles Manwell St. Hill, banker, of Mexico.” [Western Daily Press, 16 June 1911] A family tree on Ancestry.com, which states that Charles died in Mexico, provides no further details or sources.

Based on these admittedly scant details, I believe that the likely author of Through The Land of the Aztecs was Charles Manwell St. Hill. The misattribution of authorship to Arthur St. Hill in the Bodleian Library and elsewhere may have come about because Arthur registered his inherited rights to the book after his father’s death.

Through the Land of the Aztecs

One contemporary review called the work an “interesting little book descriptive of life and travel in Mexico from 1883 until a recent date,” and congratulated the author “on the felicitous manner in which he has performed his task.” The reviewer found that the book was “a pleasantly written handbook” though it lacked a map, an omission that “is really unpardonable.”

“A Gringo”‘s visit to Chapala definitely took place prior to 1889, though it was not published until a few years later (1892). The author starts by summarizing his trip to Chapala, which would have taken close to 12 hours:

Taking a carriage, which ran weekly between Guadalajara and Chapala, a town on the border of the lake of that name, I set forth one morning, and, after climbing a hill, from which a grand view of the city and surrounding countryside was obtained, I reached Chapala.”

He provides only the briefest of descriptions of the village of Chapala, commenting on the inn where he stayed and the moonlight on the lake:

Chapala lies at the foot of a hill, overlooking the lake, the waters of which lapped the little garden of the inn where I put up. After a supper, with the agreeable addition of a bottle of lager beer, I spent the evening chatting with the pleasant old people who kept the inn, and enjoying the still night as I watched the moonbeams playing on the lake, on which loomed the black shape of the paddle steamer that was to take me tomorrow across its waters.”

“A Gringo” gives us a rare description of taking a trip aboard the Libertad (“Freedom”) paddle steamer around the lake to the various lakeshore villages. The San Francisco-built Libertad had been brought to Lake Chapala in 1868 by the Compañía de Navegación por Vapor en el Lago de Chapala (Lake Chapala Steamboat Company), whose managing director was a transplanted Scotsman, Mr. Duncan Cameron.

It was a wonderful old tub, evidently built in the days when shipbuilding was “in its infancy, judging from its uncouth shape and old timbers, that creaked at every movement of the paddles. Our voyage took in several villages round the lake. At each stopping place we would land on the little mud jetties to suck a piece of sugar-cane or quaff a festive glass of tequila. At one of the villages a sad accident has since occurred; the crazy old steamer toppled over with her living freight of over two hundred passengers just as she reached the landing-stage, nearly all being drowned… One heroic American, employed on the Central Railroad, who was on board at the time, succeeded in saving the lives of sixteen by his pluck and great swimming powers.”

“A Gringo” also noted that efforts had been made to exploit an underwater petroleum deposit at Lake Chapala:

At one place the captain called my attention to a spot where the water was bubbling, and told me that at the bottom of the lake there was a petroleum well. Although efforts had been made to utilize it, they had hitherto been unsuccessful.”

“A Gringo” disembarked from the Libertad at La Barca, from where he continued his wanderings around Mexico.

If anyone can supply any additional biographical details about “A Gringo”, please get in touch!