In the 1940s, two superbly written books introduced readers in the U.S. and U.K. to life in the village of Ajijic. Both have remained perennial favorites on the must-read lists of anyone interested in Lake Chapala. Village in the Sun and House in the Sun were both written by “Dane Chandos”, who later wrote several travel books. 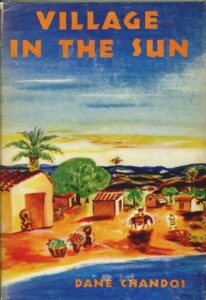 The cover art has a tiny signature (below). If anyone knows who this cover artist is, or anything more about them, please get in touch!

Signature of cover artist, Village in the Sun.