Gayle Jemison Hoskins was born into an American military family in Ancón in the Canal Zone of Panama on 28 July 1920 and died in Henrico, Virginia, on 6 January 2010. Jemison Hoskins, as he was usually known, attended the Robert E. Lee High School in Jacksonville, Florida, and served in the U.S. Navy between 7 December 1942 and 8 May 1946.

Shortly after his military service, Hoskins was “a guest instructor with the Mexican Art Workshop in Ajijic and Taxco”. This means he was in Ajijic for one of the summers between 1947 and 1949 inclusive. 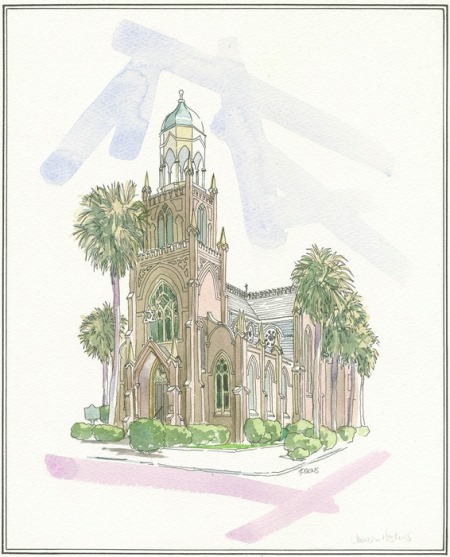 Unfortunately, I have failed to find any details relating to his time at Lake Chapala, or examples of his work there. If you can help, please get in touch!

He studied in New York City at the Art Students League, gained a bachelor’s degree from the University of Florida, and a Masters in Fine Art from the University of North Carolina. He subsequently taught visual arts at Maryville College (Maryille, Tennessee), St. Andrews College (Laurinburg, North Carolina), Louisiana Tech (Rustin, Louisiana), and, beginning in 1967, was Assistant Professor of Art at the Wesleyan College in Macon, Georgia, where he remained at least until 1971.

He retained links to Florida, where he grew up. In 1967, for instance, Hoskins gave a six weeks summer art course for teenagers at the Norton School of Art in West Palm Beach.

Records exist for several art exhibits featuring Hoskins’s own work. Venues for these include Laurinburg, North Carolina (September 1961 and March 1962), at the Louisiana Tech (March 1967) and the Gallery 209 in Savannah, Georgia (1992),

Gayle Jemison Hoskins also wrote a book, Criteria for a Painter Today, published by the University of North Carolina at Chapel Hill in 1959.