The second strand of the pen name Dane Chandos, and indeed the originator of the name, was Peter Lilley. How, when and where Lilley first met Nigel Millett is currently unknown but they became literary collaborators and good friends during their time in Ajijic… 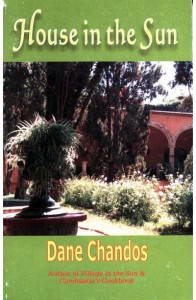 Peter Lilley is not known to have published anything under his own name, or any nom de plume, prior to the books about Ajijic.

The name Dane Chandos was conjured up by Lilley himself, since it combined his nickname at Stowe – “Dane”, on account of his blond hair and square, Danish-looking jaw – with Chandos, the name of one of the school’s boarding houses. Interestingly, though, Lilley had actually spent his own school years in a different house, Grafton.

Village in the Sun tells the story of building a house (located in real life in San Antonio Tlayacapan). The house was Peter Lilley’s home in Mexico. In House in the Sun the author has added extra rooms for guests and taken on the role of amateur hotelier, “held hostage by maddening servants and equally unpredictable and maddening guests.”

The two books share many of the same characters.

Leslie Chater and his wife, Moreen, long-time friends of Lilley, eventually became the new owners of the house in San Antonio Tlayacapan.

A chance find there in a desk drawer by Moreen Chater caused her to revive the Dane Chandos brand in 1997, long after all three original Dane Chandos authors had died. Chater stumbled across a “scruffy folder” containing a manuscript of recipes “faintly typed and badly eaten by mice.” Providentially, these proved to be Candelaria’s original recipes, with notes and anecdotes added by Lilley. Chater used them to compile Candelaria’s Cookbook, an unusual bilingual book of more than forty recipes (and related stories) sold as a fund-raiser to support projects benefiting children in San Antonio Tlayacapan.