David and Helen Morris were well-known potters who lived for several years in Guadalajara and Ajijic in the late 1940s and early 1950s, before moving to the San Francisco Bay area of California.

David Morris was born in 1911 in Washington D.C., where his father was a doctor at Walter Reed Army Hospital. Morris graduated from Georgetown University and was then employed in the city to head the arts section of the Work Projects Administration, a New Deal program, in the 1930s. This is when he first met Helen, a dance student. The couple married in 1937, and spent their honeymoon in Mexico.

During the second world war, Morris served in the U.S. armed forces in Europe and the Pacific. After the war, they returned to the Washington D.C. area for a short time where David Morris studied at the Institute of Contemporary Arts, presumably on G.I. Bill funds. He transferred his G.I. Bill tuition for a Masters degree in Fine Arts to the University of Guadalajara and the couple moved to Mexico in the late 1940s. (Their son Nicolas was born in about 1949).

David Morris had several works – one tempera, one watercolor, one monotype, and four ceramic pieces – included in the end-of-academic-year exhibition at the Fine Arts school of the University of Guadalajara in June 1951. 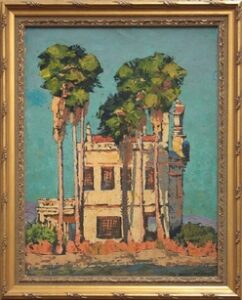 The family subsequently settled in Ajijic (they were definitely living there by mid-1951), where they became active members of the area’s growing artistic colony of the early 1950s. At this time, David was better known as a painter, though the couple were beginning to develop their extraordinary skills as potters. Among his Mexican paintings is an oil on board, entitled “Railroad Station at Lake Chapala”, dated to 1950, which was sold at auction in California in 2009.

While in Ajijic, the couple were good friends of black American painter Ernest Alexander (“Alex”), who ran the Bar Alacrán (Scorpion Bar) in Ajijic. Alex, his common-law wife Dolly and their son Mark, moved to the San Francisco Bay area at about the same time as David and Helen Morris did.

The couple returned to California in 1953, where they became political activists and began to work together as potters. Living and working initially at 701, Humboldt Street, David and Helen Morris began to produce exquisite ceramic pieces that quickly gained national attention.

David Morris was active on the committee behind the Sausalito Art Festival, held in November 1956, on the Casa Madroño grounds, and even performed as a singer at that festival. He continued to be actively involved in organizing several other Sausalito Art Festivals, including those held in May 1957, October 1957 (which drew record crowds of almost 20,000 over three days) and June 1958.

In June 1957, Morris was the spokesperson for a group of 60 freelance artists who objected to the regulations imposed for exhibitors by the organizers of the annual Marin Art and Garden Show, which, despite receiving public monies was open only to paid-up members of the Marin Society bf Artists. The freelance artists argued that entry should be open to all regardless of whether or not they were members; their petition was upheld by the Marin County Board of Supervisors.

They were riding the crest of success when, in 1960, their first joint studio, in a former boatyard in Sausalito, California, was totally destroyed by fire. According to the last verse of a song written shortly afterwards by Malvina Reynolds, the blaze was not without its silver lining:

In the midst of smoke and ruin, old David Morris stands,
A look of wonder on his face, a pot shard in his hands,
It has a wond’rous color never seen on hill or plain,
And they’ll have to burn the boatyard down to get that glaze again.

(From “Sausalito Fire” by Malvina Reynolds, 1960. The song was published in her Little Boxes and Other Handmade Songs)

Undeterred for long, David and Helen Morris soon built a new studio in Larkspur, where they would go on to craft more than 10,000 pieces of stoneware and porcelain, some of which found their way into the permanent collections of the Smithsonian Institution, the Everson Museum of Art in Syracuse, New York, and other museums.

The couple worked closely together and shared a single wheel in their studio. A contemporary account says that while David worked on the larger pieces, Helen crafted the smaller, more delicate forms. According to art critic Tom Albright, David Morris was particularly adept at creating “rich, lush glazes”, based on ancient Chinese techniques.

David and Helen Morris and their work were regularly featured in ceramics-related magazines of the 1950s and 1960s. For example the April 1960 issue of Ceramics Monthly had a photograph of the couple at work in their studio on its cover, and an illustrated 3-page feature article about them and the “crystalline” stoneware glazes they had developed.

Despite their aversion to taking part in juried shows, their stoneware won numerous awards, including a first prize in the Berkeley Art Show in July 1957.  In April 1958, David Morris was invited by the Artist League of Vallejo to highlight the official opening of their new building in Vallejo.