Julián Pulido Pedrosa was one of the group of talented artists who formed the Jovenes Pintores de Ajijic (Young Painters of Ajijic) in 1977.

Tragically, a decade later, Ajijic-born Pulido died on the highway between Tuxcueca and Tizapán el Alto in mysterious circumstances, while still a young man, not yet thirty years of age. He had already proved himself to be an outstanding artist, one of the first generation of local Ajijic artists to impress art critics with their extraordinary talents and creativity. Who knows how far Pulido might have taken his art had he only lived longer. Julián Pulido left behind his wife, Delma, and their three young children. In the wake of the tragedy, local and foreign artists organized an art sale (at the home of David Finn) as a benefit for his widow and children.

Like most other members of the Young Painters of Ajijic, Pulido first developed an interest in art during classes at the Children’s Art Program, organized by Neill James. 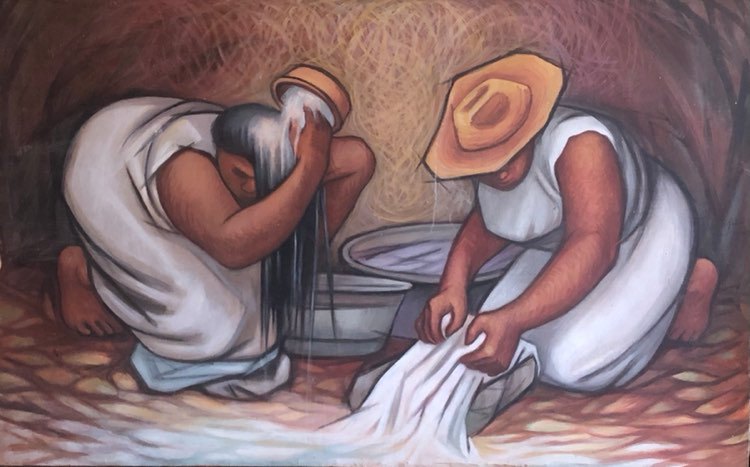 Studying alongside Pulido at the University of Guadalajara was another young local artist, Dionicio Morales. The two students held a joint exhibition of their watercolors, paintings and drawings at the Galería del Lago in Ajijic from 29 August to 11 September 1975. (The news was relayed to the English-speaking community in Joan Frost’s very first column for the weekly Guadalajara Reporter; Frost went on to become one of the paper’s most regular and dependable contributors.)

In 1977 the Guadalajara Reporter informed readers that Morales and Pulido had won the top two prizes in a Latin America-wide competition held to select artwork for the 1977 calendar of The International Federation of Family Planning. [If anyone has a copy of this calendar, please share!]

An exhibit which opened at the Instituto Anglo-Mexicana de Cultura in Guadalajara in October 1980 featured the works of Pulido and Morales alongside the work of a third Ajijic artist, Jesús Real.

Work by Julian Pulido Pedrosa (c. 1958-1987) is deservedly included in the permanent collection of the Ajijic Museum of Art.