After 1974, when Neill James, the Grande Dame of Ajijic, closed her store and retired, the wonderful gardens of her home – Quinta Tzintzuntzan – were no longer normally open to the public.

However, in 1977, James agreed to open her grounds every Sunday afternoon as an art garden (jardín del arte) for a new artists’ group, the Young Painters of Ajijic (Jovenes Pintores de Ajijic). Most of these young artists had started out by taking the free weekly classes at the children’s libraries James had started. Those classes were the very beginning of the very successful Children’s Art Program, now run by the Lake Chapala Society. 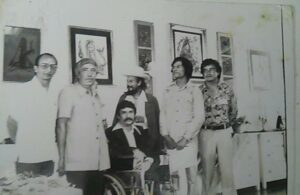 The first show by the Young Painters of Ajijic was held from 11.30am to 4.30pm on Sunday 28 August 1977. The show included oils, acrylics, watercolors, charcoal drawings and prints, and the artists had combined sales totaling over $12,000 pesos ($550). Exhibitors at the event, besides those named above, included Antonio Cárdenas Perales and Victor Romero. Entertainment was provided by the Folkloric Dance Group of Ajijic and the wind music group of Luis López. 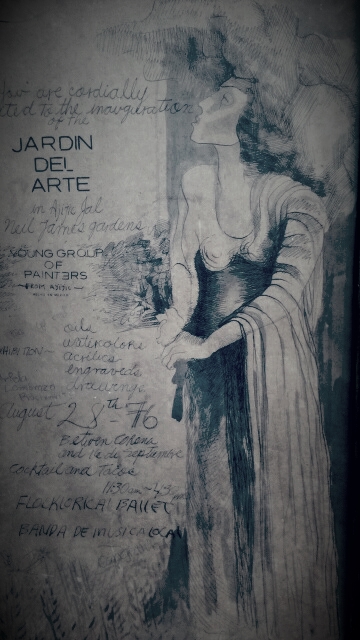 Poster for inaugural event [Handwritten year should be ’77]

The Sunday “garden of art” shows were a regular weekly event for some time. The first non-Mexicans to exhibit with the group were Diana Powell and Sid Schwartzman.

The following year, in mid-March, the artists held what was billed as Ajijic’s “first annual cultural week” in the gardens, with art exhibits, guitar concerts and ballet recitals, among other attractions. On this occasion, the entertainment included the Folkloric Dance Group of the University of Guadalajara (directed by Rafael Zamarripa), concerts performed by the U. de G.’s School of Music and a group conducted by Javier Garabito Tovar (standing on the left of the photo), as well as a stage play – “El Demonio Azul” (The Blue Devil) – directed by Félix Vargas (seated in the wheelchair in the photo).

Despite hopes for a repeat event the following year, sadly the 1978 week-long show was the only “Ajijic cultural week” ever held.

The Young Artists Group was the forerunner of the Asociación de Artistas de Ajijic (AAA).

My sincere thanks to Dionicio Morales and Antonio López Vega for generously sharing their memories of the Ajijic Young Artists Group.