The talented visual artist Sidney Schwartzman was born in New York City on 2 June 1917 and lived almost thirty years in Ajijic from about 1973 until his death there, at the age of 84, on 27 March 2002.

Schwartzman, the son of two Russian-born immigrants, grew up in New York and was a member of the honor society, Arista, at a public high school (the Thomas Jefferson High School, according to The Brooklyn Daily Eagle, though he told his son he attended the Dewitt Clinton High School).

In an interview late in life, Schwartzman recounted how especially proud he was that, at age 8, one of his paintings (of a circus) had been chosen for a school art exhibition at the Metropolitan Museum of Art in New York.

He initially wanted to be a writer but thought the school’s writer’s club snobbish, so joined the art club instead. He later took drawing and paintings private lessons and decided to dedicate himself to his art. He painted his first nude while in high school and took art classes at the New York Adult Evening School of Art and the Art Students League with American illustrator and painter Churchill Ettinger (1903-1984). While living in New York, Schwartzman also taught children and the physically challenged under the auspices of the Works Progress/Projects Administration.

Schwartzman, a conscientious objector, was imprisoned for about a year during World War II for declining to serve in the military. He had married Elizabeth Mary Murphy and Schwartzman was released on parole shortly after the birth of their son, David, in June 1944. 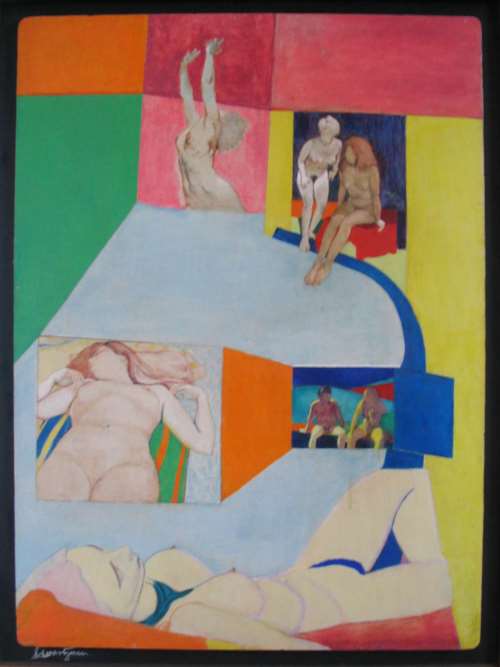 In about 1946, Schwartzman moved to Washington D.C. where he worked as a night janitor (and sometimes watchman) at the Corcoran School of Art while taking classes there under the Hungarian-born artist Eugen Weisz (1890-1954). Schwartzman was encouraged to experiment with different styles and his vibrantly-colored landscapes and nudes began to sell. He also held his first solo exhibition at about this time either in Bethesda or Arlington, Virginia (the family records are unclear on this point).

From 1948 to 1959 Schwartzman lived in Woodstock, Vermont. Each time he moved he left behind most or all of his completed paintings and started a new phase in his artistic career. This has made it very difficult to document his lifetime’s work, though each phase stimulated fresh artistic exploration and discovery.

In 1957, he was lucky to survive a single vehicle accident in Woodstock, in which his brother-in-law Stanley Murphy was killed instantly. Schwartzman, who had been driving, was devastated by this loss.

Two years later, in August 1959, Schwartzman was one of a very large number of artists exhibiting at the annual Cracker Barrel Bazaar art show in the village of Newbury, Vermont, alongside such distinguished painters and illustrators as Norman Rockwell and Maxfield Parrish.

In 1959, Schwartzman moved to Los Angeles, California, where he lived and worked for about a decade. He had a job with TV Fanfare Publications and appears to have lost interest in painting (for the only time in his life) for a few years. He then took a small studio in Hollywood where he painted ten major, large paintings many of which are still in the family, before moving to Sunset Boulevard in Echo Park where he later opened (with son David as partner) the Woodstock Gallery .

Work from this time formed the basis for the joint show he held at this gallery in 1972, with friend Tom Darro, entitled “Life Drawings”.  The exhibition was later repeated at the Livingstone Evans Gallery, on North La Cienega Boulevard in the same city. The gallery was not a financial success and Schwartzman decided to abandon Los Angeles and visit Mexico. His mother-in-law had lived for a short time in Ajijic in the 1950s, so Schwartzman headed for Lake Chapala. 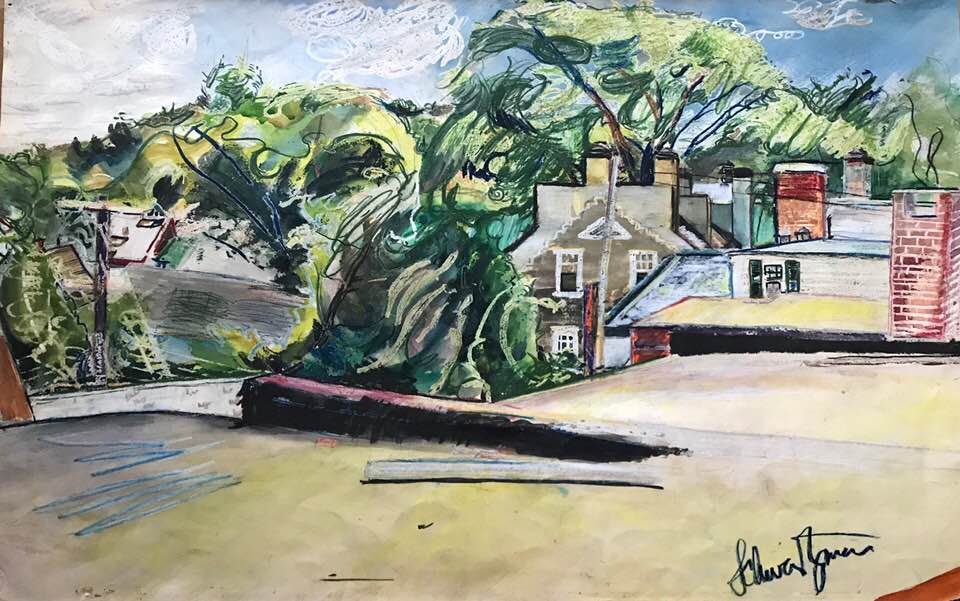 Schwartzman, whose eyesight was failing, arrived in Ajijic in about 1973, after living for a few months in Jocotepec. In Ajijic he shared the “Mill House”, at the foot of Flores Magón street near the lake, with fellow artists John K. Peterson and Ernesto Butterlin. After successful cataract surgery, the mustachioed, bushy-haired Schwartzman became artistically active again, producing numerous pencil sketches and paintings of nudes. He made fairly frequent trips back to Los Angeles, and brought some of his American work back with him to Ajijic. These trips also enabled him to renew his Mexican tourist papers every six months.

He shared a studio from about 1974 with Daniel Palma at Constitución #45A, Ajijic. He also had a studio for a time in the building that is now the office of the Lake Chapala Society. Initially, Schwartzman was not a frequent exhibitor, concerned that his prolific output of nudes might antagonize some viewers.

Schwartzman held an auction of his paintings and sketches at El Tejaban (Zaragoza #1) in Ajijic, on 17 November 1974. The pieces included “figurative sketches, mixed media and oils”, with reserve prices ranging from 250 to 9000 pesos.

The following month, he participated in another art auction, this time at the home of Frank and Rowena Kirkpatrick in San Antonio Tlayacapan, with the proceeds going to local charities. Other artists whose work was auctioned on that occasion included Rowena Kirkpatrick; Rocky Karns and Antonio Santibañez. 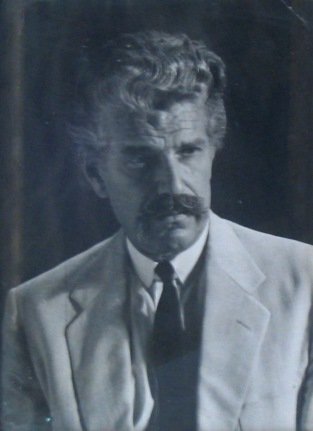 Schwartzman was a member of Clique Ajijic, a grouping of eight artists that held several group shows in 1975 and 1976: in Ajijic, Chapala, Guadalajara, Manzanillo and Cuernavaca. The other members of this very talented Mexican Group of Eight were  Tom Faloon, Hubert Harmon,  Todd (“Rocky”) Karns, Gail Michaels, John K. Peterson, Synnove (Shaffer) Pettersen, and Adolfo Riestra. Pettersen, the youngest of the group, credits Schwartzman, whom she recalls as easy-going but serious about art, with being very encouraging of her own artistic efforts.

According to a review of a group show in Guadalajara in 1975, Schwartzman had also exhibited his mixed media works in Los Angeles, San Francisco, Washington D.C. and Boston. Fregoso added that his canvasses, influenced by Schwartzman’s time in Vermont, had “an incomparable beauty” that invited refection.

In the early 1980s he shared a studio at the intersection of Zaragoza and Colón, first with Julian Pulido and later with Dionicio Morales.

In the late 1980s, with the help of local art patron Sally Sellars, who purchased several of his works, Schwartzman opened his own gallery in Ajijic where several noteworthy shows were held. Among those whose work was exhibited at the gallery were American CIA agent Mitch Marr Jr., local Ajijic-born artist Efren González, the talented mixed media and textile artist Hey Frey, and the former Hollywood star Todd (“Rocky”) Karns. The Karns exhibit opened on 10 December 1988.

The Sellars-Schwartzman Galería, at Felipe Angeles #12 in Ajijic, held annual auctions to benefit Oak Hill School (Ajijic’s only bilingual school at the time) and the galley remained the artist’s main working space until shortly before his death.

In 1980 Schwartzman married his Ajijic girlfriend Regina Galindo, taking on the responsibility of helping raise her four daughters, one of whom later married local Ajijic artist and muralist Efrén González. Schwartzman and Regina had two children of their own, both boys. [Born ca 1981 and 1984]

After 1990, the Casa de la Cultura in Ajijic held annual exhibitions of works by “invited members”. Schwartzman’s last showing of a painting in Ajijic was in one of these shows in November 1996. On display was Trapeze, an early “visual jazz” painting that collector Patrick Dudensing had given back to Schwartzman.

Dudensing had previously submitted Trapeze to a Special Collectors’ Show in 1994 at the South Shore Art Center in Cohasset, Massachusetts. Schwartzman was justly proud of the fact that his work had hung there alongside a Fernand Léger and not far from a Miró, a Picasso and a Chagall!

Schwartzman’s eldest son, David, arranged a posthumous show of his father’s works (paintings and drawings) at the Library in Woodstock, Vermont, in September 2013. In an interview at the time, David noted that his father “painted in an impressionistic – expressionistic style from the start of his professional career”, and that “He was infatuated with color theory and was considered a painter’s painter.”

I am greatly indebted to David Schwartzman, who is working on a book about his father, for sharing his knowledge and research. My sincere thanks, also, to Alan Bowers, Dionicio Morales and Synnove Pettersen for sharing with me their personal memories of Sidney Schwartzman.