Rowena Girault was a prolific painter and sculptor. Multi-faceted, multi-talented, and almost entirely self-taught, she moved to San Antonio Tlayacapan (with her husband, Frank) in the late 1960s and spent the remainder of her life there.

Rowena Katherine Girault was born to Peter Girault and Catherine Price in Chicago on 24 December 1914. The 1920 US census lists her ethnicity as Canadian. Her father died in 1929, when Rowena was barely in her teens, and she had completed only three years of high school when, aged 21, she married John Walter “Jack” Augustin (1912–1964), with whom she had a son, John. The family shared a residence with Rowena’s mother and younger sister in North Fond Du Lac, Wisconsin, until at least 1940, when John Walter joined the US military.

After this first marriage broke down, Rowena married William Lee Richards (1901–1983) in Chicago in 1944. As shown by the birth of their three children in, respectively, Chicago, Glens Falls (New York) and Hato Bay (Puerto Rico), they moved several times before establishing themselves in Puerto Rico. That marriage lasted about a decade.

By 1958, Rowena had taken her third husband and become Mrs Frank Kirkpatrick. In the early 1960s the couple were living on the Palos Verdes Peninsula, California. Rowena had spent much of her time and energy over the past two decades developing her art, and was determined to make a living from it. However, the art-loving public was having to pay far too much for original art, in Rowena’s eyes, after the various commissions and sales fees charged by agents, galleries and retail stores were taken into account. Rowena, who never signed artwork with any of her married surnames, decided to try a more direct way to reach potential purchasers, so she opened her studio to the public. According to one reporter, Rowena painted because she loved to paint, but wanted homes to have real oils, not prints, on their walls. 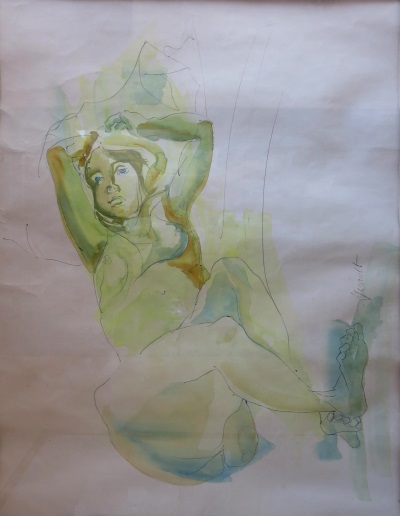 At about this time, the Kirkpatricks moved to Scottsdale, on the outskirts of Phoenix, Arizona, and Rowena joined the Scottsdale Artists League. There, pursuing her ambition to make original art more affordable, Rowena teamed up with other artists (apparently including her daughter Alix) in 1967 to offer “Original Oil Paintings by American Artists, complete with beautiful hand-carved frames” at various stores in Phoenix including Woolco, where shoppers could watch the artists at work. The paintings, in a variety of styles, were priced by size: $19.95 for an 8″ x 10″, $29.95 for 16″ x 20,” and $125.00 for 24″ by 36.”

The following year, she held a month-long solo show at La Petite Gallery and Studio in Phoenix. Kirkpatrick was one of several artists represented by the gallery, and her association continued even after the gallery became “The Rosenzweig Center Galleries” in 1969. One reviewer of her solo show at La Petite Gallery (September-October 1968) explained how:

Looking at one of Rowena Girault’s acrylics is like taking a step back into childhood. Remember those pictures that had animal heads, faces or toys hidden in tree branches, under rocks or a part of the sky?

Her paintings are like that. A painting of a western sky? Yes. But suddenly the clouds become a throng of wild stampeding horses. Look at the red rocks of Sedona and you realize that the rocky columns are also people.

The artist’s vivid imagination and pixie sense of humor were a delight to all who met her at the opening of her show.”

a sort of Phyllis Diller of the visual arts, being, seemingly, about equal parts housewife and artist with a streak of aesthetic madness…. Rowena Girault may whisk the old ham and turkey bones out of the soup stock to incorporate them in a sculpture as she whumps up her own peculiar recipe of modeling paste, marble dust, and a touch of broken glass.”

While I have not yet found evidence supporting Bucklew’s claim that Rowena had “taught at the Chicago Art Institute,” Bucklew offered a fulsome account of the varied styles and techniques on display, which ranged from broad palette knife to fine sable brush, from collage to ink, from abstract to representational. She was in awe of Rowena’s creativity:

The most amazing aspect of her work is a child-like abandon and enthusiasm that keeps it unaffected and loaded with surprises…. Throughout the works are spirited and uninhibited.”

After moving with her husband to San Antonio Tlayacapan in about 1968, the irrepressible Rowena (sometimes mistakenly called Rowene in local newspapers) Kirkpatrick gave art workshops and continued to paint. She also designed several stage sets for the Lakeside Little Theater and was an active supporter of local cultural events and charities, including the Ajijic Breakfast Fund.

Kirkpatrick held a solo show in August 1974 at the Galería del Lago when it moved from its original location on Ajijic plaza to Colon #6. She displayed 24 works, in a mix of styles, some in acrylics, others in oils or watercolors, and the show was an instant hit, with Allyn Hunt writing of “Buyers standing in line hoping to outbid one another for certain works.”

Plans were hatched to hold a similar charity art auction a few months later at the Ajijic home of Marion Carpenter. Fate intervened, however, and, at the age of 60, Rowena died on 1 April 1975 following surgery in Guadalajara.

Her remains were interred in the Chapala municipal cemetery.