The family lived mostly in California, first in San Francisco (1928), then Sacramento (from 1930-at least 1955). In September 1951, Lona and Max Isoard arrived back in New York from Le Havre, France, on board the SS Liberté.

A 1938 newspaper article reveals that Isoard was a well-known polo player: “Among the players in the first game, will be Mrs. Lona Isoard, prominent in state polo circles.” 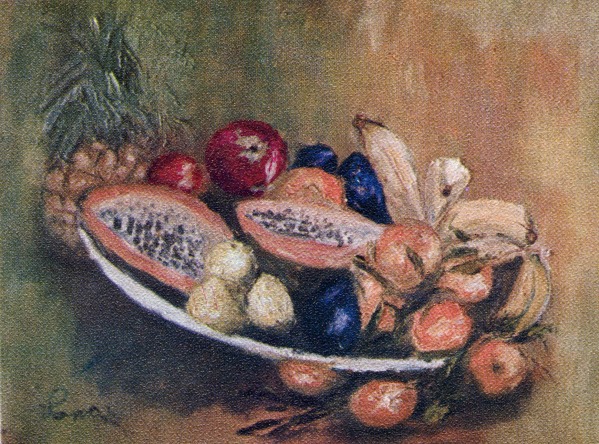 By all accounts, Lona Mae Isoard was quite an eccentric character. The late Tom Faloon commented to me that she was a “nutty lady”, adding that her sister and brother-in-law also lived in Ajijic. Katie Goodridge Ingram, former gallery owner, remembers that Lona lived at one time in the small, lakeside cottage belonging to “Russian” dancer Zara. (This cottage later became known as “Iona’s cottage”, taking its name from another eccentric American, a former teacher and world traveler, Iona Kupiec, who lived there from 1962).

In 1966, Lona Isoard remodeled a home in Ajijic at Calle Independencia #39 for herself, and an adjoining home, sharing the same street address, was occupied by her younger sister, Henrietta (and her husband, Herbert B. Phillips).

The following year, Lona spent three months visiting her daughter in California, where the two women acted together on stage in Oakland, California, in April 1967 in a production of the farce Botheration.

Lona showed a self portrait in the TLAC (Todos las artes combinados) show at Posada Ajijic in April 1978.

An example of Isoard’s work, a still life of fruit, was included (along with works by many of the other artists in the 1971 group show) in A Cookbook with Color Reproductions by Artists from the Galería (Guadalajara, Mexico: Boutique d’Artes Gráficas, 1972).

For more about the extraordinary history of the art community in Ajijic, please see the relevant chapters of Foreign Footprints in Ajijic: Decades of Change in a Mexican Village (2022).