Lowell D. Houser (1902-1971) lived and painted in Chapala, and later Ajijic, in the mid-1920s. He was subsequently hired to paint copies of Mayan murals for an archaeological survey of the Yucatán Peninsula.

Houser was born in Chicago on 18 May 1902. During his childhood, the family moved to Iowa, where Houser graduated from Ames High School in 1921. He then studied briefly at Iowa State University before switching to the Art Institute of Chicago. Lowell D. Houser’s long connection with Mexico began in the company of his fellow artist Everett Gee Jackson. The two had studied together at the Art Institute of Chicago.

Following a brief exploratory foray into Mexico, traveling just across the border from Texas into Coahuila, the pair of artists decided to venture further into Mexico, to the city of Guadalajara, in the summer of 1923. They later rented a house in Chapala.

They were among the earliest American artists to paint at Lake Chapala and Ajijic, though they were not the first, given that the Chicago artist Richard Robbins and Donald Cecil Totten (1903-1967), among others, had painted Lake Chapala before this. So, too, had many artists of European origin. Mexico, though, exerted a much more powerful influence over Houser’s art than it did over any of these previous visitors. 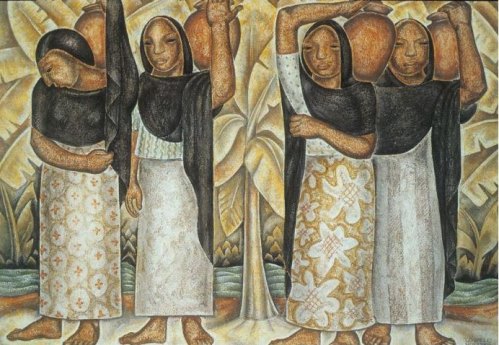 Houser’s “Maidens Carrying Water Jars” has been aptly described by James Oles as a “study in patterns… the women almost seem cut from the same mold, and even their faces lack individuality…”.

A chance encounter with the well-connected young author and art critic Anita Brenner (1905-1974) led to Houser being invited back to Mexico a couple of years later to be the illustrator for an archaeological group studying Mayan ruins on the Yucatán Peninsula.

After returning from Mexico, Houser lived for a short time in New York before returning to Ames to teach at the Arts Students Workshop in Des Moines (1933-36) and at Iowa State College (1936-37). Houser developed his own art career in oils, watercolors and block printing and also undertook commercial illustrations for books and magazines. While living in Ames, Houser worked under Grant Wood on nine murals for the new library at Iowa State College.

Houser was then commissioned by the Works Progress/Projects Administration (WPA; 1935-1943) to paint a mural in the town’s Post Office. The bold mural depicts the evolution of corn (maize), from both an indigenous Indian and more modern American farmer’s perspective.

In 1938, Houser accepted a position teaching printmaking, drawing and painting in the art department at San Diego State College, where his good friend Everett Gee Jackson was directing the art program.

Houser died in Fredericksburg, Virginia, in 1971.