Richard Smith Robbins (1863-1908) was a Chicago-based artist who painted Lake Chapala in 1898. According to a short piece in The Mexican Herald (12 December 1898): “Richard Robbins, the Chicago artist, who is at present in Guadalajara … has secured a number of sketches of the most picturesque points some of which he proposes to finish and exhibit in the States. One, a sunset on the lake, will be certain to attract attention.”

Given the date, it is tempting to suggest that Robbins possibly visited Chapala in 1898 in order to see for himself the Hotel Arzapalo, inaugurated earlier that year and sometimes attributed to architect Guillermo de Alba, who had been influenced by the Chicago School of Architecture.

Richard Smith Robbins was born in Solon, Ohio, on 3 February 1863. In 1890, he applied for a passport to visit Europe for “two or three years”. The application states that his father was a native citizen of the U.S., and that Robbins was an artist, living in Brooklyn, New York, who was 5′ 53/4″ tall, with dark blue eyes, a small nose, and hair turning gray.

In Europe, he studied at the Académie Julian, in Paris, France, with three great French artists of that time: Jules Joseph Lefebvre, Jean-Joseph Benjamin-Constant, and Henri Lucien Doucet.

On his return from Europe, Robbins lived several years in Chicago, where he was a member of the Cosmopolitan Club. 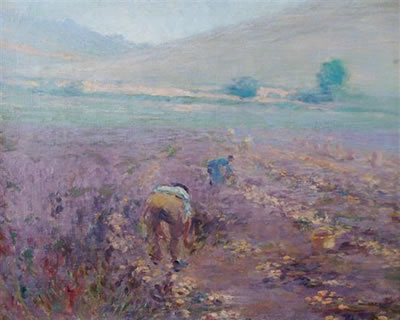 In 1895, he was on the Jury of Selection for Painting for the 13th Annual exhibition of the Palette Club at the Art Institute of Chicago. Six of his own paintings, priced between $50 and $100, were in the main exhibition: The Boat; Evening Star; Pine Lake Willows; Indiana; Blue and Silver; Winter Mist; Morning, Giverny, France. 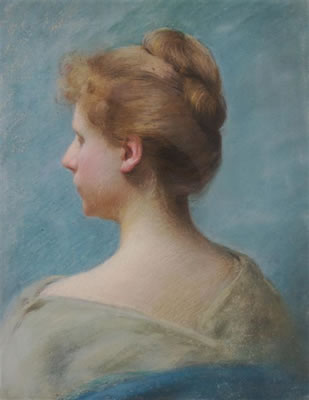 The following year, an art critic writing in The Chicago Tribune (24 March 1897) about The Third Annual Exhibition of the Arche Club, noted that although not a prize-winner, “Richard S Robbins has shown a delicate appreciation of light and color in “A Pleasing Tale”, an interior showing a young girl reading near a white-curtained window. Several good landscapes by the same artist are shown.”

Later in 1897, The Chicago Tribune (19 September 1897) reports that, “Richard S, Robbins has charge of an outdoor sketching class of pupils of the Art Academy. As long as the weather permits the class will go on expeditions to picturesque points in the vicinity of Chicago three days of each week.”

Among Robbins’s students in Chicago was the extraordinary Chicago landscape artist Guy Martin Chapel (1871-1957). Chapel lost his sight at age 62, and turned his talents to making braille greetings cards, using zinc sheets and a press made from an old clothes wringer. He was still a productive artist well into his 80s.

In 1898, Art Notes, Brush and Pencil noted that Robbins’ work is listed in a collection of about 150 pictures to be sold at auction in April by “a group of Chicago artists”. Robbins work was included in various exhibitions that same year, including the Chicago Art Exhibition; the Trans-Mississippi and International Exposition in Omaha, Nebraska (where Robbins exhibited a painting entitled A January Thaw; and the Louisville Art League.