Gerald Collins Gleeson (1915-1986) was an American artist, primarily known for his superb watercolors. He is known to have painted several watercolors in the Lake Chapala area in 1981, including a street scene titled “Chapala, Mexico” and a picture of the former Railway Station in Chapala (the historic building that is now the Gonzalez Gallo Cultural Center). 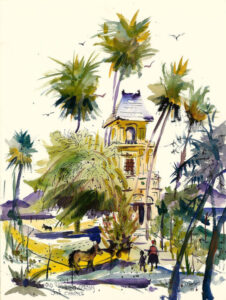 Gleason was born in Providence, Rhode Island and studied at the Rhode Island School of Design in the 1930s. After serving in the second world war, he studied art with Jerry Farnsworth in Truro, Massachusetts, before spending a year in Mexico, studying at Mexico City College. He then returned to the U.S., where he settled in Berkeley, California, and studied at the California College of Arts and Crafts in Oakland.

Typically, his watercolors portray street and harbor scenes. While painting and exhibiting regularly in the Bay area, San Francisco, he also gave painting and drawing classes.

Gleason was a member of the Allied Artists of America. Examples of his work can be seen in many museum collections, including the Oakland Museum and the San Diego Museum in California; Attleboro Arts Museum in Maryland; Rhode Island School of Design Museum; the Salmagundi Club in New York and Tampa Museum, Florida.

Other watercolorists who painted Lake Chapala: