Portrait artist Betty Warren, later known as Betty Warren Herzog, was born in New York City on 6 January 1920. Her brightly colored portraits were in such demand that she became one of the highest paid female portraitists of the 20th century. In 1940, at age 20, she became the youngest woman in US History to hold a solo exhibit at a major US Museum (Berkshire Museum). 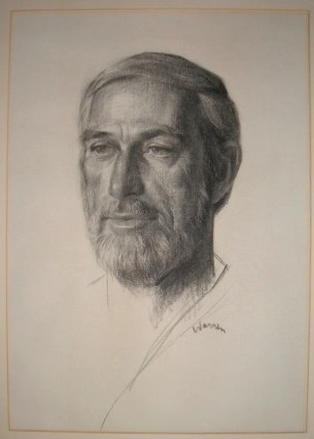 Betty Warren first visited Lake Chapala in February 1974, when she and her husband (Jacob Herzog) visited a friend—Everett J. Parrys of Albany—who was staying at the Villa Montecarlo in Chapala. Warren arranged to take the Helen Kirtland home in Ajijic for the following month to use as a studio. Two years later, Warren returned to Chapala, where she held a solo show of oils and drawings at the Villa Montecarlo in March. That show was sponsored by the Galeria del Lago (run by Helen Kirtland’s daughter, Katie Goodridge Ingram).

The following year, her third winter at the lake, Warren held another solo show of her works at the Galeria del Lago. That show ran from 26 February to 11 March.

In 1980, Warren was one of 11 painters whose work was shown in a group show in Guadalajara at the ex-Convento del Carmen. On that occasion, the other artists, almost all of whom had close ties to Lake Chapala, were Paul Fontaine, Daphne Aluta, Georg Rauch, Eleanor Smart, Richard Lapa, Stefan Lökös, Evelyne Boren, Digur Weber, Gustel Foust and Taffy Branham.

From the early 1980s, Warren and her husband spent her winters in Ajijic, where she maintained an art studio. 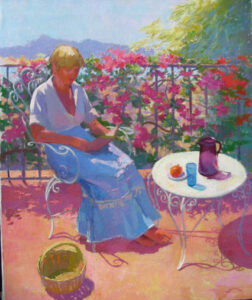 Betty Warren was the daughter of illustrator Jack A. Warren, cartoonist of Pecos Bill. She studied at the Art Students League in New York, the National Academy of Design, the Cape School of Art (summers, 1937-42) with Henry Hensche, Farnsworth School of Art, Sarasota, Florida, and the Reineke School in New Orleans. Warren was awarded an Honorary Doctorate of Fine Arts in 1991 by Hartwick College, Oneonta, New York.

She had more than 35 solo shows during her artistic career, and exhibited at Artists of the Mohawk-Hudson Region, Allied Artists of America, American Water-Color Society, National Arts Club, Knickerbocker Artists, New York, and the Grand Central Art Galleries. Her last formal portrait was of Governor Hugh Carey for the State of New York in 1991. She died in Albany on 8 November 1993.

Warren’s portraits can be found in the collections of the The University of Wisconsin; General Electric; University of North Carolina at Chapel Hill; Albany Institute of History and Art, New York; the Malden Bridge School of Art; Hartwick College, New York; the New York State Supreme Court in Albany; and the Grand Lodge of New York.

Note: This is an updated version of a post first published Oct 30, 2014